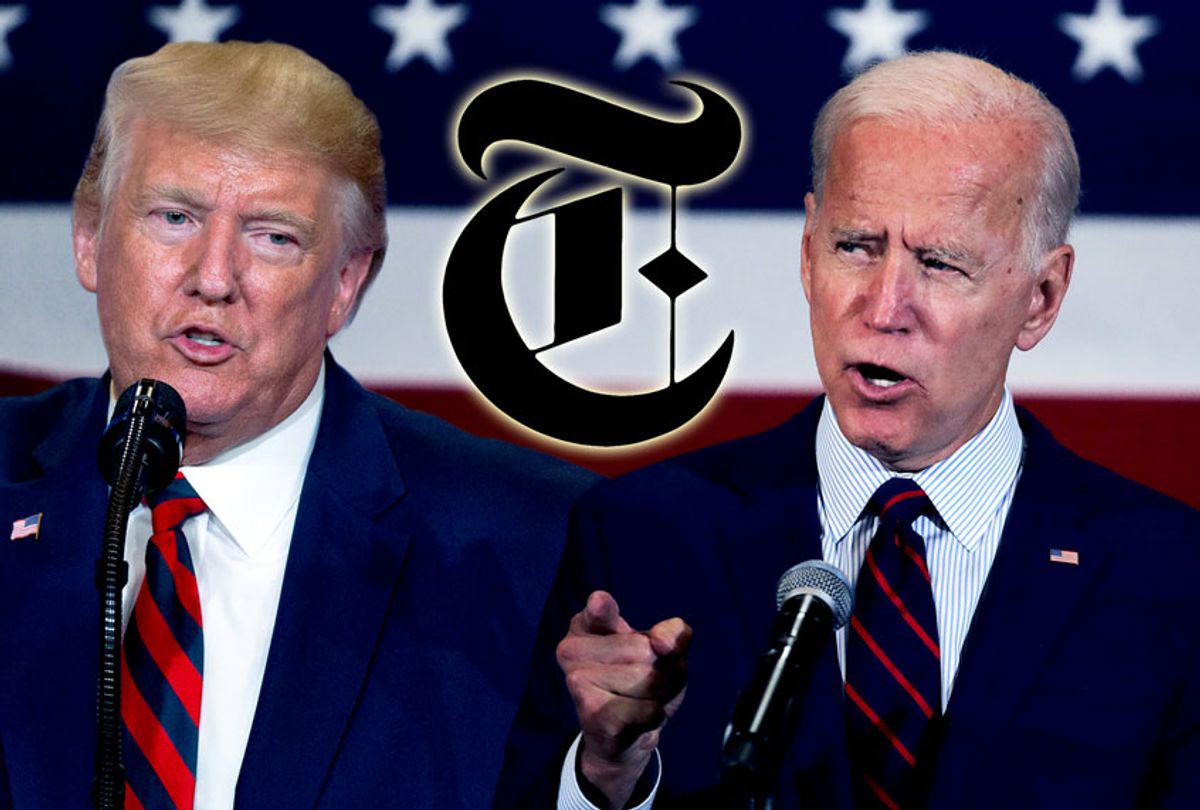 Joe Biden and his presidential campaign have clearly been unsure how and whether to punch back against Donald Trump's meritless conspiracy theory about the former vice president and his son, Hunter. Trump is obviously trying to deflect attention from his own likely crimes, the House impeachment inquiry and his terrible poll numbers. Finally Biden has decided to address the issue directly.

On Wednesday, during campaign events in New Hampshire, Biden finally joined all the other major Democratic candidates in endorsing the impeachment inquiry into Trump. More important, in an uncharacteristic act of daring, Biden's team called out the New York Times for elevating, laundering and promoting Trump's preferred conspiracy theories.

In a letter to Times editor Dean Baquet, Biden communications director Kate Bedingfield lambasted the newspaper for publishing an op-ed by right-wing hitman and Breitbart contributor Peter Schweizer, which was clearly meant to support Trump's discredited allegations that Biden's dealings in Ukraine were somehow corrupt.

That Times article "is really the latest maneuver in the Republican strategy of shielding President Donald Trump from his own scandals by redirecting attention to his political opponents," writes Eric Kleefeld of Media Matters. He also notes that Schweizer feigns outrage over private citizens such as Hunter Biden cashing in on his family name and political connections, but never mentions that the sitting president is actively running businesses around the world that are being used as money-laundromats for bribes from foreign leaders and business tycoons.

Bedingfield goes on to point out that, in May, Times reporter Ken Vogel published an article — which was swiftly debunked — insinuating that Biden had helped fire a corrupt Ukrainian prosecutor at his son's behest, a conspiracy theory that had previously "been relegated to the likes of Breitbart, Russian propaganda, and another conspiracy theorist, regular Hannity guest John Solomon."

What's particularly remarkable about that original Vogel article is that in his eagerness to smear Biden, Vogel completely overlooked the fact that his sources in Trump's camp were engaged in illegal or unethical behavior  — the pressure campaign on Ukraine which may lead to Trump's impeachment. Easily disproven allegations about Biden were given precedence over the shady and possibly criminal conduct of Trump and his team.

That's just one example in a long line of offenses committed by the New York Times when it comes to exaggerating or even imagining Democratic malfeasance while downplaying Trump's criminal or corrupt behavior. The Times spent much of the 2016 campaign hyping what should have been a minor story about Hillary Clinton's emails, while giving relatively short shrift to Trump's much more extensive scandals. It also helped promote Schweizer's book "Clinton Cash," which was riddled with falsehoods and errors and had an obvious political agenda.

Most critics of the Times, including me, have assumed that the paper's habit of scandal-mongering against Democrats while minimizing Republican corruption is born out of a desire to seem "balanced." Republicans are far more corrupt than Democrats, especially in the Trump era (in this reading), so the Times extends an almost limitless handicap to Republicans, favoring a false notion of "balance" over the unvarnished truth.

But the Biden letter suggests an even more sinister motive. Bedingfield asks Baquet whether his paper is "deliberately continuing policies that distort reality for the sake of controversy and the clicks that accompany it?"

As grim as that suggestion is, there's evidence pointing that way. Before he joined the Times, Ken Vogel worked at Politico, where he  specialized in elevating right-wing nonsense and passing it off as real news. In 2016, he hyped false claims by conservatives that Clinton was in poor health, using her brief campaign-trail illness as an excuse to spin out far-fetched scenarios. Vogel also reported on breathless insinuations about the Clinton Foundation, without ever finding any real evidence of any actual wrongdoing — and only bothered to look at the Trump Foundation's history of dodgy and illegal dealings after Trump had won the election. When called out about caring more about minor or irrelevant Clinton stories than actual Trump scandals, Vogel's response was snide and condescending.

Despite this, the Times hired Vogel. Or would it be better to say it wasn't despite that history, but because of it? As the Biden team's letter suggests, there's money to be made in pimping out BS right-wing conspiracy theories, and Vogel has shown undeniable skill at cleaning up this Breitbart-flavored nonsense and passing it off as news.

Since the 2016 election, research has shown that out-and-out  fake news — most of which promotes right wing interests — is a lot more viral than real news. The reasons are simple enough: Outlandish claims and conspiracy theories feel novel or original, and tend to push people's emotional buttons.

So it's not much of a leap to suggest that the not-quite-fake-but-certainly-misleading stories that the New York Times has been pushing — such as stories about Clinton's emails or Biden's Ukraine dealings — are clickable and exciting.

Stories about Trump doing illegal or corrupt things are dog-bites-man stories, as predictable as the weather. But stories implying that the relatively clean Democrats might be secretly dirty, and that beneath the surface all politicians are equally corrupt? That's man-bites-dog stuff, exciting and novel and intriguing. That gets clicks.

The fact that such stories often turn out to be not exactly what you'd call true doesn't much matter — the reader finds that out only later, if at all. Maybe they find out in the story itself, as when a New York Times headline suggested a big exposé on House Intelligence chair Adam Schiff, D-Calif., only to reveal that, actually, Schiff's behavior was entirely aboveboard.

Sometimes the nothing-burger status of the story comes out only when other publications debunk the Times angle, as happened with Vogel's story suggesting that Biden's Ukraine conduct was corrupt. Either way, Times editors seems to have learned that the promise of dirt on Democrats is first-rate bait, and don't seem too worried if that dirt is largely an illusion.

In that sense, it seems the New York Times did learn the lesson of 2016, insofar as it has chosen to put clicks and cash ahead of journalistic integrity. After all, the Times is now doing pretty well in an era when other media outlets are struggling to stay afloat. Trump's conspiracy theories may be bad for democracy, but it looks like they're good for a certain business model in "journalism."