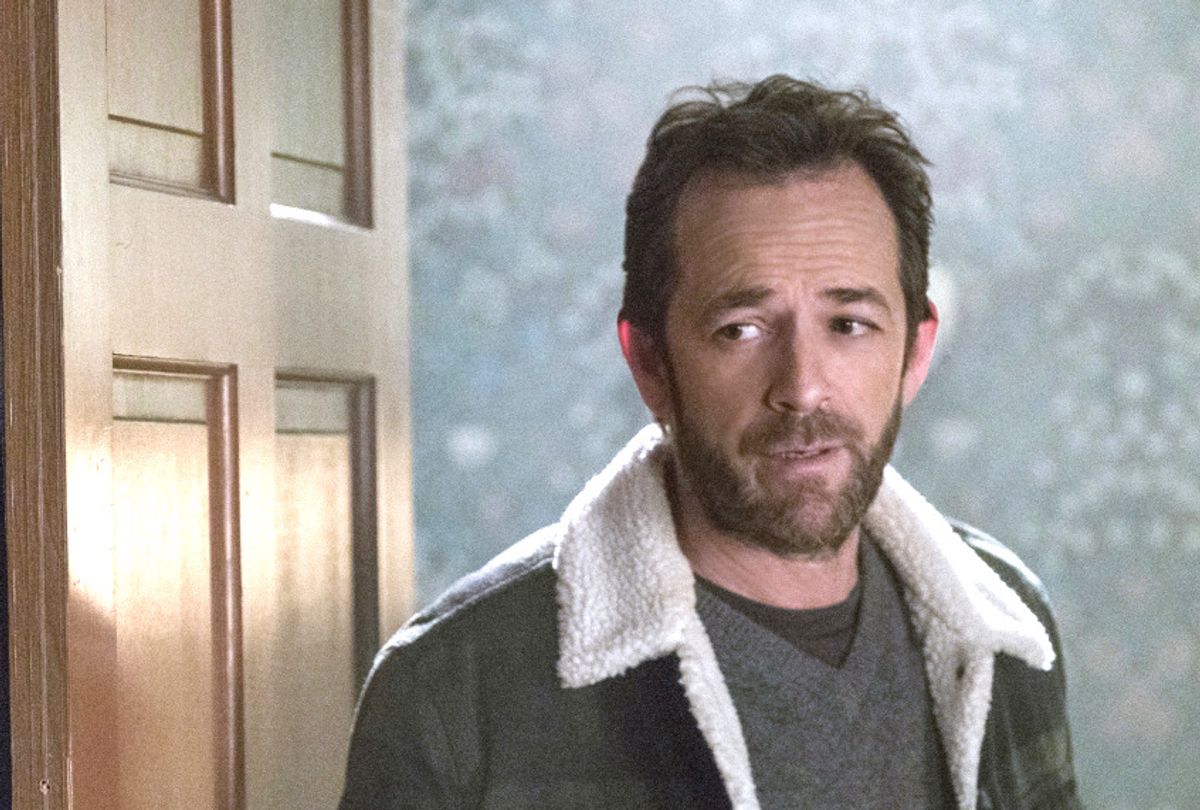 The following contains spoilers from the Season 4 premiere of “Riverdale,” titled “In Memoriam.”

Luke Perry’s sudden death in March shocked fans who had become used to his constant presence in their pop culture landscape. Never achieving the heights of fame that he had as ‘90s sideburns-sporting teen icon Dylan McKay on “Beverly Hills 90210,” Perry nevertheless wormed his way into the psyche of Hollywood playing regular Joes caught in unusual circumstances in projects like the original “Buffy the Vampire Slayer" movie, the post-apocalyptic series “Jeremiah,” and his most recent series, The CW’s “Riverdale.”

Despite the bittersweet timing, it was assumed that a planned revival, titled “BH90210,” would offer the best showcase for a televised homage to Perry. Fox’s late-summer series reunites the original “Beverly Hills 90210” cast to play heightened versions of their real selves who are intent on making a reboot. Perry never signed on; he died before he could work out a deal since he was already under contract with Warner Bros. for “Riverdale.” Despite revisiting the very playground where Perry cut his teeth on TV, “BH90210” did not give him the meaty tribute that was expected. Other than a quiet moment to acknowledge he was missing and a freeze-frame of vintage Dylan McKay at the end of the first episode, his death and legacy were largely passed over.

This absence was keenly felt and created a dissonance with the meta shenanigans happening onscreen. Perhaps the network simply didn’t want to delay production for a more thorough reworking of the story. Or perhaps the revival’s rather cheeky tone didn’t allow for an in-depth farewell to Perry. For a show known for its tonal whiplash, however, “BH90210” could have gotten away with any number of left turns.

This is not necessarily an indictment on “BH90210,” rather an acknowledgement that expectations were high when it came to memorializing Perry. It’s surprising yet gratifying to realize that “Riverdale” succeeded where “BH90210” could not, owing to two significant narrative differences.

The death of a cast member during the production of a TV show is never easy. Besides taking into account the grief of those who worked with the deceased, the production must also deal with the logistics of that actor’s sudden absence, reworking stories and writing out the character. Usually the character is killed off, and deciding those details becomes a gruesome undertaking. Would an onscreen death mimicking the real-life one be too macabre? Would a sensationalized death in a comedy treat the loss too cavalierly? (“Silicon Valley” famously killed off a beloved actor’s character by having him flee a hippo.) And how much would the other characters on the show be allowed to grieve onscreen, if at all, before it becomes too maudlin?

Perhaps understanding all of these pitfalls, “Riverdale” producers took a hiatus to figure out the right way to send Perry off. They also had the luxury of time to do so. The actor had died near the tail end of Season 3 and had already shot many of those final episodes. With its fourth season return Wednesday night, “Riverdale” devotes its entire episode to giving Luke Perry his last stand.

“We briefly thought that maybe something would happen at the end of the season that would signal [his death], but that felt a little cheap. We very quickly made the decision then we weren't going to address that in the current season of ‘Riverdale,’” series creator Roberto Aguirre-Sacasa told reporters at a recent screening of the episode. “We didn't want to sandwich it in between all the other plotlines. It allowed us to absorb what had happened and really think about what kind of story we wanted to tell.”

“Riverdale” is not the most obvious fit for a heartfelt tribute. The CW series that gives Archie Comics a more modern, gothic twist is known for its over-the-top criminal activity, heightened sexuality, and comical reliance on shirtlessness. It’s even staged two musical episodes. But “Riverdale” had an advantage over “BH90210”; Fred Andrews is far more like the real-life Luke Perry than the mutton chopped Dylan McKay had ever been.

Amidst the show’s carnival of lust and larceny, Perry was an oasis of calm ordinariness playing the upstanding Fred Andrews, father of the redheaded Archie (K.J. Apa). In the Season 4 premiere, Archie learns of his father’s sudden death through a phone call. It turns out Fred had been driving back to Riverdale from the nearby Cherry Creek when he stopped to help a stranded motorist by the side of the road and was struck and killed by a passing car.

“We landed on the idea that Fred should have a heroic death, and that that would be impactful for Archie. It felt like that's a way that Fred could have gone,” said Aguirre-Sacas. “Again, we said that this episode really isn't going to launch any huge stories for the season. It was really going to be kind of focused on that and the emotional effects of that passing for everyone.”

The residents of Riverdale reminisce over Fred’s impact on their lives, and Archie eventually decides to fetch his father’s body back himself with the help of his friends. It’s a literal and figurative journey in which Archie grapples with the various stages of grief, meets the fortunate motorist (Shannen Doherty, Perry's "90210" co-star) who owes Fred her life, and comes face-to-face with his father’s killer, a distraught teenage boy who was out joyriding without permission.

“There have been sadly a lot of tribute episodes in television. One of my favorites is the ‘Friday Night Lights’ episode where the football player's father dies. It's called ‘The Son,’” said Aguirre-Sacasa. “We wanted to just tell a very grounded, truthful story. That became the marching orders.”

“Riverdale” doesn’t usually do “grounded.” This is a show that has featured maple syrup as a torture device, a gay conversion nunnery, and a serial killer known as the Black Hood. And yet, “Riverdale” was able to craft a completely mundane yet moving story this time around, aided by how closely Fred Andrews is associated with Perry. Therefore, the characters can wave “We love you, Fred!” signs and wax poetic about the town’s “knight in flannel armor,” but it’s clear that every single sentiment is about Luke Perry. There’s even a callback to a Season 1 detail in which Fred deals with Archie playing his guitar too loudly by soundproofing the garage, a storyline that got Perry’s seal of approval.

“I remember when we did that episode, Luke called me and said, ‘I love that Fred's doing this for Archie. It's something I would've done for my son,’” said Aguirre-Sacasa. “There's so much Baroque storytelling on ‘Riverdale’ that there was such a truth and simplicity to that story. It was nice that that was a thing we could go back to. Same when when Archie bought the jalopy to fix up with his dad. It was a nice confluence of memories.”

“Riverdale” is a show aimed at Millennials and Gen Z, and as such, is unafraid of acknowledging, exploring, and fully wallowing in emotions. Never known for restraint, the show leans into poignant moments like when Archie sits behind the wheel of Fred’s old truck or is too overcome with grief to identify his father’s body. The episode is unhurried and takes its time to feel every heartbreaking beat, and as a result creates space for authenticity of emotion. Furthermore, Shannen Doherty’s presence feels earned and far from gimmicky. There are no winks at her “90210” character Brenda. She is simply a woman who honors a man she admired.

“Over the seasons, Luke and I had talked a lot about trying to get Shannen on the show. The timing never worked out or the part was never quite right. When we were working on the episode, we knew that there would be some characters outside of our cast of characters that would be involved. We thought it would be nice if it was someone he cared for in real life. He cared so deeply about Shannen.”

Most of all, this tribute to Perry works simply because it utilizes the full episode and its characters — especially Archie — to go through the full process of grief. It’s not a singular moment but a full journey that invites the viewer along as well.  There's shock, denial, anger, pain, and eventually, acceptance and affection.

Both Fred Andrews and Luke Perry were equally beloved, and it shows in the plain yet straightforward eulogy that Archie gives:

"My dad was there for every high and every low. He was the greatest man I’ve ever known… It hurts me that I’ll never get to say goodbye, that I won’t get to see him again or talk to him- but his spirit and is memory lives in this town and in everyone he’s met. Fred Andrews will always be a part of Riverdale.”

”Riverdale” airs Wednesdays at 8 p.m. on The CW and can be viewed for free online or on The CW app.