While on Fox News, Eric Trump baselessly blames Obama for Ukraine scandal: "It leads right to him"

What did Trump cite as evidence of guilt? "He's a quiet guy" 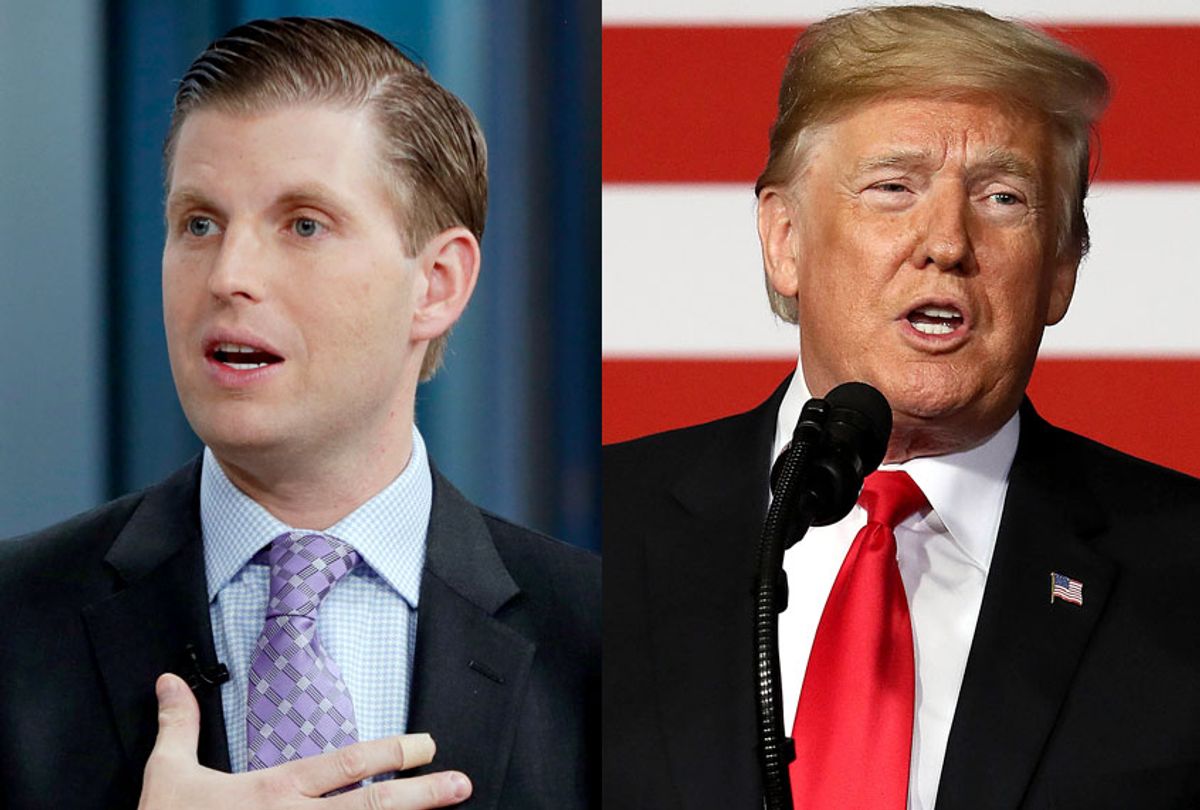 With only quietness to cite as alleged evidence of guilt, Eric Trump sought to cast blame for the Ukraine scandal enveloping his father's administration on former President Barack Obama. The notion moved the baseless conspiracy theories being spun from the White House about former Vice President Joe Biden one step further.

“There is no question it leads right to him,” Trump told Fox News host Sean Hannity as the two speculated why former President Barack Obama has been publicly silent about the Ukraine scandal. “And by the way, it’s not exactly like, you know, he’s a quiet guy. And he has run away from this. He has run away from his vice president. Could you imagine if the roles were reversed, right? And this was Mike Pence, right? I mean they would be killing my father right now.”

“They’re not even asking Obama about this. Obama’s got a complete hall pass for this whole situation. It's ridiculous. The hypocrisy is absolutely ridiculous. There is no question it starts with Obama. There is no question he was involved," Trump continued. "And by the way, even if he wasn't Sean, I would think he would sure as hell want to know if his vice president was committing illegal crimes in Ukraine to line his own pockets."

At the end of July, the president had a phone call with his Ukrainian President Volodomyr Zelensky, during which time he solicited his European counterpart to dig up dirt on Biden. A memo of the call released by the White House suggested that Trump linked providing Ukraine with military aid and equipment with Zelensky's ability to follow through on a “favor.”

At the heat of the call was a conspiracy theory, which baselessly claims that Biden pressured Ukraine's former top prosecutor Viktor Shokin into resigning in order to protect his son from prosecution over his work for a Ukrainian gas company. There is also no evidence that the former vice president, who is now a front-runner in polls to challenge President Trump as a Democrat, improperly used the powers of his office. Further, there is no evidence that his son committed a crime.

Trump’s remarks echoed his Tuesday interview with Fox News host Martha MacCallum, in which he sought to cast the Obama White House, which did not face an impeachment inquiry, as more corrupt than his father's administration.

“I’ve never seen dirtiness like this in my life. I’ve never seen corruption, and they’ve been trying to impeach my father since before he even took office — after he won the election,” Trump claimed.

He then proceeded to claim that both a special counsel investigation into the Trump campaign's alleged collusion with Russia and the sexual misconduct accusations against Supreme Court Justice Brett Kavanaugh were part of an alleged Democratic pattern of attacking his father's presidential agenda. He also predicted that the Democrats’ decision to open an impeachment inquiry into the president would “backfire” against them.

Trump also said asserted his belief that the conspiracy theories about Biden had ended his candidacy.

"This is a clown show, because they know they don't have any people left to run against my father in 2020," he said. "They know they're going to lose.”

Watch Eric Trump's appearance on "Hannity" below via Media Matters: