Conservatives finally have a leader who lives by Ayn Rand's selfish philosophy, and he's an embarrassing clown 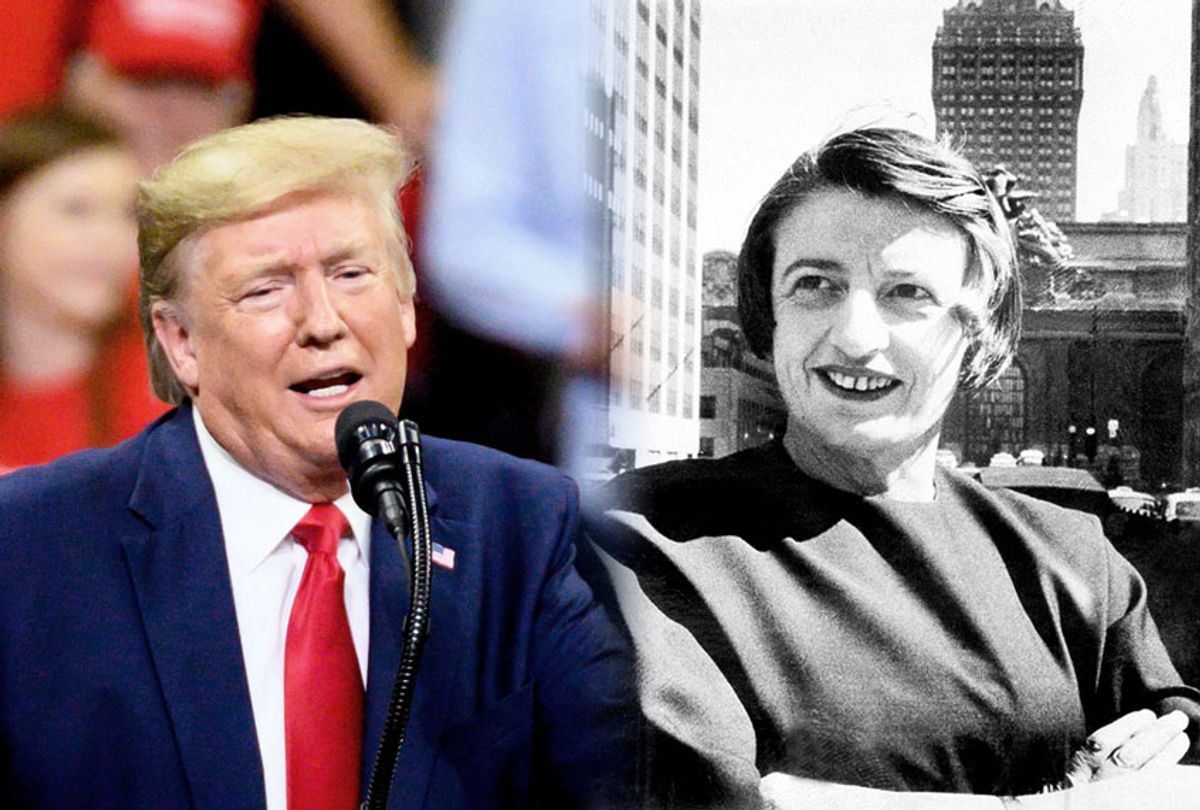 When she was young, author Ayn Rand had a schoolgirl crush on a man who murdered, dismembered and disemboweled 12-year-old Marion Parker, before dumping her body on the street, after promising to return her alive to her parents. That 1927 murder was big news, especially in Los Angeles, where the crime had occurred, and it certainly got the attention of Rand, who had just moved to the city after emigrating from the Soviet Union. She immediately began work on a novel, which she called "Little Street," with a hero based on the murderer, William Hickman.

While Rand's modern-day fans are quick to argue that Rand didn't endorse the murder, it's safe to say she thought highly of Hickman himself and sneered at the people who denounced him, writing that they exhibited "the mob’s murderous desire to revenge its hurt vanity against a man who dared to be alone." This champion of individualism said that Hickman's "degeneracy" showed "how society can wreck an exceptional being." She got to work sketching a protagonist based on Hickman, one with a "wonderful, free, light consciousness" resulting from "the absolute lack of social instinct or herd feeling" and having "no organ for understanding, the necessity, meaning, or importance of other people."

Rand eventually scrapped the idea for "Little Street," but most historians argue that she reworked her idea of the individualistic, contemptuous hero into her later novels, "The Fountainhead" and "Atlas Shrugged." These two books, and Rand's writings on her selfishness-oriented philosophy she deemed "Objectivism," have become the backbone of modern conservatism, a pseudo-intellectual rationalization — beloved by Republicans such as former House Speaker Paul Ryan or Sen. Rand Paul of Kentucky — for a reactionary movement that rose up to reject the feminist and antiracist movements of the 20th century.

In her purple prose, Rand romanticized the capitalist predator as a handsome, virile man whose towering intellect justifies his massive ego and disregard for the common masses. It's why conservatives, angry about the election of Barack Obama, started publicly identifying with John Galt, who is the great-man-among-parasites hero of "Atlas Shrugged."

The question that haunts that novel is, "Who is John Galt?" Now we finally have the answer: Donald Trump.

It turns out a philosophy of radical selfishness is not sexy or heroic, but comes in the form of a half-literate narcissist, cheered on by a bunch of sweatpants-clad fascists as he commits crimes in service of conspiracy theories he hopes will trick the ignorant masses into electing him again.

"In the abstract, Rand would have said that her ideal man upholds reason and capitalism. Based on how this plays out in her books, her ideal man is rich, sexually aggressive, sociopathically unconcerned with what others think of him," author Adam Lee, who spent years blogging his close reading of "Atlas Shrugged," told Salon.

"The real message Rand's works convey is that her protagonists are exempt from the puny standards of law and morality that the common people try to tie them down with," Lee added, noting that the heroes of Rand's books commit rape, mock the people who will die in their shoddily built housing and threaten violence to punish wives who disapprove of their adultery.

Trump's time in politics has been a true test of Rand's theory, which has been embraced by modern Republicans, that this kind of sociopathic selfishness is what compels men to greatness of the sorts that we ordinary people, with our plebeian concerns about moral duty to others and the common good, cannot understand. After all, one thing that is certain about Trump is that, like a true Randian hero, he acts only for himself and to satisfy his own ego, and has no concern for others outside of how they serve his interests.

The results, it's safe to say, are underwhelming. Trump's Randian philosophy of pure self-interest is, of course, why he felt it wise to abandon the traditional point of international diplomacy, which is to advance national interests, in favor of viewing other nations merely as resources to be exploited for his own personal and political gain. That's how he ended up on the phone with Ukrainian President Volodymyr Zelensky, extorting the man to pony up manufactured conspiracy theories about a Democratic presidential candidate in exchange for military aid.

The fallout has, needless to say, been a little less John Galt and a little more Richard Nixon ranting pathetically about his enemies. Trump's blatant lies and grasping excuses for his behavior don't cause the heart to soar so much as the eyes to avert in embarrassment. As the outlines of Trump's conspiracy, with the clownish Rudy Giuliani at its center, come into view, the picture is less that of triumphant individualists sticking it to the small-brained masses than of a bunch of idiots who have vastly overrated their own abilities to pull off pointless crimes.

Nor has Trump's Randian attitude towards his henchmen, in which he shows them no weak-minded loyalty or gratitude for their service, worked out quite as well for him as it's supposed to. Trump's firing national security adviser John Bolton, himself no paragon of social virtue, was the move of a classic Randian hero. Bolton, after all, had the temerity to question the great man's judgment regarding matters like the Ukraine extortion, and had to be dispatched with contempt. But now reports that paint Bolton favorably (in itself a remarkable accomplishment) and make Trump look like a blithering idiot are worming their way into the news, suggesting that Trump's unwillingness to keep the good opinion of his henchmen is coming back around to bite him.

Conservatives like Paul Ryan may wrinkle their noses at Trump's uncouth demeanor and petty behavior, but this is what they signed up for in exalting Ayn Rand as some great philosopher. Despite the high-minded rhetoric, the lived reality of selfishness as a philosophy is less like the fictional figures of Howard Roark and John Galt, and more like the incoherent, small-minded sociopathy of Donald Trump. The great man of the Objectivist imagination has always been a silly fantasy. But it's particularly rich and satisfying that now that the Ayn Rand fanboys finally have a leader who lives out their supposed ideals, the result is the comic, pathetic and catastrophic figure now disgracing the White House.