Giuliani was always a fraud. Just ask the FDNY

As the image of “America’s Mayor” was being rehabbed, 9/11 families saw how his malfeasance killed their loved ones 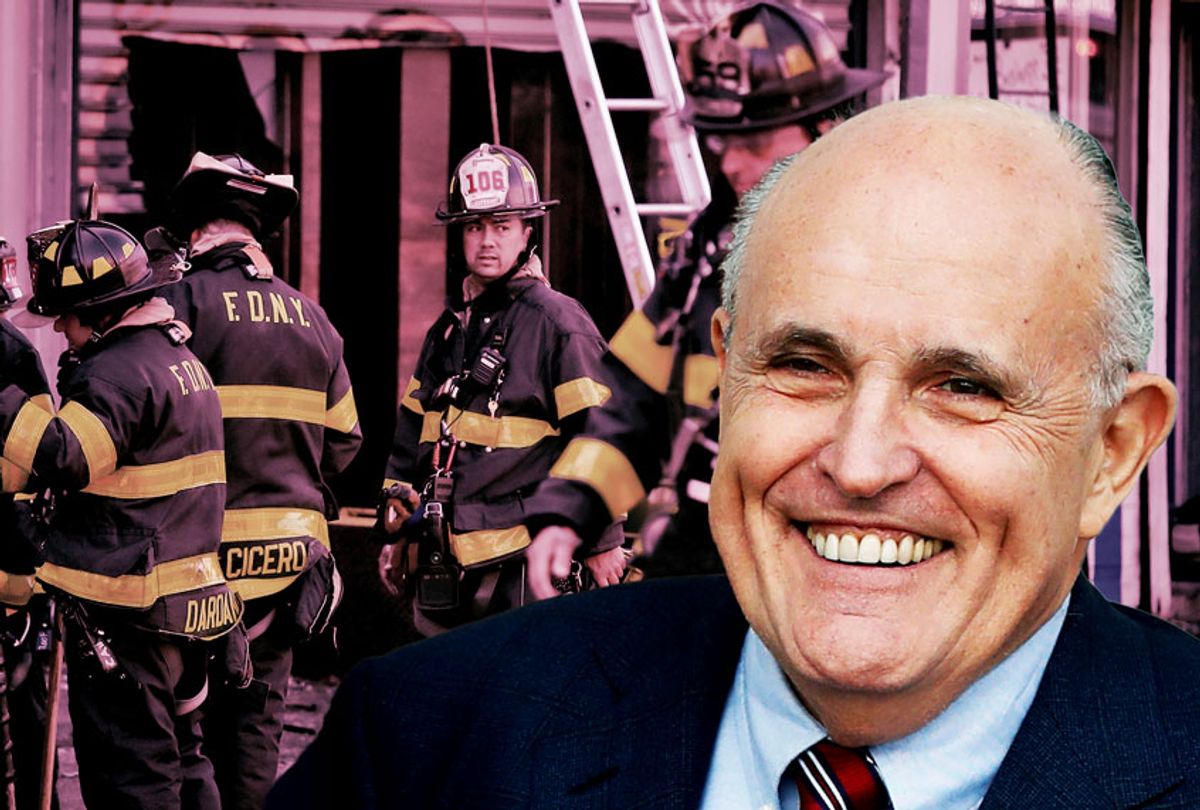 There’s much speculation as to how “America’s Mayor,” the widely admired civic leader who presided over New York City during 9/11, could have been siphoned into Trump’s political undertow — just another sucker duped by an unscrupulous, fabulist administration.

But if the media is to tell the whole story of the rise and demise of America’s Mayor, they need to confess to their role in this grifter’s ascension.

We got a President Trump thanks to a compliant, sensationalist media apparatus that breathed life into his phony self-made billionaire myth, just as we owe them Rudy, who they cast as a post-9/11 American hero.

In politics, narrative is everything.

For it is what is collectively “known” about you before you open your mouth to speak that can help determine if you just hold the stage or get to play on a bigger one.

Successful politicians, with designs on history, perform a kind of pas de deux with reporters, their invisible dance partners who provide them the uplift in public perception that over years shapes the arc of their reputation.

There is a mutual benefit for these waltzing couples, with supportive reporters guaranteed access to the legends they have spun into existence.

Nobody on the planet knows this choreography better than former Mayor Rudy Giuliani, who as the hard-charging U.S. Attorney for the Southern District of New York, made many journalists’ careers by leaking to them tips on where and when suspects were going to be taken into custody.

Through the perp walk this “no finger-prints” manipulation of the media made the army of print and broadcast journalists tools for the prosecution, even as it undermined the defendant’s right to a fair trial and the presumption of innocence.

These sub rosa ties are ones that bind the fourth estate to the prosecution’s narrative throughout the case, unless the pressure of the state and media cabal doesn’t just crush the defendant into submission before there is even a trial.

By the time that the planes crashed into the Twin Towers on Sept. 11, 2001 Giuliani was a master surfer of the wave of public opinion.

In the attacks that played out in lower Manhattan, at the Pentagon, and in Shanksville, Pennsylvania, close to 3,000 people were killed — 343 of them uniformed New York City firemen.

Overnight, the American news media turned Giuliani into a larger than life heroic figure. But the people that were most intimately familiar with the city’s pre-9/11 counter-terrorism preparations knew that it was Giuliani’s failures as Mayor which contributed directly to the horrific body count for the Fire Department of New York (FDNY) that day.

In a detailed after-action report published in 1994 by the FDNY, the inability of firefighters and their officers to communicate over their analog radios that day was flagged as a vital issue that needed to be addressed with some urgency.

In 2008 — when Giuliani was running for president — FDNY Lt. James Wood recounted his experiences during the 1993 World Trade Center bombing in an informational video produced by the International Association of Firefighters (IAFF).

“And I tried to get on the radio to the Chief — this is very important stuff and I couldn’t get out,” he said. “I couldn’t call anybody that could hear me. Nobody responded.”

While the bombing had taken place during Mayor Dinkins tenure as Mayor, Giuliani was sworn in on Jan. 2 1994. As the IAFF recalls it, the critical report about the defective fire radios gathered dust for several years.

It took until March of 2001 for new digital radios to be deployed, but they were withdrawn weeks later after they were deemed responsible for a near life-ending miscue when a firefighter isolated in a basement fire in Queens radioed a “May Day” call for assistance that none of his co-workers heard over their radios. It was only picked up by another fire company miles away.

“The guy caught is caught in a cellar in a private house and he’s calling for help, giving a May Day and the units that are in the immediate area don’t hear him,” said Alexander Santora, a retired FDNY Chief of Safety. “There’s something wrong there with that.”

The new radios were shelved, and the old dysfunctional analogs were put back in service.

The contract for the new radios was a no bid, non-competitive contract that was, as it turned out, just an extension of an existing contract with Motorola, which has a near-monopoly on emergency communications.

According to a report issued by the New York City Comptroller the next month, the Giuliani administration had “willfully” violated “city contracting rules…. endangering firefighters in a reckless bid to buy a new type of hand-held radio that it later had to pull from service,” according to the New York Times.

The Times reported that “the new digital radios were never properly tested before being distributed to firefighters.” As City Comptroller Alan Hevesi documented, “they were purchased through what he described as an improper process that did not allow competing companies to bid for the contract.”

At the time, Michael Wolf, who represented Com-Net Ericsson, a Motorola competitor, told the Times he was stymied in his efforts to even get the city to consider his company’s products.

''If you bypass the bidding regulations, if you don't have multisource vending, if you just have one guy, one source, that gives you advice, this is the sort of situation that you run into,'' he told the newspaper.

Just six months later, FDNY’s bravest faced the doomsday scenario as they sized up the rescue operation in the badly damaged Twin Towers on that clear blue-sky day in September that would take so many of their lives.

They were equipped with the same analog radios that had failed them so badly when the WTC was bombed back in 1993.

As the IAFF video documents and as the 9/11 timeline confirms, at 9:32 am. on Sept. 11, an FDNY Chief ordered all members in the North Tower to the lobby. Even though he repeated the order, not a single company responded.

“On 9/11 firefighters went into the North Tower and started ascending the tower, yet they were being called back and they kept going,” said Richard Salem, an attorney who has been representing several of the firefighters’ families who lost loved ones when the North Tower collapsed. “Not one other uniform[ed] officer from any other department [who had functioning radios], perished in that tower other than the FDNY.”

Despicably, Giuliani tried to cover up his own malfeasance by telling the 9/11 Commission that the North Tower firefighters had ignored the radio orders because of “their willingness, the way I describe it to stand their ground.”

Retired FDNY Deputy Chief Jim Riches, who lost his son Jimmy in the North Tower, will tell this tragic story to anyone who will listen. He and other surviving family members shadowed Giuliani during the 2008 primary and carried on a media campaign that was picked up by outlets like the Guardian.

“These radios did not work in the WTC in 1993 and they did not work in 2001,” he told me during a phone interview. “We got the story out there but when the media christened him ‘America’s Mayor,’ it all went away.”

In a recent New Yorker interview, Giuliani was asked if “saying things for Trump, not always being truthful about it — do you ever worry that this will be your legacy? Does that ever worry you in any way?”

He answered: “Absolutely. I am afraid it will be on my gravestone. ‘Rudy Giuliani: He lied for Trump.’ Somehow, I don’t think that will be it. But, if it is, so what do I care? I’ll be dead.”

And then he went on to muse that he was confident that he could make his case to St. Peter.

I think St. Peter will be the least of his worries.