Robert Reich: Why 2020 won’t be won by centrists

We don’t want to go back to the way it was before Trump. We have to go forward. 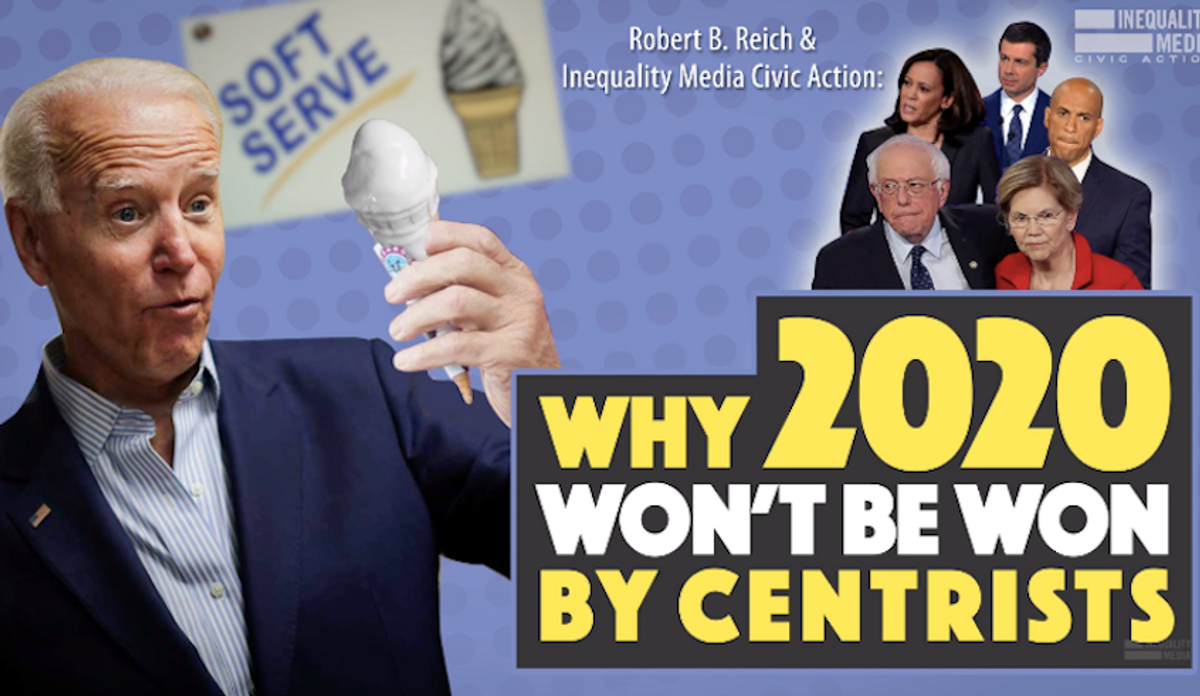 I keep hearing that the Democratic primary is coming down to someone who’s “electable” versus someone who has “ideas.”

This is pure nonsense. Beating Donald Trump requires getting out the vote. And in order to get people to turn out and vote, a presidential candidate has to be inspiring. Which means big ideas, a vision of an America that could become a reality if we all got behind it, a sense of where we need to be heading.

Don’t be fooled. This primary is not a contest between someone who’s electable and someone who has big ideas. Big ideas are essential in order to be electable.

Something else I’m hearing is that the contest is between someone who’s a moderate and a candidate who’s on the left.

Well, that’s rubbish. All the babble about moderate or left assumes we’re back in the old politics where the central question was the size of government.

But today the real contest is between the people and the powerful — the vast majority of Americans versus an oligarchy that’s amassed most of the nation’s wealth and power.

That small group of hugely wealthy and powerful people got a giant $2 trillion tax cut from Trump and his Republican enablers, and they want to pay for it by trashing Medicare, Social Security, Medicaid, and the Affordable Care Act.

The oligarchy would rather we fight among ourselves for the scraps they’ve left behind than see what’s really happening. Divide and conquer: Middle class against poor, white against black, native-born American against immigrant, Christian against Muslim. That way we don’t see that they’ve been looting America.

Trump’s followers don’t see he’s really a tool of the oligarchy, doing their bidding, reorganizing America so they accumulate even more wealth and power. And as long as we fight among ourselves, we don’t join together and reclaim our economy and our democracy.

One final thing I’ve been hearing is that we should go back to the way it was before Trump. That’s baloney.

No, we don’t want to go back to the way it was before Trump. We have to go forward.

So don’t accept false choices about who’s electable versus who has ideas, who’s moderate versus who’s on the left, or whether we need to go back to the way it was before Trump.

In reality, what’s going to beat Trump are new ideas that mobilize America, that let Americans see what the wealthy and powerful who bankroll Trump have done to this nation, and get us looking forward to what America should be rather than backward to an America that was never as good as it could be.