This isn’t the first time the U.S. has abandoned the Kurds 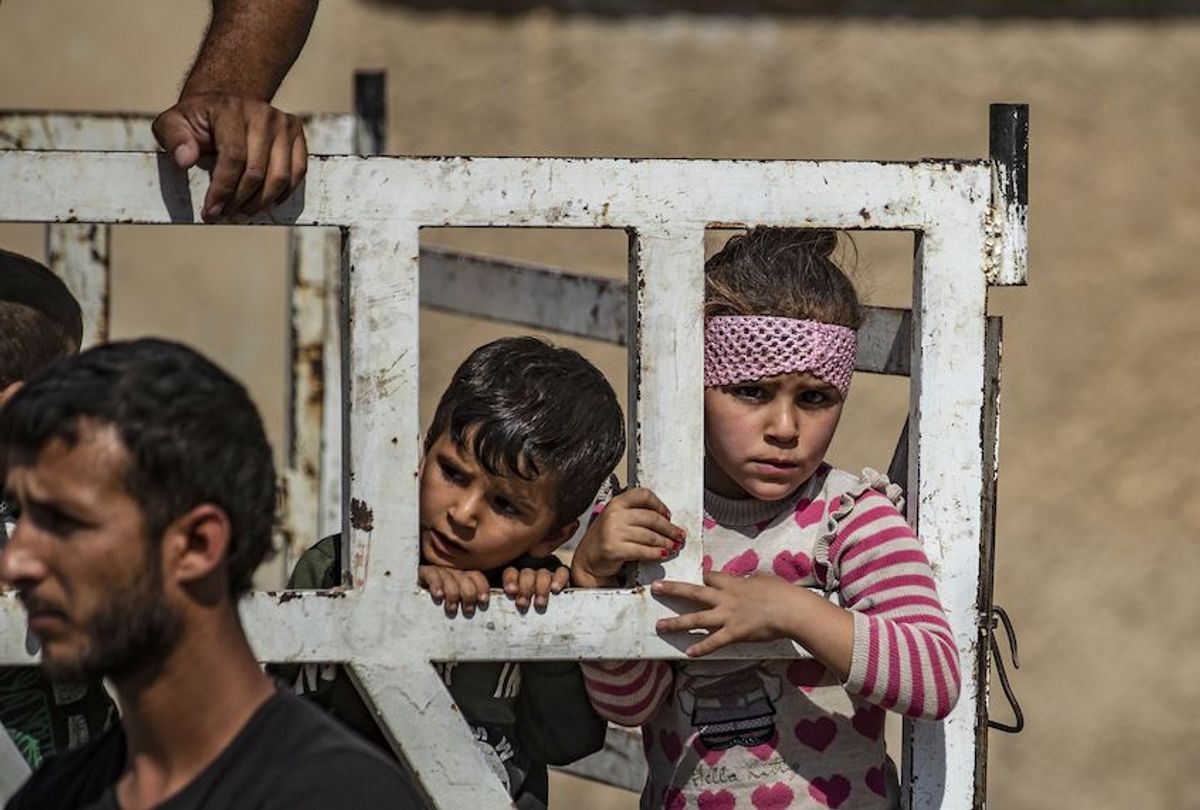 President Trump’s decision to give a green light for a Turkish invasion of Kurdish-populated regions of northern Syria has been faced with swift bipartisan opposition. Apparently, no one in the diplomatic, military or intelligence community — much less the leadership of the self-governing Kurdish enclave the U.S. has armed and supported and is now under siege — was consulted beforehand. U.S. troops should indeed be withdrawn from Syria, but the U.S. soldiers removed from the border area where Turkish forces are now attacking are not being sent home, and instead are simply being redeployed elsewhere in northeastern Syria. Trump’s sudden and apparently impulsive move following a conversation with authoritarian Turkish President Recep Tayyip Erdoğan (one of a number of autocratic leaders with whom Trump has developed a close relationship) is dangerous and irresponsible.

What many of the commentators are ignoring is that this is hardly the first time the United States has goaded Kurds to fight and then abandoned them to slaughter.

The Kurds are a nation of more than 30 million people divided among six countries, primarily in what is now northern Iraq and southeastern Turkey, with smaller numbers in northeastern Syria, northwestern Iran and the Caucasus. They are the world’s largest nation without a state of their own. Their struggle for self-determination has been hampered by the sometimes-bitter rivalry between competing nationalist groups, some of which have been used as pawns by regional powers as well as by the United States.

At the 1919 Versailles Conference, in which the victorious allies of World War I were carving up the remnants of the Ottoman Empire, President Woodrow Wilson unsuccessfully pushed for the establishment of an independent Kurdistan. Since that time, however, U.S. policy toward the Kurds has been far less supportive and often cynically opportunistic.

For example, in the mid-1970s, in conjunction with the dictatorial Shah of Iran, the United States goaded Iraqi Kurds into launching an armed uprising against the then left-leaning Iraqi government with the promise of continued military support. However, the United States abandoned them precipitously as part of an agreement with the Baghdad regime for a territorial compromise favorable to Iran regarding the Shatt al-Arab waterway. Suddenly without supply lines to obtain the necessary equipment to defend themselves, the Iraqi army marched into Kurdish areas and thousands were slaughtered. Then-Secretary of State Henry Kissinger dismissed concerns about the humanitarian consequences of this betrayal by saying, “Covert action should not be confused with missionary work.”

The uprising by Iraqi Kurds against the central government in Baghdad resumed in the 1980s during the Iran-Iraq War, led by guerrillas of the Kurdistan Democratic Party (KDP) and the Patriotic Union of Kurdistan (PUK). Strong Iranian support for the PUK made virtually all Kurds potential traitors in the eyes of Saddam Hussein’s regime, which responded with brutal repression. In the latter part of the decade, in what became known as the Anfal campaign, as many as 4,000 Kurdish villages were destroyed, more than 100,000 Kurdish civilians were killed and more than 1 million Iraqi Kurds — nearly one-quarter of the Iraqi Kurdish population — were displaced.

Despite this, the United States increased its support for Hussein’s regime during this period, providing agricultural subsidies and other economic aid as well as limited military assistance. U.S. officials looked the other way as much of these funds were laundered by purchasing military equipment despite widespread knowledge that it was being deployed as part of Baghdad’s genocidal war against the Kurds. The United States also sent an untold amount of indirect aid — largely through Kuwait and other Arab countries — which enabled Iraq to receive weapons and technology to increase its war-making capacity.

The March 1988 Iraqi attacks on the Kurdish town of Halabja — where Iraq government forces massacred upwards of 5,000 civilians by gassing them with chemical weapons — was downplayed by the Ronald Reagan administration, even to the point of leaking phony intelligence claiming that Iran, then the preferred enemy of the U.S., was actually responsible.

The Halabja tragedy was not an isolated incident, as U.S. officials were well aware at the time. UN reports in 1986 and 1987 documented Iraq’s use of chemical weapons, which were confirmed both by investigations from the CIA and from U.S. embassy staff who visited Iraqi Kurdish refugees in Turkey. However, not only was the United States not particularly concerned about the ongoing repression and the use of chemical weapons, the United States actually was supporting the Iraqi government’s procurement efforts of materials necessary for the development of such an arsenal.

When a 1988 Senate Foreign Relations Committee report brought to light Hussein’s policy of widespread killings of Kurdish civilians in northern Iraq, Democratic Sen. Claiborne Pell introduced the “Prevention of Genocide Act” to put pressure on the Iraqi government. However, the Reagan administration — insisting on being able to continue its military and economic support of Hussein’s regime — successfully moved to have the measure killed.

At the end of the Gulf War in 1991, in response to U.S. calls to rise up against Hussein’s regime, the Kurds launched a major popular rebellion. With the Iraqi army already devastated from six weeks of massive assaults by the United States and allied forces, and then forced to fight a simultaneous Shia-led rebellion in southern Iraq, the Kurds initially made major advances, seizing a series of key cities. These gains were soon reversed by a brutal counterattack by Iraqi government forces, however. Despite earlier promises of support, U.S. forces — which at that time temporarily occupied a large strip of southern Iraq — did nothing to support the post-war rebellions and stood by while thousands of Iraqi Kurds, Shias and others were slaughtered.

Ironically, the invasion of Iraq a dozen years later was justified on the grounds that Saddam Hussein “used chemical weapons against his own people,” despite the cover-ups at the time of the massacres and the United States having provided the regime with the fertilizers and insecticides they knew were being diverted to chemical weapons production.

In the ceasefire agreement following the expulsion of Iraqi occupation forces from Kuwait, the United States made a conscious decision to exclude Iraqi helicopter gunships from the ban on Iraqi military air traffic. These were the very weapons that proved so decisive in crushing the rebellion. U.S. officials have claimed that they were tricked into thinking that Iraqi military helicopters would be used only for post-war humanitarian relief. Others suspect, however, that the Bush administration feared a victory by Iraqi Kurds might encourage the ongoing Kurdish uprising in Turkey, a North Atlantic Treaty Organization (NATO) ally.

The “no-fly zone” unilaterally imposed on northern Iraq ostensibly to protect the Kurds did not actually parallel the demarcation between Arab and Kurdish-populated areas and was used largely as an excuse to continue a low-level bombing campaign of Iraq despite the Baghdad government not breaching the protected airspace. Indeed, during the interwar years, the United States was likely responsible for more Kurdish civilian deaths than was the Iraqi regime.

Similarly, the presence of U.S. forces in northern Syria was never about protecting the Kurds, either, but for fighting ISIS and for countering, as Trump administration officials have acknowledged, Iranian and Russian forces elsewhere in Syria at the invitation of the Damascus regime.

Where the United States bears the greatest responsibility in terms of Kurdish sufferings, however, has been at the hands of the Turkish regime.

The Kurds of Turkey number well over 15 million, the largest of any country. Yet there have been periods in recent history when simply speaking the Kurdish language or celebrating Kurdish festivals has been severely repressed. In addition to being denied basic cultural and political rights, Kurdish civilians for years suffered from the counterinsurgency campaign by Turkish armed forces ostensibly targeting the Kurdistan Workers Party (PKK), a Marxist-led guerrilla group fighting for greater autonomy. The Turkish regime has called the PKK a terrorist organization as an excuse to crush even nonviolent expressions of Kurdish nationalism. During the height of the repression during the 1990s, the United States — while condemning the PKK — was largely silent regarding the Turkish government’s repression.

The Clinton administration justified its 11-week bombing campaign of Yugoslavia in 1999 on the grounds that atrocities such as the Serbian repression of the Kosovar Albanians must not take place “on NATO’s doorstep.” Ironically, similar ethnic-based repression on an even greater scale had been already taking place for a number of years within a NATO country without U.S. objections.

During the 1980s and 1990s, the United States supplied Turkey with $15 billion worth of armaments as the Turkish military carried out widespread attacks against civilian populations in the largest use of U.S. weapons by non-U.S. forces since Israel’s 1982 invasion of Lebanon. Most of this took place during President Clinton’s first term. Over 3,000 Kurdish villages were destroyed and over 2 million Kurds became refugees in an operation where more than three-quarters of the weapons were of U.S. origin. Human Rights Watch, which also criticized the PKK rebels for serious human rights violations, documented how the U.S.-supplied Turkish army was “responsible for the majority of forced evacuations and destruction of villages.” The 15-year war cost over 40,000 lives.

In addition, despite justifying air-strikes against Iraq in the name of enforcing the Kurdish “safe haven” and the no-fly zone in the northern part of that country, the Clinton administration defended periodic incursions into the safe haven by thousands of Turkish troops as well as airstrikes by the Turkish military inside Iraqi territory which resulted in the deaths of large numbers of PKK guerrillas and Iraqi Kurdish civilians. These attacks were widely condemned by the international community but defended by the U.S. government, with President Clinton standing out as the only international leader to openly support the Turkish regime’s military interventions in Iraq. According to Clinton State Department spokesman Nicholas Burns, “Turkey’s an ally. And we have no reason to question the need for an incursion across the border.”

Given the history of repression by the Turkish armed forces against Kurdish civilians, Trump’s support for further Turkish intervention in Syria could have utterly tragic results. While Trump’s policies certainly deserve to be challenged, they should not be seen as a major departure from decades of cynical and treacherous U.S. policy toward the Kurdish people.

Note: Portions of this piece were drawn from a 2007 policy analysis the author did for the Institute for Policy Studies.