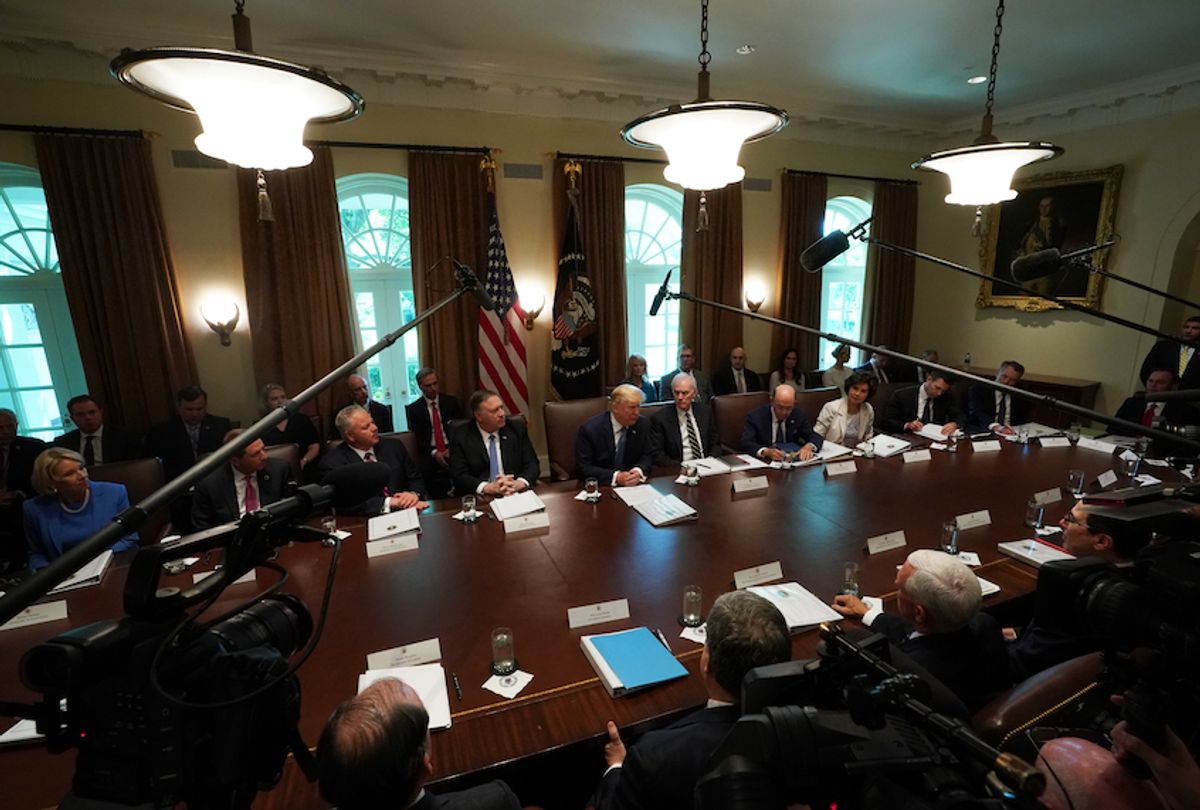 I’m more than amused by Donald Trump’s newfound insistence that he is in search of Corruption to unearth.

Indeed, in pursuit of Corruption, he is willing to walk all over the U.S. Constitution in order to tag political foe Joe Biden and his son as the source of a Shady Deal, with him risking impeachment by Congress in order to do so.

This comes as repeated new investigative efforts find no evidence of specific corruption in Biden joining calls across Western Europe for the removal of a Ukrainian top prosecutor who was seen as bending all decisions in favor of Russian oligarchs doing business in Ukraine — at the same time that his son had joined the board of a Ukrainian energy company.

But let’s take the president at his, um, ever-changing word. Maybe he is interested in unearthing Corruption. I certainly am.  After all who wouldn’t want to rein in “dishonest or fraudulent conduct by those in power, typically involving bribery” or other financial shenanigans.

Maybe he should look closer to home.

How many of his own Cabinet members used to represent the very companies they now are supposed to oversee?

Andrew Wheeler, head of the Environmental Protection Agency, used to represent gas and oil interests, and, surprise, has ruled several times already in favor of gas and oil interests in deciding on which EPA regulations should be tossed out. So too had been his predecessor, Scott Pruitt, the former Oklahoma attorney general, who actually had sued the EPA repeatedly for, well, enforcing environmental rules. Think any of this sounds like the makings of Corruption?

How about Wilbur Ross, the Commerce Secretary who lied to Congress and was censured by Congress about the reasons for trying to add a question about citizenship to the Census forms?  In August 2018, Forbes reported that Ross’s business partners and workers accused Ross of illicitly siphoning or stealing a total of $120 million. In February 2019, Ross’ financial disclosure was rejected by the United States Office of Government Ethics after he reported that he sold bank stock in conflict with other disclosures he made.

In June 2018, an investigation by Forbes found that Ross, while United States Secretary of Commerce, owned “stakes in companies co-owned by the Chinese government, a shipping firm tied to Vladimir Putin’s inner circle, a Cypriot bank reportedly caught up in the Russia investigation and a huge player in an industry Ross is now investigating and that Ross had failed to divest his financial holdings, instead putting them in a trust for his family members, contradicting Ross’s written statement in November 2017 that he had divested all his financial holdings.  Ross may have broken the law in doing so. These holdings posed a conflict of interest for Ross, as the Trump administration was in a position to affect the value of the holdings. Sound like Corruption concern to you?

Betsy DeVos, the Education Secretary, has won her Trump administration spurs by fostering parochial and private schools at the cost of taking money from public schools and trying to make rules easier for campus rapists and sexual assaulters. DeVos and her family have seen their investments skyrocket since Trump started enacting business policies that have helped corporate leaders.

Steve Mnuchin, who has lied and twisted regularly in public to protect Trump’s flank,  himself has acknowledged that he had failed to disclose to the Senate Finance Committee nearly $100 million in assets, as well as his role as a director of an investment fund incorporated in the Cayman Islands, a notorious tax shelter, during his confirmation. He also denied that OneWest Bank — an institution that specialized in foreclosures in the aftermath of the financial crisis — had participated in the practice of “robo-signing” foreclosure documents without doing the necessary diligence.

Elaine Chao, the transportation secretary and wife of Senate Majority Leader Mitch McConnell, has come under scrutiny for family ties to Chinese business dealings in the shipping industry. Just this week, Chao was the subject of news articles noting that she appears to favor businesses from Kentucky, where McConnell is seeking reelection.

This call against Corruption is coming from Team Trump, where working for the president while also working for foreign governments is seen as okay (Michael Flynn), outright bribery in buying off sex partners is allowed (Michael Cohen), and hiding payments made in violation of campaign finance is within bounds (National Enquirer publisher).

Then there is the Trump family itself, with all the ethical concerns raised about continuing to route international figures to his own hotels and resorts, renting his properties to the Air Force, and generally allowing his family members to do business with China and other countries in just the manner that he finds objectionable in Biden.  Jared Kushner’s family alone has been embroiled directly in money-making schemes in China and the Middle East of the exact variety that Trump sees in the Bidens.

The list goes on, depending on how widely you want to define the exact Corruption.

For sure, such a broadside against Corruption might start with a look at Trump’s tax returns, which he has fought mightily in court and now has won a temporary reprieve from a New York judge’s order to release them.

By all means, please go after Corruption, Mr. President.