Donald Trump is the weakest incumbent president in decades: If Democrats don't screw this up

Of course Democrats can't get cocky. But the whole Trump enterprise is coming unglued as a massive delusion 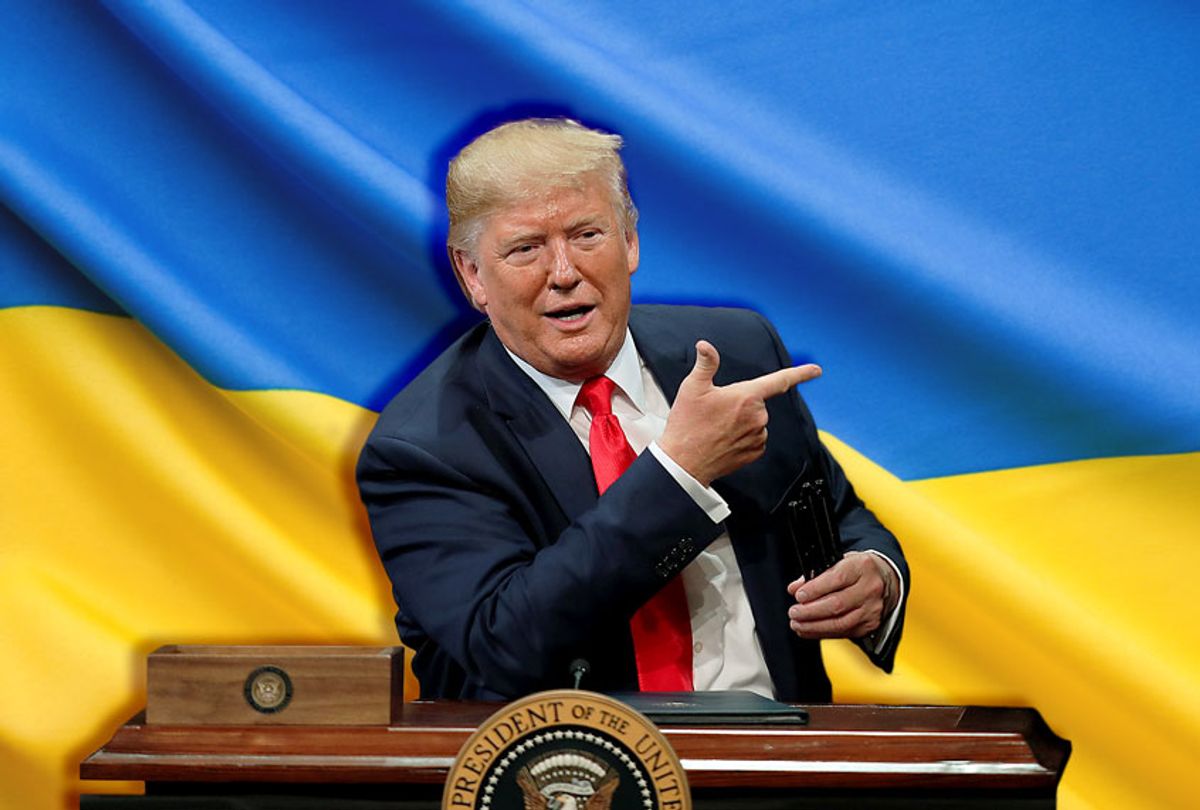 These are tough times for independent journalism. If you value Salon's original reporting and commentary, please take a moment to support our writers directly. Right here, right now, you can make a direct contribution to Bob Cesca to help make his work possible. All donations go straight to our writers.

Donald Trump might be the weakest incumbent in decades. Don’t get happy — anything can happen next year. But his vast impotency, in terms of his character and, especially, his political future, seem obvious to me. Yet he’s too often regarded as a tough guy, a poseur Mafia don who’s osmotically absorbed too many gangster movies. Trump perpetually mistakes the appearance of toughness for actual fortitude, and every sobbing tweet betrays his brittle ego.

More specifically, the president’s conspiracy to exploit federal military aid, your taxpayer dollars, in exchange for foreign help with his re-election is all the proof we need of Trump’s pathetic weakness.

The details of these crimes, including and especially the selling-out of American sovereignty, all serve to highlight the reality that Trump doesn’t think he can win without cheating. On some level, he believes he requires outside help with his election, and he’ll do anything to get it. Nothing underscores a weak incumbent quite like needing Ukraine’s newly elected TV-show president to provide Trump with a booster seat at the grownup’s table.

Trump’s Ukrainegate conspiracy and the pathetic insecurity it reveals fit perfectly with everything we’ve observed of Trump for decades, especially the last several years. What Trump sees as positive PR comes off as the same sort of gibberish many of us observed during grade school recess, when the class blowhard would describe how he’s the best at something because his “Mommy said so.” With Trump, replace “Mommy” with either Rasmussen or Mark Levin, and it all makes sense.

Whether it’s Trump's constant and desperate self-aggrandizement or his nonstop whining about how “unfair” the world is to him, I’m baffled as to why so many Red Hats regard this illegitimate, hissy-fit-hurling faker as a nine-foot-tall action hero infiltrating a church to acrobatically mow down his enemies. My hunch is that if Trump ever actually fired a loaded weapon, the recoil would shake the pinkish-hued never-worked-a-day-in-his-life skin off his soft, baby-bottom hands.

By the way, while Trump accused the Kurdish people of not "helping" during the Normandy invasion, Trump and his oh-so-painful bone spurs were no use in Vietnam. Given his obvious cowardice, maybe his deferments were for the better. Nevertheless, he’s a textbook bully. He’s Biff Tannen, constantly sliding into piles of manure and blaming everyone but himself, masking his intense insecurities behind a daily shitshow of inchoate screeching. It all suggests the findings of that viral study about how monkeys with the smallest testicles possess the loudest voices.

The Red Hats like to define Trump’s behavior as “owning the libs,” but I fail to see how Trump’s constant bellyaching accomplishes anything beyond embarrassing himself. He’s a 73-year-old man, a grandfather, who throws hourly tantrums that would make a sackful of weasels look calm and centered.

Here’s another perfect example of Trump’s gelatinously enfeebled ego. You’ve likely heard the president belching into the nearest microphone something about how Rep. Adam Schiff, chairman of the House Intelligence Committee, treasonously lied about what Trump said during the July 25 phone call with Ukrainian President Volodymyr Zelensky.

On Monday, the president tweeted: “Democrat’s game was foiled when we caught Schiff fraudulently making up my Ukraine conversation, when I released the exact conversation Transcript, and when Ukrainian President and the Foreign Minister said there was NO PRESSURE, very normal talk! A total Impeachment Scam!” (Presented here exactly as tweeted.)

On previous occasions, Trump has framed Schiff’s alleged fraud as treasonous to the point of being worthy of impeachment.

I get what he’s trying to do here. He’s undermining Schiff’s integrity, because Schiff is ostensibly playing the Robert Mueller role in this impeachment investigation. But once you work your way through the awkwardly written bluster, the argument is flimsier than Trump’s poll numbers.

Firstly, with this line of attack, Trump keeps diverting attention back to the call read-out itself, the non-transcript transcript of his Zelensky call. Sure, many Red Hats won’t bother to read the document, those who do will see the quid pro quo in plain sight, confirming the conspiracy to withhold military aid in order to coerce election help from the struggling Ukraine government. It’s another case of Trump pointing at a door while insisting there’s nothing behind it: Nope, nothing — seriously, nothing’s behind that door so don’t bother to look. Even Trump supporters who wish to bask in the alleged perfection of the conversation will see those 10 politically fatal words ending in “do us a favor though” leaping off the page and landing in the middle of an article of impeachment

Second, and most important, Schiff absolutely did not misquote Trump because he didn’t quote Trump at all. In the real world, we define what Schiff said at the outset of testimony by acting Director of National Intelligence Joseph Maguire as paraphrasing. Paraphrasing, to be clear, is defined as “expressing the meaning of (the writer or speaker or something written or spoken) using different words, especially to achieve greater clarity.” Surely, Trump knows what paraphrasing is, given his weirdo performance art last week fictitiously portraying sex between former FBI employees Lisa Page and Peter Strzok.

As for whether it’s illegal or even treasonous to paraphrase someone, Trump likely hasn’t thumbed through a copy of the Constitution, given that the founding document is longer than one page of bullet points. So he probably doesn’t realize that paraphrasing most definitely is not a treasonous act, nor, for that matter, is it possible to impeach a member of Congress. Oh, right: He’s embarrassing himself to own the libs! Yes, I forgot. Anyway, whatever-that-was with Page and Strzok didn’t happen the way Trump described it, unless he was there, and we should assume he wasn’t. So, was his paraphrasing of Page and Strzok impeachable? Jeez, I wish it were, but it’s not. It was gross and obnoxious, but not a crime.

However, if we assume for a moment that it’s illegal, and even impeachable, to put words in someone’s mouth, then it was an illegal and impeachable act when, during a press gaggle in the Oval Office, Trump claimed Nancy Pelosi had said, "We can't impeach him on this conversation. This is a great conversation!"

Pelosi never said that, obviously. She also didn’t drop to the floor to pitch a conniption fit when Trump made it up. Why? Because she’s an adult with priorities and actual work to do.

Nevertheless, before Schiff presented his in-other-words interpretation of the intent of Trump’s arms-for-help offer, the chairman clearly stated, “Shorn of its rambling character and in not so many words, this is the essence of what the president communicates.” In other words, this is the concept Trump was attempting to relate, as Schiff (and most other normals) interpreted it. Nothing in Schiff’s remarks inaccurately framed the salient portions of the conversation. Just to be sure no one missed Schiff’s point, he concluded, “This is in sum and character what the president was trying to communicate with the president of Ukraine.”

I realize vocab isn’t the strong suit of the Forgotten White Man, the “poorly educated” voters Trump loves so much that he routinely dupes them with his agitprop and lies, but words still matter, even hard words like “shorn,” “essence” and “character.” But any rational reading of Schiff’s remarks indicate obvious paraphrasing, or as Schiff put it, “parody.” He didn’t say, “And I quote.” He didn’t say, “Here’s exactly what the president said.” Schiff emphasized that he was relating “the sum and character” of Trump’s offer, the “character ... in not so many words” of what Trump attempted to do with that call.

I can’t believe we have to explain the idea behind paraphrasing, yet thanks to the desperation of the president and his fanboys, here we are.

Nitpicking aside, the flimsy nature of Trump’s argument once again reveals his extreme vulnerability, given how the threat of impeachment as well as the 2020 election are simultaneously careening toward his face at accelerating velocity. Indeed, while he confronts these two juggernaut threats to his presidency, one of his top-shelf public arguments is, yes, a hilariously literal reading of a clear and incontrovertible paraphrasing by Adam Schiff, who, not for nothing, is one of the most even-keeled members of the Democratic caucus, perhaps of the entire 116th Congress. Our president is this close to excusing his obstruction of Congress by insisting that when Schiff and Pelosi subpoenaed his records, they didn’t say the magic word.

Trump is an alpha dog in the same way his hair is thick and luxurious, which is to say it’s a myth, one that Trump constantly has to fabricate during “executive time” in order to sustain it. The more we allow the myth to flourish, the more real it becomes. Fortunately, reality is stronger and considerably more powerful, and he’s about to crash directly into it. Just like Biff Tannen. Again.