Greece is the 10th biggest exporter of strawberries in the world. 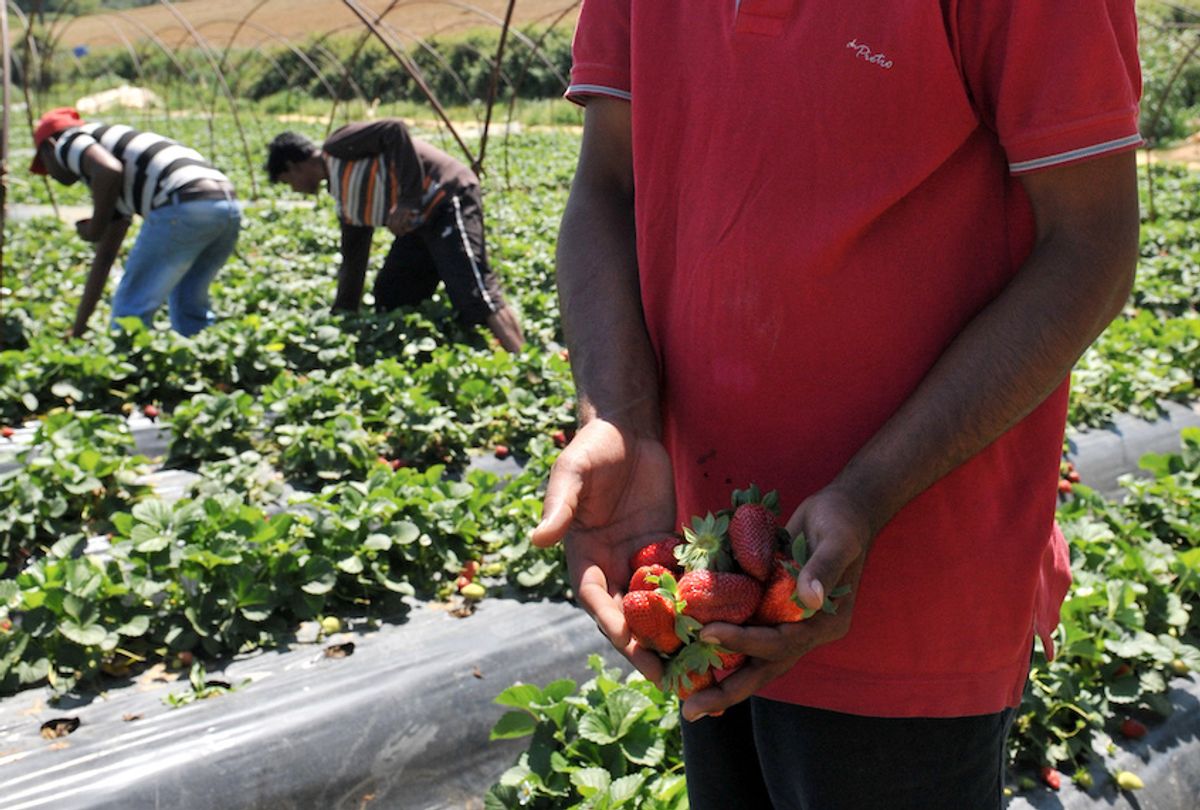 Each growing season, from October to May, as many as 12,000 undocumented Bangladeshi migrant men work in the agrarian labor market in Greece.

Although they consider Greece a transit stop to other European countries, most end up staying for years. The migrant farm workers say the farmers reap rich profits but are so far unwilling to provide decent housing for them. Nor can the seasonal workers find local accommodation.

The workers are forced to rent unused farmland and build highly inflammable makeshift shacks called barangas. Baranga is a Bangladeshi colloquial term derived from a Greek word, paranga, which translates as “a shack.” Workers construct the barangas out of salvaged plastic sheets, cardboard and reeds.

Greece is the 10th biggest exporter of strawberries in the world. Strawberry farming is labor-intensive. Once picked, the fruit perishes quickly. This puts a huge demand on the fast-paced yet careful harvest of unblemished strawberries. Migrant workers form the backbone of this farming, and it’s work that locals appear unwilling to do.

I arrived in the village of Nea Manolada, Greece this past summer to research Bangladeshi migrant men working on strawberry farms. Since 2017, I have studied temporary labor migration of South Asian men from Bangladesh, India and Pakistan in Greece.

A group of Bangladeshi strawberry pickers, living there for eight years, took me on an oral history tour. They pointed to refrigerated trucks used to transport strawberries to wider markets and newly constructed, multi-level farmer’s homes. A young migrant in his early 20s said: “Look how they live in comfort — all due to our hard work. What do we get in return? Discarded plastic sheets as our roof.”

A group of 25 Bangladeshi farm workers in Nea Manolada released this statement:

“Sweating our blood in the field, we earn huge profits for farmers who treat us worse than animals. We want people to learn how we live a rough life in barangas.”

Labor force surveys reveal that more than 50 per cent of agricultural workers in Greece are migrants. Factoring in undocumented migrants, that figure comes closer to 90 per cent. Strawberry farmers fully exploit migrant willingness to do the dirty, dangerous and demeaning jobs (known as 3D jobs). They give them long work hours, high targeted outputs and depressed wages.

The majority of Nea Manolada’s 700-strong population is engaged in strawberry cultivation, either as independent producers or as sharecroppers. Almost 95 per cent of strawberries grown in Greece come from this region. Since the mid-1970s, this highly profitable cash crop has replaced the traditional potato crop.

The conditions of work can be described as forced or unfree labor. Withholding of wages is a common practice here and tie the workers to the farmers. In 2013, protests by Bangladeshi workers against delayed wages led to Greek farmers shooting at them. The workers won a landmark human rights case, and Greece was forced to pay more than US$648,000 to 42 of them.

Workers lose everything in frequent fires

When this sum is calculated for housing 12,000 workers for seven months, it reveals that staggering profits are made off the backs of this flexible labor force that is paid a less than minimum wage of US$32 per day.

Agreements are informal, with no receipts. There have even been instances where the failure to pay timely rent has resulted in harassment and intimidation from local police.

Barangas offer no running water, electricity or sanitation facilities. These structures are human tragedies waiting to happen. The danger of the inflammable construction material is heightened with cooking done inside in crude partitioned kitchens, with propane gas cylinders, and lighting provided by candles. Because barangas are located on wastelands with no proper road access, firefighters have difficulty accessing them.

In June 2018, a massive fire broke out in a migrant settlement in Nea Manolada. It spread from one baranga to engulf all before help could arrive. More than 340 Bangladeshi workers lost everything they had, including identification papers, passports, work permits, proof of stay and saved wages. In 2019, seven fires, fuelled by strong winds, charred entire sets of barangas in the same region in a matter of minutes.

So far, no one has died. But the men worry about what might happen if a fire breaks out at night, when everyone is sleeping. Blazes in similar migrant housing have resulted in fatalities.

Besides the dangers of fire, barangas present other challenges. They don’t insulate against the elements. In the summer, the temperature inside reaches 50C and in winter, it is below freezing. Thin mattresses and blankets lie on dirt-packed floors covered with a patchwork of cardboard.

Because there’s no electricity, there are no fans or heaters. The men are also unable to charge cell phones, a vital link to their families. As well, dead phones can mean a loss of wages. Each evening, workers wait for the supervisors’ call, asking them to report to work the next day. The only place to charge phones is at ethnic grocery stores or cafes with long queues to do so.

Untreated piped ground water can be used for bathing and washing of clothes but drinking water must be paid for, eating into the meagre monthly wage. Outdoor toilets consist of holes dug in the ground covered with wood slats and plastic sheets wrapped around four poles to provide privacy. “Showers” are open-air platforms. Waste water gathers in pools around the barangas, breeding grounds for mosquitoes and flies.

The workers are deterred from demanding better living conditions because they are undocumented. That means Greek farmers are able to exploit them without fear of reprisals, especially because of the disciplinary practices of border control, and the regime of deportability based on migrant “illegality.”

The ever-present threat of potential deportation scares undocumented migrant workers who then discipline themselves as efficient but invisible workers. Local authorities, aware of their plight, have turned a blind eye to improving migrant housing, leaving the men with little recourse.

As a laborer in his mid-30s who has been working on the farms for seven years said: “Everyone exploits our desperation to earn wages while profiting from our labor.”