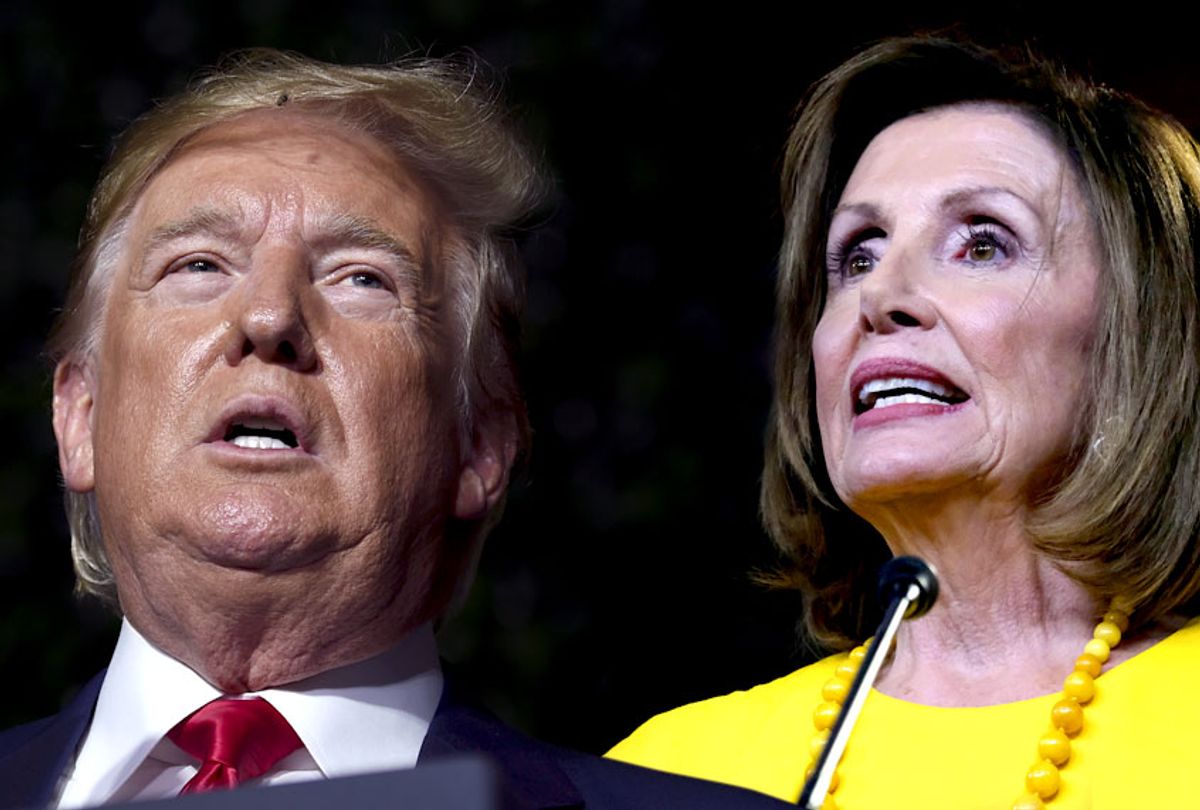 Democratic leaders in Congress walked out of a White House meeting on Wednesday with President Donald Trump after he had a "meltdown," House Speaker Nancy Pelosi, D-Calif., said.

"What we witnessed on the part of the president was a meltdown. Sad to say," Pelosi told reporters at the White House.

The meeting centered on the president's decision earlier this month to withdraw U.S. troops from northern Syria, which cleared a path for Turkey to attack Kurdish forces, who have been a key U.S. ally in fighting ISIS in the region. In the wake of Trump's decision to withdraw U.S. troops from the area, Turkish President Recep Tayyip Erdoğan ordered his troops to move deeper into the territory to fight Kurdish militias he viewed as a threat.

Many criticized the decision because they believed it opened the door to the re-emergence of ISIS, though others defended it as the most effective way to avoid U.S. service members being caught in a crossfire between Turkey and the Kurds.

"By the way, everybody hates ISIS," Trump said earlier Wednesday during a joint news conference with Italian President Sergio Mattarella at the White House. "Some were released just for effect to make it look like, 'Oh gee, we gotta get back in there,'" he added, mocking reports that noted ISIS prisoners had escaped from captivity.

He said he was not surprised by Erdoğan's actions, and insisted the fight is over land that has "nothing to do with us."  He also pushed back on criticism and denied giving Turkey the "green light" to go into Syria.

The White House called the meeting with lawmakers to discuss the situation in Turkey.

Both Republicans and Democrats have condemned Trump's decision to withdraw U.S. troops from northern Syria. Ahead of the meeting, the House of Representatives overwhelmingly approved a resolution condemning the withdrawal, with nearly two-thirds of the chamber's Republicans supporting the resolution.

The non-binding resolution states the House's opposition to the withdrawal and calls on Turkey "to immediately cease unilateral military action in Northeast Syria." It urges the U.S. "to continue supporting Syrian Kurdish communities through humanitarian support, including to those displaced or otherwise affected by ongoing violence in Syria."

Moreover, the resolution asks Trump to "present a clear and specific plan for the enduring defeat of ISIS" and for the U.S. "to work to ensure that the Turkish military acts with restraint and respects existing agreements relating to Syria." Both the House and the Senate are readying sanction packages against Turkey in the coming days that would be harsher than those imposed by the White House earlier this week.

"I think that vote, the size of the vote — more than 2 to 1 of the Republicans voted to oppose what the president did — it probably got to the president, because he was shaken up about it," Pelosi said Wednesday. "That's why we couldn't continue the meeting, because he was just not relating to the reality of it."

"He was insulting, particularly to the speaker. She kept her cool completely but he called her a third-rate politician," Schumer said. "This was not a dialogue, it was sort of a diatribe. A nasty diatribe, not focused on the facts."

House Majority Leader Steny Hoyer, D-Md., echoed those remarks. He said Democrats "were offended deeply by his (the president's) treatment of the Speaker of the House of Representatives." He noted the meeting "deteriorated" and said that there were "very offensive accusations being made by the President of the United States."

"I have served with six Presidents. I have been in many, many, many meetings like this. Never have I seen a president treat so disrespectfully a co-equal branch of the government of the United States," he added.

White House press secretary Stephanie Grisham denied the Democrats' description of the meeting, saying, "the president was measured, factual and decisive, while Speaker Pelosi's decision to walk out was baffling, but not surprising. She had no intention of listening or contributing to an important meeting on national security issues."

"While Democratic leadership chose to storm out and get in front of the cameras to whine, everyone else in the meeting chose to stay in the room and work on behalf of this country," she added.

Trump later tweeted a series of photos from the meeting, including one he described, "Nervous Nancy's unhinged meltdown."

Earlier on Wednesday, a letter Trump sent last week to Erdoğan was made public. In the letter, Trump urged the Turkish leader not to be a "tough guy" or a "fool" as his troops launched their attack on northern Syria.

Trump then referred to economic sanctions his administration used on the country to push for the release of an American pastor who had been detained in Turkey, calling it "a little sample" of what the future could hold for the dictator.

"I have worked hard to solve some of your problems. Don't let the world down. You can make a great deal," Trump wrote, asserting that the commander of the Kurdish forces is "willing to negotiate with you."

The White House confirmed the letter's authenticity to multiple reporters.