Hunter Biden admitted the obvious in his ABC interview. Would the Trumps, Rand Paul or Ronna McDaniel do that? 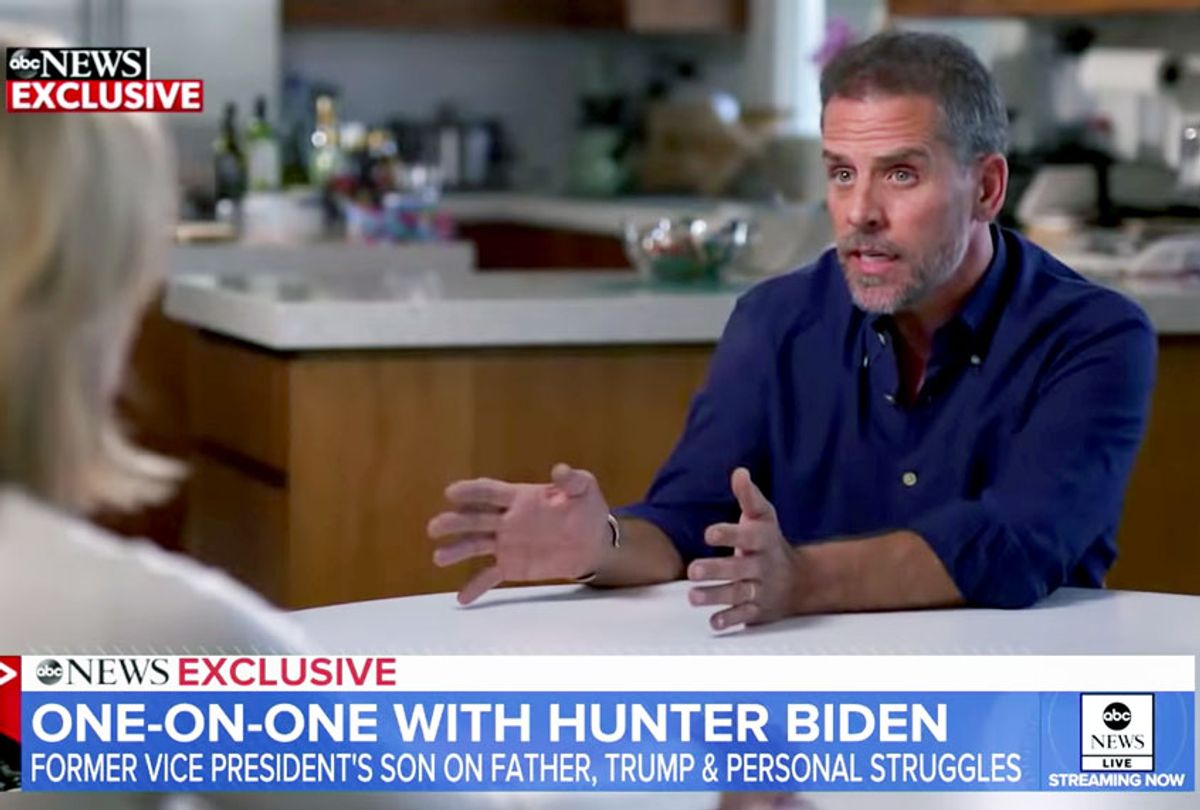 Former Vice President Joe Biden's son Hunter appeared on ABC's "Good Morning America" on Tuesday, and when asked if he thought foreign companies and investment banks would have hired him if his name wasn't Biden he said, "Probably not." He is correct. The younger Biden had little to no experience in the businesses for which he was paid big salaries. He was hired because he is the son of a powerful person, clearly in hopes that they would have some influence with the father and impress their customers with the fact that they were so close to someone with influence.

That reeks of class privilege and it is incredibly common in American business and politics. I don't think I have ever worked anywhere in my life where cronyism, nepotism and influence-peddling weren't present in some form or another. Hiring some ne'er-do-well relative is one of the ways rich and powerful people scratch each other's backs — and, not incidentally, ensure that the quasi-aristocracy of the one percent is perpetuated. If anything, what's uncommon is for some scion of the powerful to openly admit he only got the job was because of his name. Usually, they fatuously insist their "success" is due to their own unique brilliance and talent.

It was interesting to see the reactions of some of the famous scions of right-wing politicians weigh in on Hunter Biden's appearance. For instance, Sen. Rand Paul, R-Ky., who is the the son of Ron Paul, a longtime GOP congressman from Texas and two-time presidential candidate, told MSNBC that Hunter Biden should be officially investigated. When anchor Stephanie Ruhle pointed out that there are numerous offspring of powerful people working in the administration, Paul, the great libertarian, excused this nepotism because the children weren't getting rich. When Ruhle pressed him about the Trump family, Paul suddenly reversed course saying, “If we want to go down the road of the politics of self-destruction of everybody, criminalize all politicians on both sides of the aisle and go after their family, we can do that." He then suggested it was "holier than thou" to even ask the question, since both sides do it.

Hunter Biden will be sure to call him as a character witness if Trump's Department of Justice follows through on an investigation, as has been rumored.

The late Sen. John McCain's daughter, Meghan McCain of "The View," thought Hunter Biden didn't come off too well either, and said he was foolish to have admitted that his last name had landed him his well-paid employment. No word on what her husband Ben Domenech, founder of the conservative The Federalist and son of the Trump administration's undersecretary of the interior, Douglas Domenech, had to say about it.

One of the most aggressive critics of the Biden family nepotism was Republican National Committee chairwoman Ronna McDaniel, who tweeted: “Hunter Biden got $50K a month from a Ukrainian energy company, despite having ZERO experience in energy. His justification? That he was also on the board of Amtrak–more obvious nepotism. If that’s not the swamp, I don’t know what is!”

You may recall that McDaniel changed her name when she took this big job at the RNC after Trump's inauguration. Before that she was better known as Ronna Romney McDaniel. She is the niece of Sen. Mitt Romney of Utah, the party's 2012 presidential nominee, and the granddaughter of the late Michigan Gov. George Romney, who himself ran for president. When it comes to nepotism, she knows whereof she speaks.

Naturally,  it was the Trump spawn that really hit the ball out of the park. Big brother Donald Trump Jr. couldn't resist tweeting about Hunter Biden's interview:

Apparently, Don Jr. believes that like his father (also the scion of a wealthy man) he is a very stable genius who got where he is purely by dint of his enormous talent.

Eric Trump was on Fox News with Laura Ingraham recently and also had some strong opinions on the matter:

He even wrote a whiny op-ed for The Hill in which he declared that Hunter Biden was being let off easy:

If the situation were reversed, I would have been front page news in every newspaper, online publication, and cable news outlet for the rest of my life. Reporters would be camping outside of my door, my family would have been picked apart, my name would have been smeared in the news every single week, and my father arguably would not even be president of the United States today

As former Bush administration official David Frum said on MSNBC's "AM Joy" last weekend, ”When you see poor Eric and poor Don Jr., you realize there are bivalves with more self-awareness than the Trump children."

It's been nearly impossible to get the House to take up the president's criminality and abuse of power, so it's unlikely that anyone will ever officially investigate the influence-peddling, bribery, nepotism and overall corruption of the Trump family during this presidency. But it is unprecedented.

Ivanka Trump and her husband Jared Kushner take no salaries, mainly because it was the only way they could get around the nepotism rules for White House staff. But they are both still raking in tens of millions of dollars every year from their businesses, many of which are clear conflicts of interest with the work they supposedly do at the White House. Kushner, in particular, has huge financial conflicts in countries he deals with in his official capacity. Ivanka shuttered the fashion business but continues to get trademarks from China for some reason and works on issues that impact the Trump Organization — from which, of course, she still profits.

The Trump boys, who were to run the business while Dad and Ivanka did the politics, were supposed to eschew any "new deals." Of course, they've done plenty. They've sold a lot of real estate to people with good reason to curry favor with their father. They've been feted and pampered by rich sheiks and government leaders and shady businessmen all over the world, many of whom are open about their desire to gain access and influence with the president — who is also benefiting financially from all of this.

Here's one from just last month:

Only a first family that would openly engage in this level of nepotism, cronyism, influence-peddling and corruption would have the chutzpah to rail against Hunter Biden and whine that he's being treated with kid gloves. In other words, only the Trumps would do that.