Facebook says one's ads cannot spread falsehoods, unless you're among a specific subset of politicians. Wait, what? 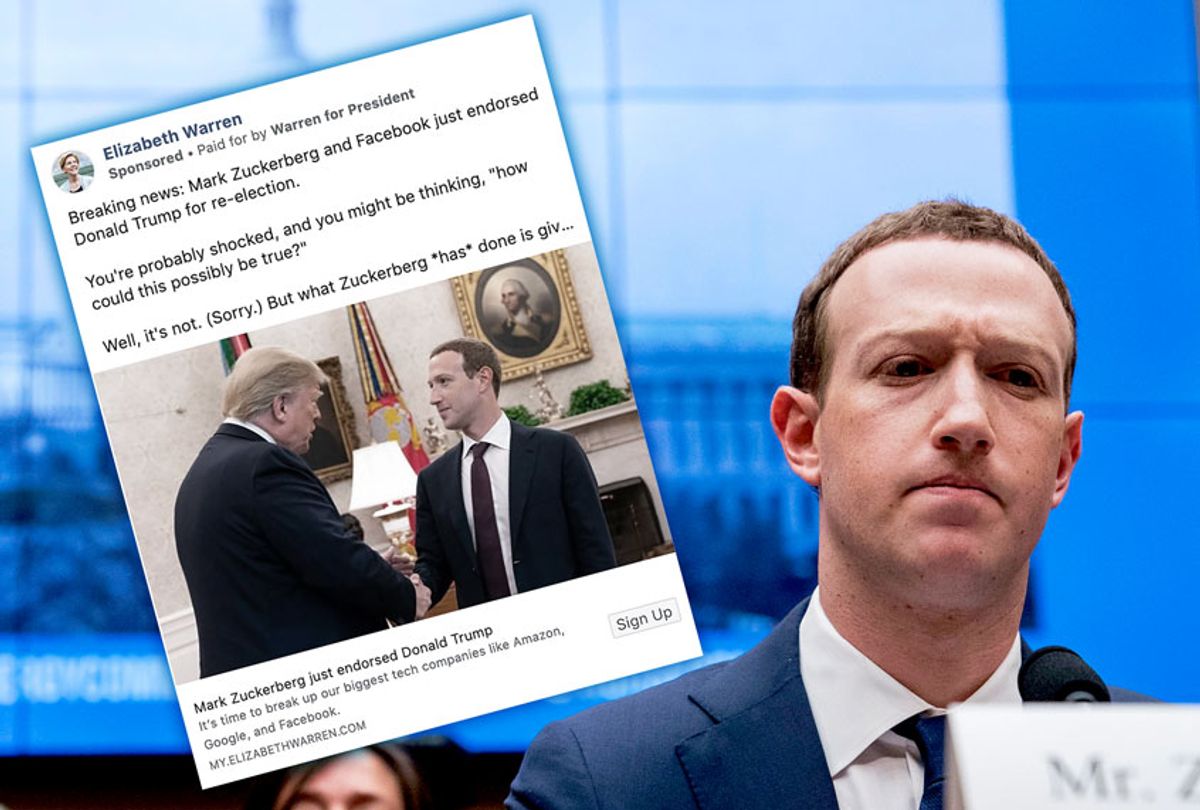 The hashtag #DeleteFacebook is trending again, and for more than merely one scandal. Besides being in the news for a small legal fine that the social media giant was slapped with after its falsified video data undermined numerous news media outlets, the company's recently-clarified advertising policy reveal a strange double-standard that gives prominent politicians carte blanche to spread falsehoods on the platform.

"You're probably shocked, and you might be thinking, 'how could this possibly be true?' Well, it's not. (Sorry.) But what Zuckerberg *has* done is given Donald Trump free rein to lie on his platform--and then to pay Facebook gobs of money to push out their lies to American voters."

The ad was an effective way to raise awareness about Facebook's refusal to verify political ads on its platform. Warren's ad was allowed because of a Facebook policy that allows politicians to lie in political advertising. The policy came to light in a post by Nick Clegg, Facebook's Vice President of Global Affairs and Communications, who explained in a speech last month that the decision is "grounded in Facebook's fundamental belief in free expression and respect for the democratic process."

"We rely on third-party fact-checkers to help reduce the spread of false news and other types of viral misinformation, like memes or manipulated photos and videos," Clegg said. "We don't believe, however, that it's an appropriate role for us to referee political debates and prevent a politician's speech from reaching its audience and being subject to public debate and scrutiny."

We have had this policy on the books for over a year now, posted publicly on our site under our eligibility guidelines. This means that we will not send organic content or ads from politicians to our third-party fact-checking partners for review. However, when a politician shares previously debunked content including links, videos and photos, we plan to demote that content, display related information from fact-checkers, and reject its inclusion in advertisements. You can find more about the third-party fact-checking program and content eligibility here.

Yet this policy that is meant to determine which political ads stay and which ones are deleted appears to be on precarious philosophical footing. As BuzzFeed News reported yesterday, the company is haphazardly enforcing other advertising policies, which have resulted in paid content from at least five U.S. presidential candidates to be removed. A Facebook spokesperson told BuzzFeed News none of the rejected ads were rejected because they were deemed false by their fact-checkers; rather, they were removed for violating one or more of Facebook's other advertising policies, like using fake buttons in ads or profanity.

While prevaricating isn't exactly a new thing for political campaigns, social media allows false claims to go viral, unimpeded, in a matter of seconds. It also provides the capability for those ads to reach millions of people around the world instantaneously. This puts Facebook in a precarious position, and seems to contradict its previous vows to stop misinformation from spreading on its platform.

Indeed, Facebook haphazardly enforces its own misinformation policies because it has taken a haphazard stance on misinformation. For example, regarding the anti-vaccination "movement", which poses a vast risk to public health, Facebook says it won't tolerate such misinformation. "If a group or Page admin posts this vaccine misinformation, we will exclude the entire group or Page from recommendations, reduce these groups and Pages' distribution in News Feed and Search, and reject ads with this misinformation," Monika Bickert, vice president of global policy management, said in a statement.

Meanwhile, Zuckerberg is preparing to address the company's latest criticisms in a speech tomorrow. Per his own Facebook post, he has been preparing a speech about his "views on voice and free expression."

"It's the most comprehensive take I've written about my views, why I believe voice is important, how giving people voice and bringing people together go hand in hand, how we might address the challenges that more voice and the internet introduce, and the major threats to free expression around the world," he said. "I spent a lot of time working on this, and it's an unfiltered take on how I think about these questions."