Sorry, Ellen and Mayor Pete, but no: We're not ready to forgive Trump voters

The "Ellen" debate question sparks anger — and for good reason. Why should we forgive people who supported fascism? 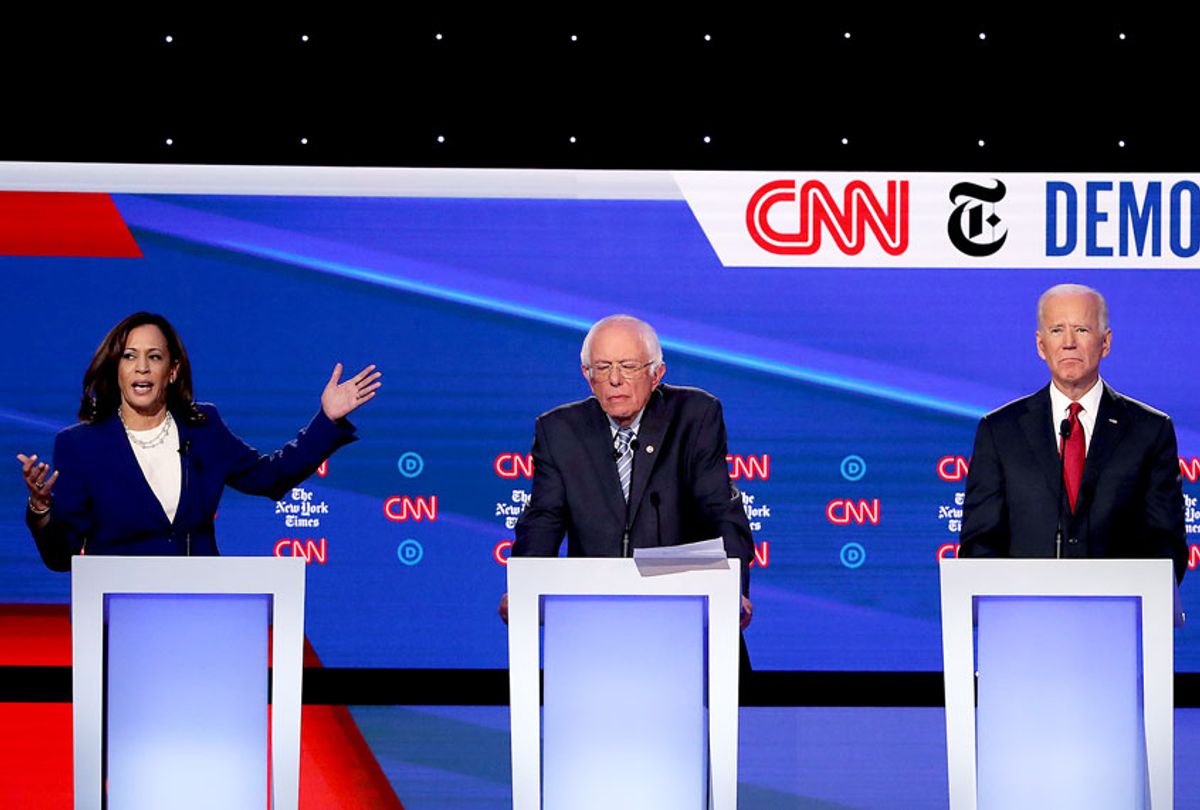 The last question of Tuesday night's Democratic debate appears to have really teed people off.  After three hours of a debate that had, as former HUD Secretary Julián Castro noted on Twitter, "no questions tonight about climate, housing or immigration," Anderson Cooper decided to cap things off with a truly saccharine dose of pablum.

"Last week, Ellen DeGeneres was criticized after she and former President George W. Bush were seen laughing together at a football game," Cooper said. Completely accepting DeGeneres' apparent argument that being nice means befriending people who should have faced a war crimes tribunal, Cooper continued: "We’d like you to tell us about a friendship that you’ve had that would surprise us, and what impacts it’s had on you and your beliefs."

The candidates largely played along, though Castro and Sen. Kamala Harris tweeted about their annoyance afterwards. But Castro alluded to the reasons why the question was bogus in his answer, arguing that the controversy that erupted over DeGeneres hanging out with Bush was about whether "to hold people to account, especially public servants who have a record" of doing real damage to real people.

Cooper's question, which took for granted the idea that we should make friends with bad people in the name of "unity," was a dumb one. Castro's reframing, however, points toward why the "Ellen controversy" has captured public attention so much so that CNN thought it wise to include a debate question about it. Accountability versus forgiveness is, in fact, an issue weighing on the minds of a lot of Americans these days, and largely not because of George W. Bush.

In a lot of ways, this debate over an irrelevant celebrity friendship is a stand-in for the question that's really on a lot of people's minds: What do we do with all the Donald Trump supporters once Trump is finally gone? Do we pretend it never happened for the sake of public comity, as pretty much happened when Bush left office? Or should progressives impose social consequences, declining friendships and putting a chill on family relationships, in order to send the message that supporting Trump was not OK and will not be shrugged off as a harmless lark?

Castro limited his argument for accountability to public figures like Bush. But for understandable reasons, these questions about forgiveness versus accountability extend, for so many of us, to the Trump voters we know in our own lives. Forgive and forget was the approach largely adopted by progressives towards Bush voters, even though those people had spent eight years defending an administration that conducted a destructive and pointless war along with a secret torture campaign, and then capped it off by letting an American city drown and ushering in a financial crisis we still haven't recovered from.

Instead of being grateful for the largess of progressives letting bygones be bygones, conservatives reacted like spoiled children at the election of Barack Obama, even as he worked, however imperfectly, to save the country from the bad decisions made under Republican rule.

The Tea Party tantrums, the repeated government shutdown threats, and then, ultimately, the election of Trump: That's how conservative voters thanked Democrats for saving their skins. No wonder liberals are starting to wonder if forgive-and-forget was a bad move.

Certainly, the #MeToo movement is a major sign that American progressives are finally done with the bygones method of dealing with past injustices. Men who were outed as sexual harassers and abusers moved with dizzying speed to push "plotting his comeback" storylines, confident that swift forgiveness was their due, even if they weren't actually sorry for what they did. But that, it turned out, was the old world, when feminists and progressives could be guilted with calls for "unity" and "healing" into letting bad people escape consequences. This is the post-Trump world, and progressives are sick of having to forgive people who haven't done anything to earn forgiveness — and have no intention of doing better in the future.

There are, of course, still Democrats who are eager to pretend all this stuff never happened and who are ready to start hanging out with Trump voters, pointedly forgetting that they supported putting starving children in cages, unleashing a genocide against Kurds, drastically escalating wealth inequality, and a president who uses the Oval Office powers to cheat at elections and line his own pockets. South Bend, Indiana, Mayor Pete Buttigieg, for instance, put a big bet down during Tuesday's debate that there's a big constituency for "unity".

"I’m running to be a president who will turn the page and unify a dangerously polarized country," Buttigieg said during the debate, after asking viewers to imagine the day after Trump is finally out of office.

This kind of unity rhetoric sounds nice and healing, but, as we found out during the Obama years, in practice means "unity" just means liberal magnanimity. Conservatives, of course, will continue to act like brats who cannot believe Democrats still have the right to vote in this country. "Unity" just allows Republican voters to nurse their grievances, while ignoring the fact that they're the ones at fault for all the problems created by the Bush and Trump presidencies.

Lashing out at DeGeneres for buddying up with George W. Bush is about the growing contempt from ordinary voters for the elite classes who treating politics, and even war, like a sport, instead of something that has real impact on real people's lives. But it's also about something deeper, a question that's staring many progressives in the face: Do we forgive conservatives for the damage they've done, in the interest of keeping the peace and being the bigger people here? Or should we turn to social shunning and outright contempt?

It's a terrible thing that things have gotten to this point, but it's important to understand that all other options have been exhausted. Progessives tried reasoning with conservatives. We tried calls for unity and healing. We elected Obama, whose entire platform was based on healing divides and reaching across the aisle to unify our country. The reward for these efforts was that conservatives spat in our face and elected an abusive, racist, misogynist criminal.

Unity was a nice idea in theory. It failed. Now it's time for something else.