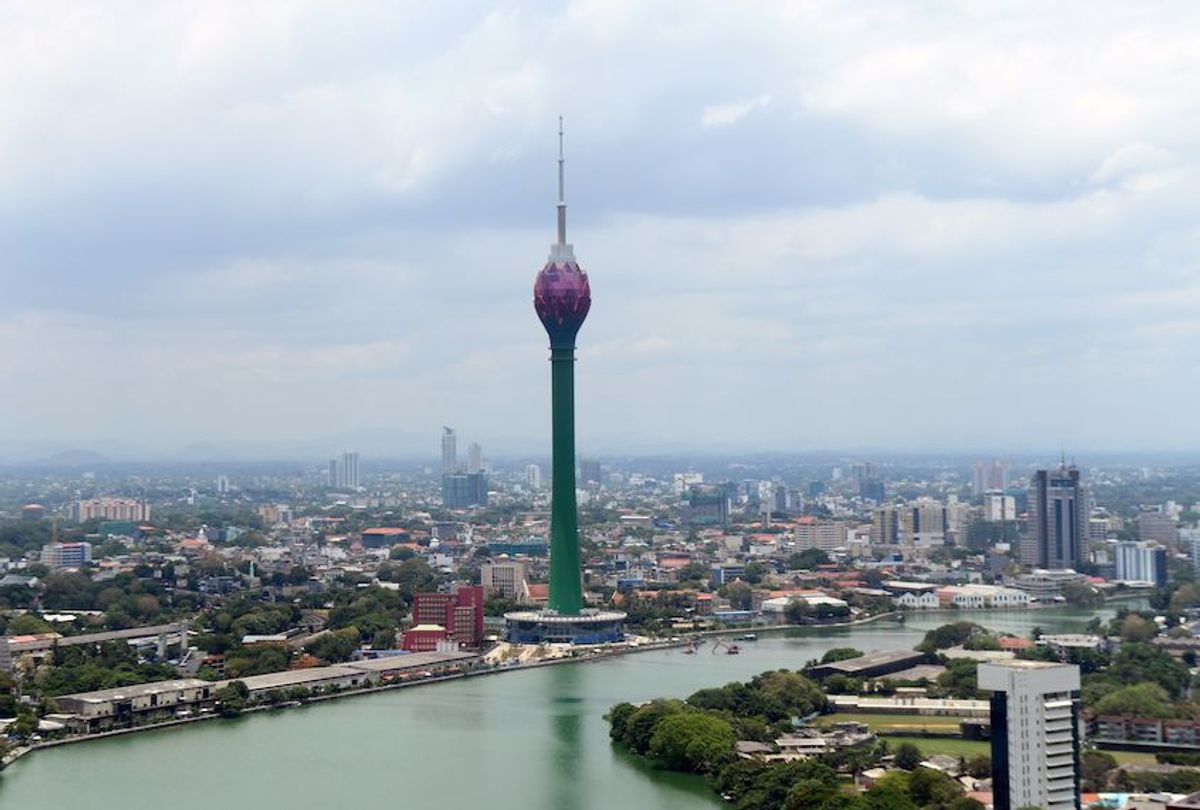 This photo taken on April 17, 2019 shows the China-funded Lotus Tower in central Colombo. - Real estate projects around the city have been linked to China's Belt and Road Initiative (BRI), a sweeping trillion-dollar infrastructure program across Asia, Africa and Europe that is viewed with deep suspicion by countries like India and the United States and has divided opinion within the EU. (Lakruwan Wanniarachchi/AFP/Getty Images)
--

Inspired by the ancient Silk Road, China is investing in a massive set of international development projects that are raising concerns about how the country is expanding its power around the world.

Initially announced in 2013 by Chinese President Xi Jinping, the so-called “Belt and Road Initiative” has China planning to invest in economic development and transportation in more than 130 countries and 30 international organizations. Projects range across Asia, but also include places in Africa, the Caribbean, Europe and South America.

With a projected cost of more than US$1 trillion, it may be the most ambitious infrastructure project undertaken in human history. The country hopes it will all be completed by 2049, the 100th anniversary of the founding of the People’s Republic of China. My research in international economics with particular reference to China shows that Beijing has both economic and political plans for how these investments will pay off.

China also has an ambitious goal to dominate global production of electric cars — as well as other high-tech equipment — for which it needs reliable supplies of cobalt, a key ingredient in high-capacity batteries. More than half of the world’s supply comes from the Democratic Republic of Congo. China’s investment there has helped secure much of that crucial element for Chinese production.

Analysts and scholars have criticized these and other moves for economic dominance, arguing that taking the country’s money is like drinking from a “poisoned chalice” — a brief refreshment leading to certain death.

Sri Lanka, for instance, defaulted on debts it owed China for development at the port of Hambantota — and was forced to give the Chinese government control of the port for 99 years.

Chinese investments in the Pakistani port of Gwadar have set Pakistan up to owe China more than $10 billion.

As these countries get more closely tied to the Chinese economy, they also shift into the range of its political efforts, sparking several concerns about the country’s motivations. Navy analysts have called China’s growing control of ports in Asia — including Hambantota, Sri Lanka; and Gwadar, Pakistan — an effort to assemble a “string of pearls” with which it can dominate much of Asia.

Malaysian Prime Minister Mahathir Mohamad warned that China may be turning into a new colonial power.

The U.S. sees Chinese expansion as a security concern and has urged India to serve as a strong example that a Western-style democracy and society can succeed in Asia. In addition, the U.S. has proposed working with Australia, India and Japan on a massive development effort to rival China’s power.

The European Union is also unsure about China’s political intentions. Some of its members have joined individually, but others have expressed concerns that Chinese plans often overlook environmental and social sustainability — and that its bidding process is not sufficiently open to the public. There is some general European concern that China is seeking to divide Europe politically.

Recent reports suggest that Chinese investment in the Belt and Road Initiative — and international interest in Chinese funding — is slowing. In part that may be because, predictions and analysis aside, nobody knows for certain what China is aiming for — except to boost its own side in its rivalry with the U.S.