We love Paul Rudd, even in his unremarkable new Netflix show “Living With Yourself” 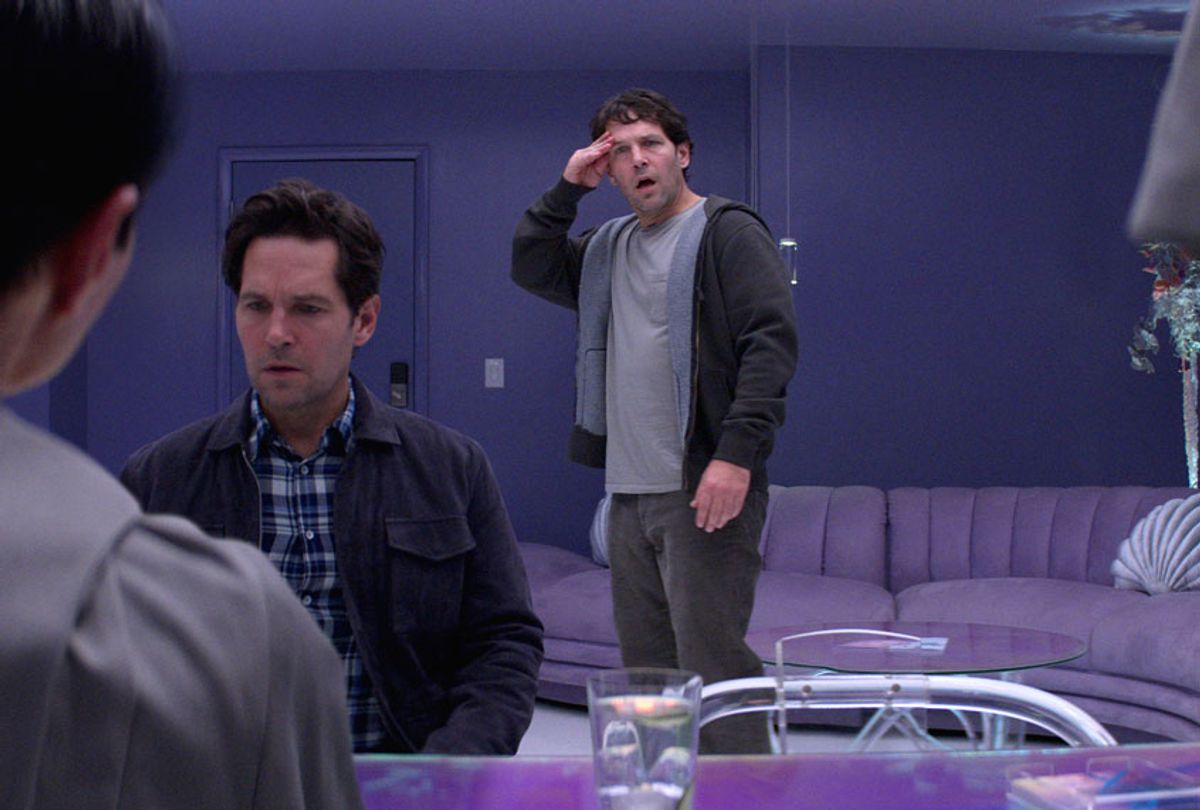 Paul Rudd and Paul Rudd in "Living With Yourself" (Netflix)
--

On Thursday afternoon, for a brief time, Paul Rudd's name shot to the top of Twitter's "Trending" ladder  for no immediately discernible reason.

These days seeing a celebrity's name surge to the top of mentions so quickly tends to make me clench up a little because it usually because it means the person has died, or been in an accident — or has been unmasked as a horrible, abusive wretch, contradicting everything we thought about him. Sometimes that's even worse than those other tragedies.

And yes, those "he" and "him" pronouns are used intentionally. It is almost always a man outed this way, and for concrete reasons. Fifty percent of the time it's a man whose fame is at least in part based in some camouflage of sweetness and charity, or a strain of amiable oddity that was previously believed to be harmless, delightful, and even attractive.

Not so with Paul Rudd, a man who randomly pops up in 280-characters-or-less conversations having to do with is niceness and how much we like him, especially when placed in an apples-to-much-rosier-apples comparison to, say, a racist toe.

On the days that famous humans fall short of our basic expectations of decency it helps to know that there is Paul Rudd. He's the kind of movie star who is good-looking, but in a husband or adorable dad material kind of way, which isn't surprising, since he's been married to the same person since 2003,  a detail that, gosh darn it, only makes us love him more.

Men like Rudd, I'd imagine, because he projects the aura of a supportive friend you can have beers with, who will answer your toughest questions honestly and gently tell you when you're being a jerk.

Women, I find, are drawn to his handsomeness and the fact that it's a brand of handsome lacking in arrogance or a predatory edge. Rudd seems like the kind of the guy who will get you home from the bar safely when you had a few too many. More than this, we'd like to also believe he's the kind of guy who would show up the next morning with a bag containing some magical hangover cure, and an invitation to join him in the park for a game of kick ball with other like-minded adults.

In other words, like many stars, it's easy to project all kinds of fantasy scenarios on Rudd,  all of them childishly innocent and sexless and, if we're lucky, include him dancing awkwardly.

Netflix's great programmer god algorithm figured out all of this some time ago. Thus, we have been gifted with "Living With Yourself," a lighter-than-meringue eight-episode series that places the preternaturally young-looking 50-year-old in a role as familiar to him, and us, as a pair of broken-in jeans.

Once again Rudd plays a burned-out white-collar worker — here, an advertising executive named Miles— whose best days are behind him, or so he believes. Miles is the brand of Everyman who has everything (more familiar territory): two cars, the grand house in the suburbs, a beautiful wife with a charming Irish lilt named Kate (Aisling Bea).

Despite all evidence of good fortune, Miles is creatively, spiritually, and physically stalled.  He slumps over in meetings and can't even bring himself to toss out a meager pitch on a major project when his boss calls upon him to do so. When he and Kate are together each of them is visibly, energetically going through the motions of a marriage that has bottomed out. Nevertheless, she wants to have a baby. But he has avoided going to the fertility clinic to do his part of the process so frequently that she barely presses him about it anymore.

As is typical of such a man, and convenient for an eight-episode arrangement, Miles jumps at the opportunity for a quick fix for his worries, offered to him by a colleague named Dan ("You're the Worst" star Desmin Borges) who transforms overnight from another middling drudge to a dynamo who is killing it at work and in the office's social aquarium.

Dan refers Miles to the life-changing spa responsible for his head-to-toe, body and mind renewal, a place so exclusive it is located in a nondescript strip mall. There. Miles forks over the $50,000 he and Kate have been saving for their fertility treatments, allows a pair of strangely emotionless men to put him to sleep … and wakes up in a shallow grave, wearing an adult diaper.  Once he stumbles home, he's greeted by the sight of a rejuvenated, thoroughly alive and energetic vision of … himself.

This is where the Netflix equation, as employed by series creator and "Daily Show" alumnus Timothy Greenberg really kicks in, because now the audience is treated to not just one Paul Rudd, but two.

The real problem, of course, is that the "treatment" actually worked too well. Rejuvenated Miles, whose DNA has been entirely reconstructed, is fresh and excited to be in the world because although he has the same memories as broke-down Miles, he is experiencing everything for the very first time. He's resurgent at work, a social butterfly and, best of all, romantic and attentive again with Kate, who is none the wiser.

Original, bitterly depressed Miles despises the new him because he's envious of how much better he is than his previous self. Bright, shiny Miles is basically the version of Rudd we like to watch in every movie. As drooping, hang-dog Miles, Rudd evinces the worst aspects of any disillusioned, exhausted drone — his irritability and short fuse make him difficult to be around, and he's so embittered that he can't actually crawl out of the hole he's in. But he's still wonderfully relatable!

And it's all very … OK? Sort of passable? Netflix … blech? Surely there's a term for the version of fair-to-middling "Living With Yourself" coasts on, an uninspired series  that isn't terrible enough to turn off if you have nothing better to do.

That also makes it ultimate TV dope, a streaming diversion that doesn't demand much of a time commitment or blink-and-you'll-miss-something-important levels of attention.  Most episodes are around 30 minutes long, and a few clock in at around 22 or so.

Rudd excels at embodying the problems and crises of middle age even though the can still very believably pass for a guy in his late 30s. At least "Living With Yourself" grants him the chance to creatively revisit that personality, by way of a narrative that's just interesting enough to make a person curious and otherwise bored person to see what happens next.

Though it ends in a way that isn't particularly inventive, you probably won't be angry at having spent time with Rudd, especially if you're also doing something else mildly useful like knitting or cleaning or splitting atoms or pursuing a cure for cancer.

Anyway, this brings us what "Living With Yourself" is really about, and that's the chance to vicariously hang out with two Paul Rudds. Netflix is betting many people will take it up on this offer because that's what they did when Rudd has previously played versions of Miles in "This Is 40" and "Dinner With Schmucks" and "Role Models." We liked him in those, too.

The stark personality differences between each version of Miles empowers Greenberg to tell this compressed story from multiple points of view, as new Miles wanders about in old Miles' life and improves it along the way, while old Miles seethes and spits, resentful of watching his doppelganger win at a life he did not adequately appreciate.

The two Paul Rudds factor should, as the old gum commercial goes, double our pleasure and double our fun. That it fails to do so is disappointing, but maybe not enough to turn away people who require a few hours to sink into the couch cushions and hang out with a two-dimensional version of a friend who hasn't disappointed us yet and, fingers crossed, never will. Because we need the idea of Paul Rudd and people like him these days.

And that's why we're very much looking forward to hanging out with him again, only this time in a super-powered suit, in "Ant Man 3."

"Living With Yourself" is currently streaming on Netflix.