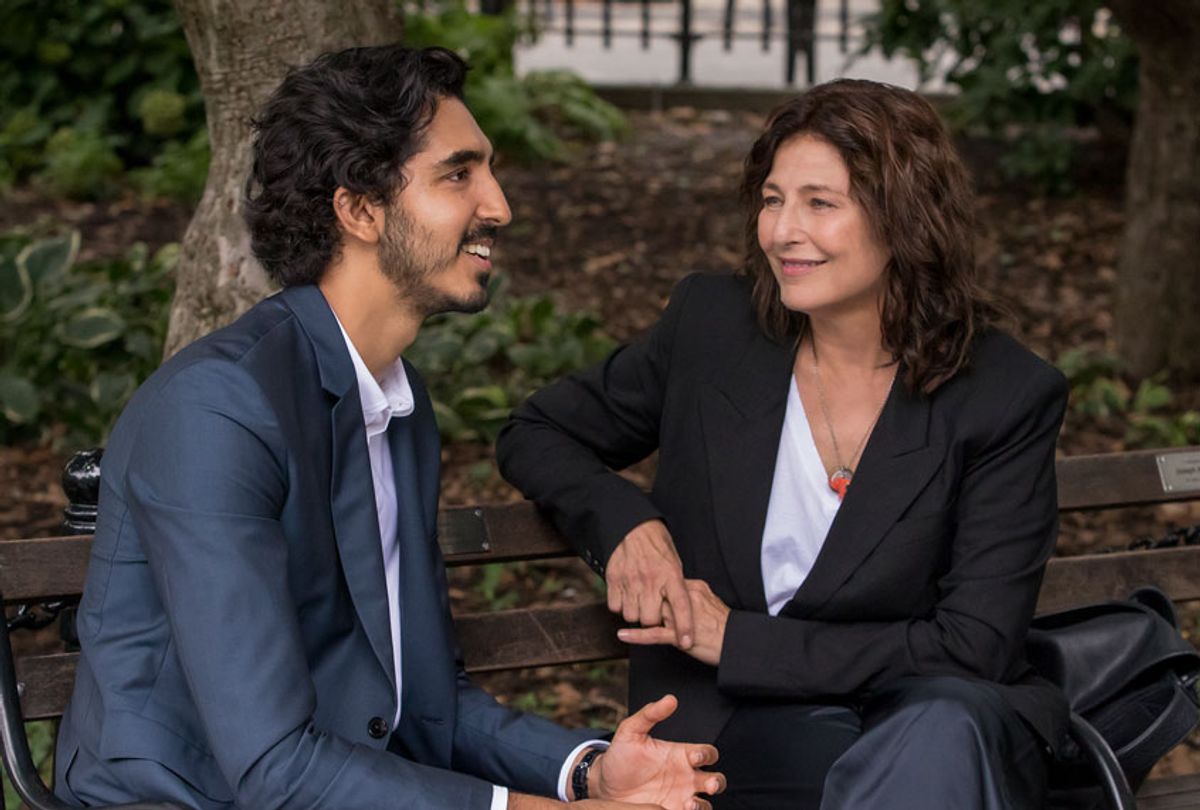 We could all use a good love story or two right about now. When everything around us screams cynicism and despair, we hunger for the nourishment of human connection – the messy, imperfect kind, please, but with encouraging levels of joy. Hence, the addicting allure of "Modern Love."

For 15 years, the Sunday New York Times has been a home for stories of unexpected romance, second chances, and bittersweet breakups in the form of its wildly popular "Modern Love" column. On Friday, Amazon debuted a delightful, dramatized version of eight of its most indelible recent stories, featuring a luminous cast of stars that includes Anne Hathaway, Tina Fey, Andrew Scott, and Dev Patel.

There's also Catherine Keener in the mix, playing an earthy journalist whose profile of a dating app entrepreneur leads both subject and interviewer to reconsider The One That Got Away. THE Catherine Keener. Dressing and talking and acting like a person I know as my friend, author and photographer Deborah Copaken. The episode, "When Cupid Is a Prying Journalist" is quite good, and a little surreal when you know the players. So I called Copaken recently to talk to her about having an indie idol cast as her, and why we're all in love with "Modern Love."

I love the series. And of course I love your character.

I haven't seen the whole series. I've only seen my episode. I wasn't even allowed to read the script. Here's how uninvolved I was: Catherine Keener sent me an email, using her secret email address, saying, "I'm playing you, but I'm not allowed to tell you this, and I'm not allowed to meet with you. But how am I going to play you if I have never met you? Can you please meet for lunch?"

So, we sort of secretly met. I told ["Modern Love" editor] Dan Jones afterwards, "Hey, I met with Catherine Keener." He told me, "Wait, you're not supposed to." I was like, "Well, we did."

She's one of the more awesome people I've ever met. She was really cool. She is who you'd think she'd be, with the characters that she's played, and the way she acts on film. She's the cool girl, but she's the kind cool girl.

What was it about this story, the arc of it, the way that it's about you but it's also really very much about someone else, that made you say, "I have to write about this, in this iconic piece of New York Times real estate"?

As you'll recall, I was sexually harassed out of a job at The Observer. Ken Kurson really wanted that story. It was like, "We want that story. It going to be front page." This is at the time where he was not giving me a job. I said, "Well okay, I'd like to have a job. You promised me a job. Where's that?"

Dan was the next logical editor to call, and I wasn't sure who I was going to call after that. I thought, maybe I'll just put it up on Medium because it's just such a good, weird story. It's a story that writes itself. I wrote that in the subway on the way to work.

Dan Jones said, "Yeah, I don't usually like to have people publish twice, [Copaken had appeared in the column a few years earlier] but this is really compelling, and a weird and beautiful story. We're going to buy it." And with "Modern Love," they buy them for 200 bucks. Not like you get a windfall from that, but it's a nice place to put a story if you really want people to read it.

People forget that writers write for money, but we also write because we want to share an excellent story. The real impetus behind writing is not to get rich, or none of us would be doing it. The real impetus writing is, "God, I have this great story. I want to tell you about it."

The other reason I wanted to sell to the New York Times was I was about to have a book that was coming out, and I wanted to make people aware of that book. "The ABCs of Adulthood" was written with the man I met on Hinge, which was the reason for the story in the first place. It all felt a little bit like coming full circle, and as good a place to place it as any.

And then, what was the response when it came out?

It definitely went viral in its own way. I got a lot of tweets, and DMs, and the whole thing where strangers reach out through your website and  Facebook and post it on their page. You feel like, I put the story out in the world and it is a good story. I knew it was a good story. The writing was secondary here. The story itself was compelling.

My rape story during the Kavanaugh hearings, that really affected my life. This one didn't affect my life so much. It was just like I got a lot of nice notes. No negative notes, which is unusual. Usually you get a lot of, "Die, c**t."

This one, I got not a single negative quote. The New York Times itself published the next week, "Readers respond: Should you go after your long lost love?" I didn't really pay much attention to it because I had nothing to do with that second article. Apparently readers did write into The Times and say, "That's stalking! That's crazy."

Why do you think, of all of the Modern Loves, you're part of this eight that is so special?

I think it has nothing to do with me and everything to do with Justin and Kate, the two people in the story. People want to believe in the grand romantic gesture. We so infrequently see that in real life. We see it in rom-coms all the time. But especially in this day and age of "Hide behind your screen, swipe, swipe, swipe," love has become atomized. And safe. And, don't become too vulnerable, don't reveal too much, don't play your hand, make him wait, all that stuff.

This is really an instance that warms all of our hearts. The TV version of it's different, but in the real version, this is a man who flew across the Atlantic ocean to tell a woman, "I love you and I've always loved you, and I made a big mistake." I think that's why it resonated. The Amazon "Modern Love" is great. I'm really proud of that and I'm excited for it to go out into the world. And good Lord, having Catherine Keener play you, that's like a dream you didn't even know you had come true.

But the real beauty of the story for me is this friendship I had with this young couple. They had their baby at home, and I got called within 24 hours of that birth. I rushed over there on my bike, and I shot some photos of them.  I just hung out with them in bed with their newborn who'd newly hatched less than 48 hours earlier.

Ending the story that I wrote in the article was, "Love begets love begets love." That is what has come out of this. This spark of love which didn't work out with this guy that I met on Hinge, turned into a friendship with the CEO of Hinge, turned into him marrying his long lost girlfriend, turned into a book that I then published, turned into a marriage, turned into a TV show, and then turned into a baby. That's a thing that actually makes me weak when I think about it. Just this domino effect of love. This little spark that leads to so many other sparks, and spreads out. Particularly in this age of Trump, I know it sounds really cheesy to say this, but it's like we need a series like "Modern Love" right now. We need to be reminded that love does beget love.

Your story is so interesting because we are in this moment of looking for something in the machine. This is a story about that, but also about the real human connection.

In an era of just lies, and lack of truth, and hatred, and bigotry, and cruelty to immigrants, and in just so much bullying — despite Melania's best efforts — it feels good to marinate in love.

You have professionally put yourself and your most vulnerable human moments out there in the world. This feels like a different kind of sharing. Does it feel that way to you?

No, because I've always believed that the role of the writer is to share shame in a way. We all do stupid things, we all do crazy things, we all are vulnerable, we all are messed up. When you share shame, you mitigate it for others. That I think more than anything else is the role of the writer, or at least the role that I've set up for myself. "Here's some crazy stuff that's happened to me. It's my own personal story, but they are universal aspects to it. If I share it with you, you may feel less bad about your own crazy things that have happened to you."

I can't even tell you how many people at a bar mitzvah, or a family gathering, or even amongst friends will say, "Yeah, well, I would never put myself out there like you do." I think, okay, that's fine. You don't want to do that. This is what I feel I've been put on earth to do.

You do put yourself out there in a way where you're not afraid to get pushback, because it is all in service of those people who read you and say, "Oh, yeah. That happened to me," or, "That's what I wish had happened to me."
"That's what I wish I had done," in particular. When I wrote the letter to my rapist, I can't even tell you, thousands of women, were writing to me asking how to write their own letter, to the point where I finally put my letter up so that people would have a template.

That's why you do this. That's why I do this. The entire religion of Judaism to me comes down to one thing, which is Tikkun Olam, and that is repairing the world. It Judaism tells us it is our job to repair the world.

Some people do that as doctors, and some people do that as NGO workers, and my daughter's now doing that in Cameroon in the Peace Corps. I don't have some of those skill sets, so I can't be a doctor, but I can write. The way I view my job as writer, photographer, whatever, is to repair the world in whatever way I can. That is what all of us in our own worlds should be doing.

I feel like if you're not doing that, I honestly just feel sorry for you. I really do.

I love the series so much, and I love that it's authentically full of heart. Catherine Keener does such a lovely job of being you.

I cried when I saw it. Dan Jones called me into the New York Times office, and he wanted to watch me watch it. I wanted to be stoic, but I just was crying through the whole thing.

All eight episodes of "Modern Love" are available to stream on Amazon Prime Video.