Trump's promises to end the "crazy, endless wars" have proven to be just another cynical ploy by this con man 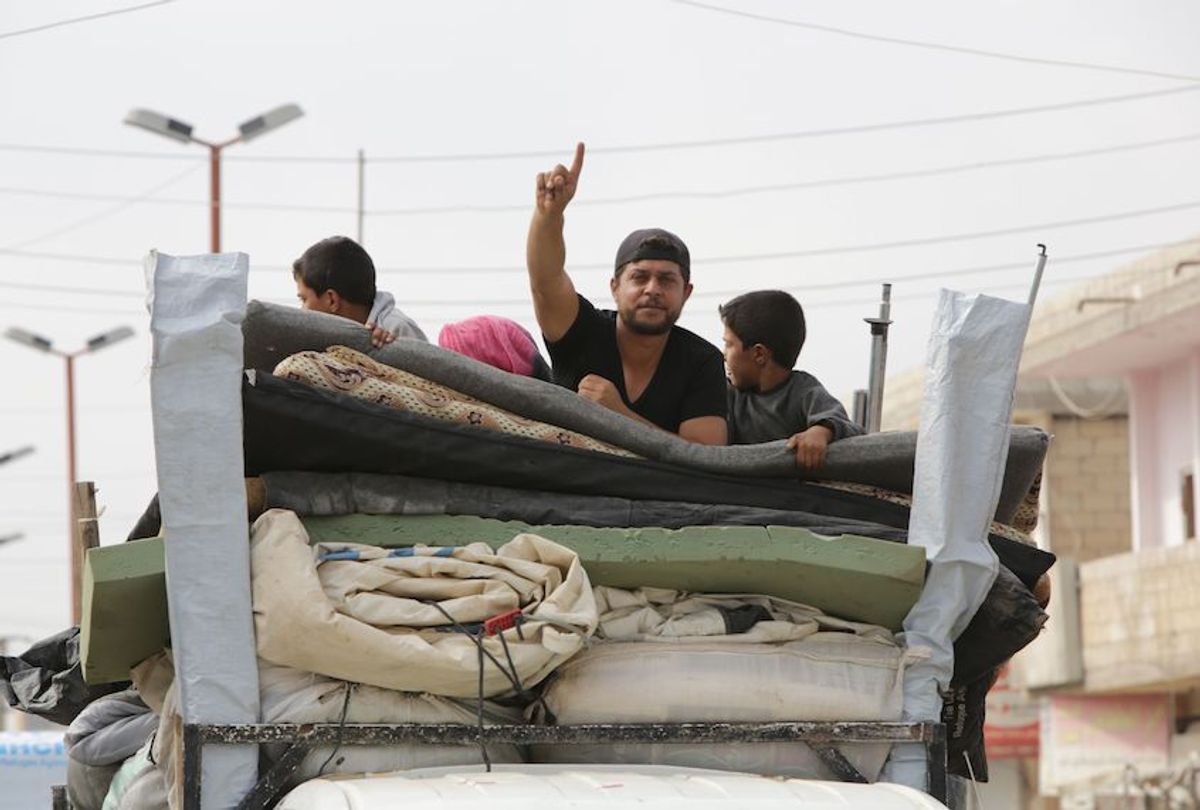 Displaced Syrians arrive in the border town of Tal Abyad on October 17, 2019, as Turkey and its allies continue their assault on Kurdish-held border towns in northeastern Syria. (Bakr Alkasem/AFP via Getty Images)
--

On Monday, October 7th, the U.S. withdrew 50 to 100 troops from positions near Syria's border with Turkey, and two days later Turkey invaded Rojava, the de facto autonomous Kurdish region of northeast Syria. Trump is now taking credit for a temporary, tenuous ceasefire. In a blizzard of tweets and statements, Donald Trump has portrayed his chaotic tactical relocation of U.S. troops in Syria as a down-payment on his endless promises to withdraw U.S. forces from endless wars in the greater Middle East.

On October 16, the U.S. Congress snatched the low-hanging political fruit of Trump’s muddled policy with a rare bipartisan vote of 354-60 to condemn the U.S. redeployment as a betrayal of the Kurds, a weakening of America’s credibility, a lifeline to ISIS, and a political gift to Russia, China and Iran.

But this is the same Congress that never mustered the integrity to debate or vote on the fateful decision to send U.S. troops into harm’s way in Syria in the first place. This vote still fails to fulfill Congress’s constitutional duty to decide whether U.S. troops should be risking their lives in illegal military operations in Syria, what they are supposed to be doing there or for how long. Members of Congress from both parties remain united in their shameful abdication of their constitutional authority over America’s illegal wars.

Trump’s latest promises to “bring the troops home” were immediately exposed as empty rhetoric by a Pentagon press release on October 11, announcing that the Trump administration has actually increased its deployments of troops to the greater Middle East by 14,000 since May. There were already 60,000 troops stationed or deployed in the region, which the Congressional Research Service described in September as a long-term “baseline,” so the new deployments appear to have raised the total number of U.S. troops in the region to about 74,000.

Precise numbers of U.S. troops in each country are hard to pin down, especially since the Pentagon stopped publishing its troop strength in Afghanistan, Iraq and Syria in 2017.  Based mainly on reports by the Congressional Research Service, these are the most accurate and up-to-date numbers we have found:

As for actually ending the wars that all these forces are waging or supporting, Trump escalated the U.S. bombing of Afghanistan, Iraq and Syria in 2017, and these bombing campaigns rumble on regardless of peace talks with the Taliban and declarations of victory over the Islamic State. U.S. air wars are often more devastating than ground warfare, especially to civilians.

In Donald Trump’s first 32 months in office, he is responsible for dropping 17,100 bombs and missiles on Afghanistan and 48,941 on Iraq and Syria, an average of a bomb or missile every 20 minutes. Despite his endless promises to end these wars, Trump has instead been dropping more bombs and missiles on other countries than Bush II and Obamaput together.

When Congress finally invoked the War Powers Act to extricate U.S. forces from the Saudi-led war on Yemen, Trump vetoed the bill.  The House has now attached that provision to the FY2020 NDAA military spending bill, but the Senate has not yet agreed to it and Trump may find another way to exclude it.

Even as Donald Trump rails against the military-industrial complex that “likes war” and sometimes sounds sincere in his desire to end these wars, he keeps hiring arms industry executives to run his foreign and military policy. His first defense secretary was General Dynamics board member and retired General James Mattis. Then he brought in Boeing’s Senior Vice President Patrick Shanahan as acting secretary of defense, and now Raytheon lobbyist Mark Esper as Secretary of Defense. Secretary of State Pompeo made his fortune as the co-founder of Thayer Aerospace. Trump boasts about being the best weapons salesman of all, touting his multi-billion dollar deals to provide the repressive Saudi regime with the weapons to commit crimes against humanity in Yemen.

And yet withdrawal from endless wars is one Trump campaign promise that Americans across the political spectrum hoped he would really fulfill. Tragically, like “drain the swamp” and other applause lines, Trump’s promises to end the “crazy, endless wars” have proven to be just another cynical ploy by this supremely cynical politician and con man.

The banal truism that ultimately defines Trump’s foreign policy is that actions speak louder than words. Behind the smokescreen of Trump’s alternating professions of faith to both sides on every issue, he always ends up rewarding the wealthy and powerful. His cronies in the arms industry are no exception.

Sober reflection leads us to conclude that Trump’s endless promises will not end the endless wars he has been waging and escalating, nor prevent the new ones he has threatened against North Korea, Venezuela and Iran. So it is up to the rest of us to grasp the horror, futility and criminality of the wars that three successive U.S. administrations have inflicted on the world and to organize effective political action to end them and prevent new ones.

We also need help from legitimate mediators from the UN and mutually trusted third parties to negotiate political and diplomatic solutions that U.S. leaders who are blinded by deeply ingrained militarism and persistent illusions of global military dominance cannot achieve by themselves.

In the real world, which does still exist beyond the fantasy world of Trump’s contradictory promises, that is how we will bring the troops home.