The problem with Pinker, and the whole Intellectual Dark Web, is that their claim to represent reason is total crap 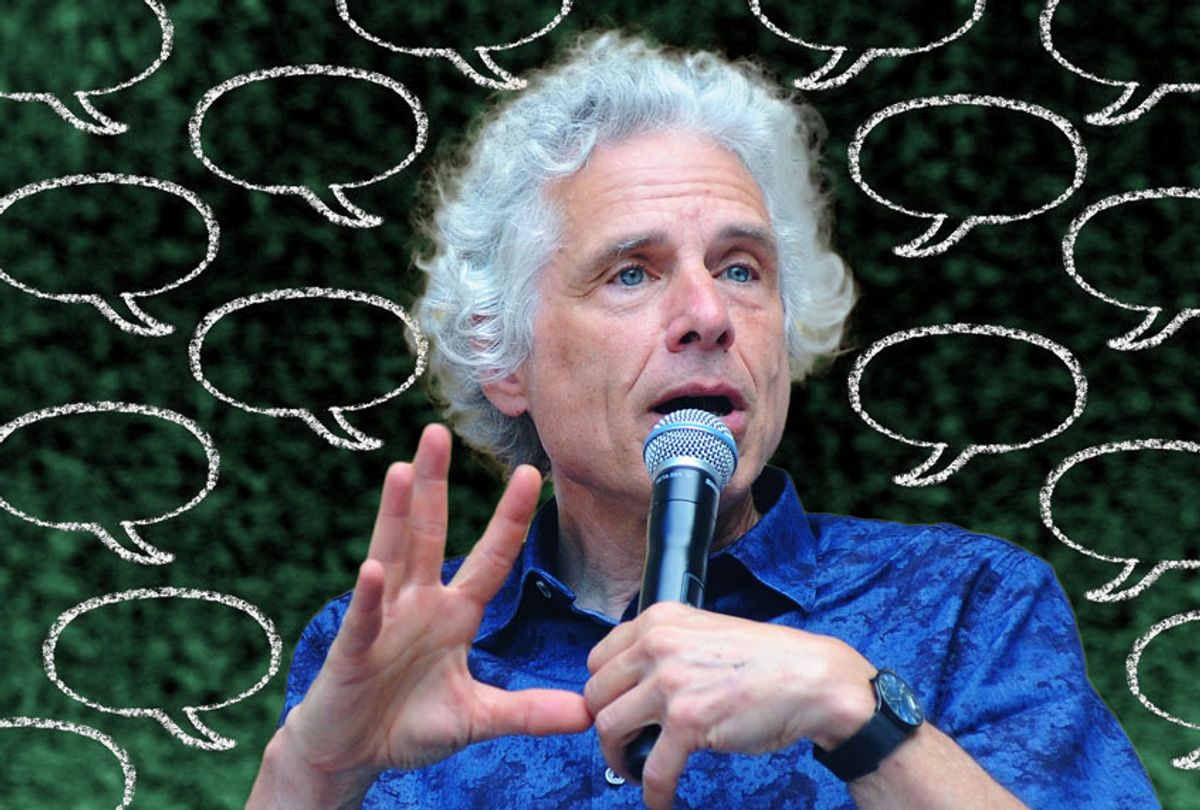 In a recent article for Current Affairs, Nathan Robinson describes Harvard psychologist Steven Pinker as “the most annoying man in the world” because Pinker is the type of person who constantly insists he’s “Just Being Reasonable” while he is actually “being extremely goddamn unreasonable.” Although Robinson’s article was a bit harsh in tone, it gestures at something very real: we’re in the midst of an epidemic of “intellectuals,” almost entirely white men, who claim to embody Reason and Rationality while flagrantly and habitually succumbing to the same tribalistic tendencies that they identify as the Ultimate Enemy.

My own experience with Pinker and his ilk exemplifies the problem. Last January, I published an article here at Salon that summarized some extremely detailed criticisms that I wrote of Pinker's book "Enlightenment Now!" More specifically, I examined a few pages in the book’s “Existential Threats” chapter, one line or passage at a time, since my own research focuses on existential threats (that is, threats to civilization and humanity) and thus I have some knowledge of the topic.

Although Pinker is widely known, or at least was at one point, as a clear-headed, objective intellectual of the highest caliber, his chapter on “existential threats” was overflowing with quotes taken out of context, misrepresented ideas, false dichotomies, blatantly inaccurate claims, poor reasoning, dubious citations, condescending straw-man attacks and cockamamie ad hominems. If the chapter had been a first-year undergraduate term paper, and if the professor were an exceptionally easy grader who habitually dished out A’s for poorly researched papers, Pinker’s chapter might have received a C.

(The popularity of poor scholarship seems to be on the rise, incidentally. Just consider the egregious mistakes made by Jared Diamond in his most recent book, "Upheaval.")

What was most telling, though, was the response to my article. For example, the founding editor of Skeptic magazine, Michael Shermer, tweeted this in response to my critique:

Where @RichardDawkins had his fleas (The Dawkins Delusion etc.), @sapinker has his cockroaches (the oleaginous Phil Torres desperate for attention), artfully squashed here:

Shermer then linked to a blog post by Jerry Coyne, which contained a response from Pinker. Before getting to that, though, Shermer’s tweet is notable for a couple of reasons. First, not only does it contain a personal attack, but the personal attack is overtly uncivil. That’s a bit humorous given that Shermer, as well as Pinker, are famous for accusing progressives, especially those who care about women and people of color, of “incivility.” For example, in May of this year, Pinker tweeted:

Are you concerned about the growing illiberalism, incivility, intellectual conformity, and repression of debate in today's universities? Join us at the meeting of the society set up to encourage viewpoint diversity and constructive debate on campuses. I’ll be giving the keynote.

But Pinker did nothing to call out Shermer for his patently crude, puerile behavior, which has also included calling people he disagrees with (seriously) “namby-pamby bedwetters” and (seriously) “losers.” This is perhaps unsurprising when one realizes the Pinker has unwaveringly supported Shermer despite multiple women accusing Shermer of sexual harassment, assault and even rape. To my knowledge, Pinker has made no effort to contact any of Shermer’s purported victims. And why would he? What does truth have to do with standing by your comrades? Instead, Pinker has repeatedly de-emphasized the issue of rape in society and college campuses by tendentiously pointing to opinions that support his preferred views rather than by honestly examining the totality of evidence, which gives a quite different perspective. All of this is very worrisome, tribalistic behavior. But it gets worse.

Back to the blog that Shermer references. The particular post was published by Jerry Coyne, a biologist at the University of Chicago who has become something of Pinker’s bulldog, defending him against any and all criticisms no matter what, with (almost) no questions asked. One of the most recent examples is Coyne coming to Pinker’s defense after a picture emerged of Pinker with Jeffrey Epstein, the child sex-trafficker who recently killed himself in a New York jail cell.

Coyne quickly dismissed criticisms of Pinker hanging out with Epstein as mere slander and character assassination, writing that suggestions that Pinker should have known better “disturbed me so much — since Pinker is a friend whose character I respect.” The problem is that Pinker appears in the photo with Epstein and he tweeted out an affidavit defending Epstein after Epstein was convicted of sex crimes, which happened in 2008. That is inexcusable and gross — but not to Coyne, whose allegiance is rooted not in evidence but loyalty.

So it should be no surprise that Coyne tore into my critique of the “existential threats” chapter, inaccurately calling it a “hit piece.” Indeed, by any reasonable account, the article was a substantive critique of shoddy scholarship. In fact, I was in touch with four scholars or writers whose work Pinker misrepresents within just a few pages of the chapter. All of them were unhappy with the quality of Pinker’s work, so it’s not like this was just me being a grump.

For example, the political economist Eric Zency, whom Pinker incorrectly describes as an engineer, was livid that Pinker had used a line from one of his papers to mean the exact opposite of what Zency had intended. In an email to me about Pinker’s misuse of his quote, Zency remarked, “How this guy managed to become a public intellectual in fields so far removed from his expertise is something to wonder at.” I agree.

Pinker also wrote a response to my critique, but it only further justifies the view that Pinker is — or has become, sadly — an ideologue who can’t acknowledge when he’s wrong. Just consider that the second sentence of his response makes an ad hominem claim that I’m “trying to make a career out of warning people about the existential threat that AI [i.e., artificial intelligence] poses to humanity. Since ['Enlightenment Now'] evaluates and dismisses that threat, it poses an existential threat to Phil Torres’s career.”

This is obvious nonsense. First of all, the same thing could be said about Pinker: Since his career these days is based on claiming that things have been going quite well for humanity, convincing people that AI poses an existential threat itself could be seen as an existential threat to Pinker’s reputation. How Pinker and Coyne both missed this obvious flaw suggests that they weren’t wearing their critical-thinking hats. The aim of Pinker’s comment was to discredit a critique without having to engage with its substance.

Once again, I contacted four scholars or writers who affirmed errors in a small handful of pages in Pinker’s chapter. I have no doubt that if someone were to find the same problems in a chapter written by, say, Reza Aslan or Linda Sarsour, both of whom are loathed by the Pinker-Coyne crew, they’d be hailing the critique as proof that Aslan and Sarsour are intellectual frauds.

Pinker then defended one of his most flagrant mistakes: classifying a computer scientist at UC Berkeley, Stuart Russell, as someone who isn’t worried about AI. The exact opposite is true! Pinker then doubled down, insisting that his description of Russell was accurate, even though Russell himself told me in an email, which I quote in my article, that he’d “seen this [mention in Pinker's book] and I agree it’s an incorrect characterization.” So, you have Pinker on one side refusing to acknowledge that he incorrectly characterized a person who says he has been incorrectly characterized. This led Julia Galef, a notable “effective altruist” who hosts the Rationally Speaking podcast and has knowledge of the relevant issues, to tweet:

She concludes that the “point is it’s bad that Pinker got this fact wrong and won’t admit it.” This encapsulates the central problem: Pinker and his ilk don’t acknowledge errors when they make them; they are ideologues rather than truth-seekers, willing to bend the facts, launch personal attacks and censor critics to “win” debates. At exactly the moment in history when we need true intellectual leadership, people who exemplify intellectual honesty and integrity, the most, we get stubborn tribespeople.

But the problem is hardly confined to those mentioned above: Shermer, Coyne and Pinker. Consider another “Intellectual Dark Web” (IDW) luminary, Sam Harris, one of the most famous atheists in the world because of his book "The End of Faith." Previously, I never had any reason to believe that Harris was racist — but I do now. He has spent a massive amount of time and energy defending Charles Murray, author of "The Bell Curve," which argues that black people are inherently inferior to white people.

Over and over again, ad nauseam, Harris has used his large platform to suggest that Murray isn’t a junk scientist peddling cowardly racist memes, but someone who’s been victimized by those anti-truth progressives. Even more, Harris apparently believes Murray’s claim that blacks are genetically dumber than whites. In a podcast with Josh Zepps, Harris opines the following with a wholly unjustified degree of epistemic confidence:

As bad luck would have it, but as you’d absolutely predict on the basis of just sheer biology, different populations of people, different racial groups, different ethnicities, different groups of people who have been historically isolated from one another geographically, test differently in terms of their average on this measure of cognitive function. So if you’re gonna give the Japanese and the Ashkenazi Jews, and African Americans, and Hawaiians … you’re gonna take populations who differ genetically — and we know they differed genetically, that’s not debatable — and you give them IQ tests, it would be a miracle if every single population had the same mean IQ. And African Americans come out about a standard deviation lower than white Americans. A standard deviation for IQ is about 15 points. So, if it’s normed to the general population, predominantly white population for an average of 100, the average in the African American community has been around 85.

In other words: black people are dumber than white people. Why? Because of genetic evolution, meaning that IQ is in the genes and the genes of white people are, well, just plain better. What a bold stance, especially amid the ongoing rise of white nationalism in the U.S. and Europe!

In all seriousness, the irresponsibility of being a public intellectual with a large following and spouting unsupported claims with the sort of certainty you might expect from someone reciting the second law of thermodynamics is shocking. If Pinker is annoying, as Robinson claims, then Harris is intolerably obnoxious, constantly demeaning people for not being Rational and Reasonable while simultaneously making an intellectual fool of himself with claims like those above.

Other examples could be adduced, but I don’t have an extra 20,000 words to spare. The point is that the entire IDW movement is annoying. It’s really, really annoying — its champions misrepresent positions without their (mostly white male) audience knowing, and then proceed to “embarrass” the opposition. They embrace unsupported claims when it suits their narrative. They facilely dismiss good critiques as “hit jobs” and level ad hominem attacks to undercut criticism. And they refuse — they will always refuse, it’s what overconfident white men do — to admit making mistakes when they’re obviously wrong. I am annoyed, like Robinson, mostly because I expected so much better from the most popular “intellectuals” of our time.