“Watchmen” is a brutally provocative reckoning of alternate history

Damon Lindelof's new vision is more than just a confrontation of white supremacy. It's an indictment of denial 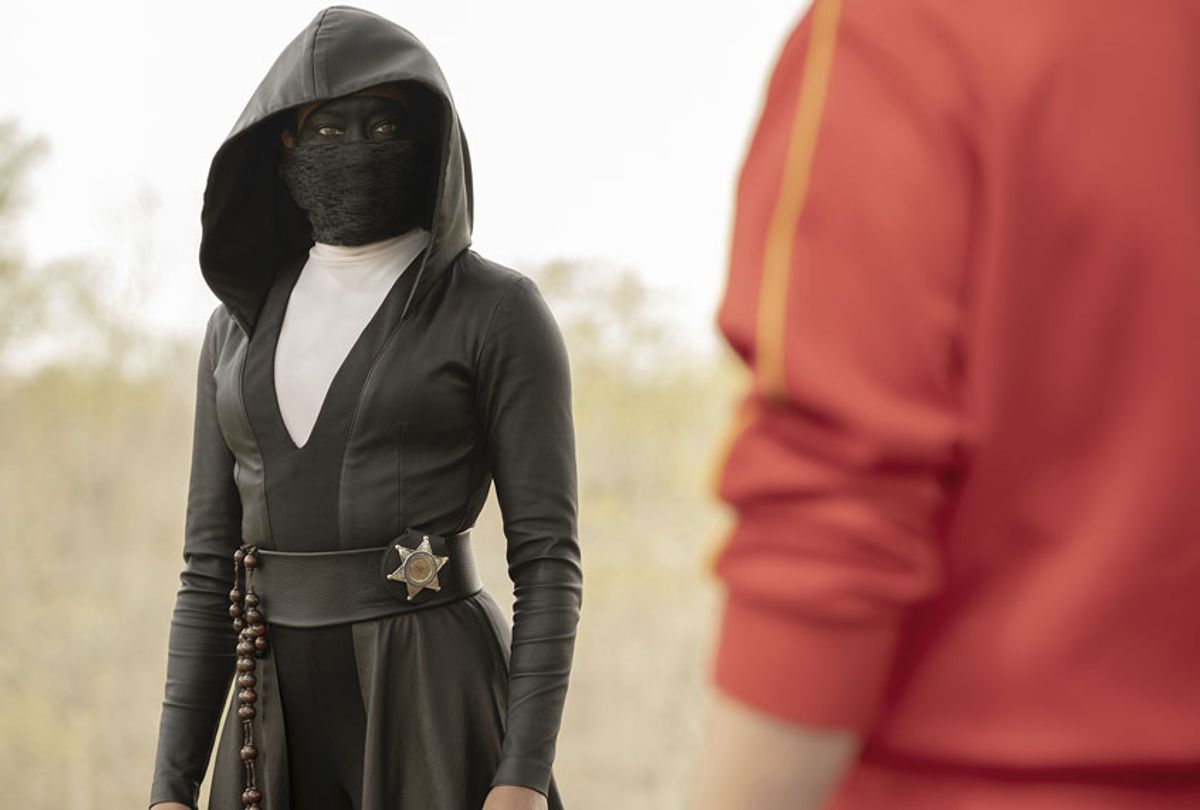 On May 31, 1921, an armed white mob poured into Tulsa, Oklahoma’s majority African-American Greenwood district and began setting it ablaze. Families were driven out of their homes at gunpoint as their neighbors looted their belongings and burned their property to the ground. The lucky ones escaped the city with their lives, the less fortunate were rounded up and detained by law enforcement, and scores of men, women, and children were simply gunned down in the street.

Within the space of 48 hours Greenwood, a beacon of prosperity previously nicknamed the Black Wall Street, was wiped from the face of the earth. More than 10,000 black families were left homeless, and the death toll, tallied at 36 in 1921, is now estimated to be upwards of 300.

In all likelihood, most people who tune in to Sunday’s highly anticipated premiere of “Watchmen” (9 p.m. ET, HBO) will have never heard of this bloody, racist massacre that occurred almost a century ago on American soil.

The thought that such a crime could happen at all beggars belief to those of us who cling to the version of the American story that draws the place as heroic and just, where our greatest wrongs are made right. But nearly two weeks ago came the headlines that scientists and forensic anthropologists have begun the process of searching for the mass graves where untold numbers of murdered Tulsans may be buried.

And this is why series creator Damon Lindelof opens his part of the story with a re-enactment of that massacre that includes historically accurate eyewitness details from the thick of the nightmare. The vision of planes swooping down and dropping bombs on the screaming, unarmed citizens below, and the Klan openly hunting them, might appear to be heightened elements tossed in for dramatic effect, just part of the story that differentiates reality from fictionalized alternate history.

Except, according to records, that is actually what occurred. By air and on the ground, American citizens waged war on other American citizens, and made sure the survivors were frightened enough to stop talking about it, thereby keeping this account out of the history books.

The Tulsa massacre is the origin story of Lindelof’s “Watchmen,” an inspired, riveting continuation of the seminal comic book series co-created by Alan Moore and Dave Gibbons first published between 1986 and 1987.

In the original series Moore and Gibbons presented an interrogation of our relationship with superheroes and the popular notion of heroism itself with its story of people with purported superhuman abilities emerging between World War II and the 1960s and changing the trajectory of history itself.

In Moore’s and Gibbons’ history, these heroes gave the United States political and military advantage, allowing America to win the war in Vietnam, making it a state in the process, and gain the upper hand during the Cold War.

Within that history, too, are the effects of things that never came to be. Richard Nixon was never forced out of office, and term limits were abolished, allowing him to remain in office well into the 1980s, after which he was replaced by our first celebrity president, Robert Redford. It is against the law for freelance masked vigilantes to operate, and those that remain either work for the government or have gone into retirement.

The looming threat of World War III serves as the backdrop to the A-plot, a story comprised of many smaller tales and plots told from various points of view. But this overarching anxiety pitting the United States against the Soviet Union is annihilated when a gigantic squid reported to be from another dimension drops on Manhattan, immediately killing millions.

Lindelof’s continuation is intimately informed by that game-changing climax, only not in any way that the fly-by comic book consumer might immediately connect. The threat in the “Watchmen” comics mirrors the overriding fear hanging over the Reagan era, which is that of nuclear annihilation. Twenty-seven years later, in the alternate and actual histories of 2019, the all-destructive threat assumes the form of violence driven by white supremacy.

Only in this new “Watchmen,” the cops in Tulsa are the ones wearing masks, yellow face coverings for the uniformed beat cops, and more elaborate, fully immersed get-ups for its detectives.  Nominally this protocol allowing the police to remain anonymous was enacted to keep officers safe; only Tulsa’s Chief of Police Judd Crawford (Don Johnson) allows his face to be seen while he is on duty.

In practice, as is quickly evidenced, this inability to be identified allows the cops to operate with near-impunity and intimidate any population it deems a threat – mainly poor whites suspected of making up the ranks of the racist Seventh Kavalry, branded a terrorist organization.

Second in the chain of command is the fearsome cloaked Sister Night, the alter ego of Angela Abar (Regina King), a devoted wife, mother of three, and bakery owner. Angela claims to be retired; a hideaway under her bakery proves otherwise.

And her costume is the sleekest and most intimidating of her band of law-enforcement besides that of her colleague Looking Glass (Tim Blake Nelson), a severe by-the-book soldier whose engulfing reflective mask renders him featureless, and hints at a streak that is equally skeptical and paranoiac.

I suspect each will inspire a few Halloween costumes, maybe and hopefully replacing the popularity of Rorschach’s mask following Zack Snyder’s 2009 theatrical adaptation. In alt-2019, the Rorschach mask is the uniform of the Seventh Cavalry, making it the equivalent of a Klansman’s hood. He’s not around to critique this appropriation of his mantle, but other original characters are, including Doctor Manhattan (referenced but not seen),  the former Silk Spectre, who now just goes Laurie Blake (Jean Smart), and Adrian Veidt (Jeremy Irons), now the lord of a manor and still very much an arrogant tinkerer.

What Lindelof has achieved in the six episodes of “Watchmen” provided for review is extraordinary for its execution alone. It is dark, but it’s also exciting; grim, but also invigorating. The action sequences are stunning, as are the performances. King is a mesmerizing presence, as is Louis Gossett, Jr. as the mysterious Will Reeves, a figure who seems designed to irritate Angela at first but, owing to his age, is obviously there to give her clues as to how modern-day Tulsa connects to its past.

For all of its fantastical details, elements of “Watchmen” resemble the real 2019 too closely to be thought of as comfortable escapism. But the viewers that it hooks will be as fascinated, inquisitive, and passionate as its haters are rabid. If that isn’t a hallmark of inventive, provocative television, I’m not sure what is.

As I stated earlier, Lindelof’s "Watchmen" is not a divergence from the original story but an extrapolation – and a brutally intelligent one – of the original comic’s theories about our blind trust in authority, our misplaced reliance and trust in power, and even our concept of identity, shared and individual.

And yes, part of this has to do with the title itself, and Lindelof’s signature creative approach. The audience that knows him via “Lost” may have been flummoxed by “The Leftovers” and its insistent, unsettling interpretation of the mystery surrounding grief and loss.

What’s funny is that “Watchmen” is more straightforward than “The Leftovers” but will nevertheless confuse anyone who tunes in expecting a straightforward superhero tale, or even an obvious sequel to the comic.

“Watchmen” is very true to the original mythology – so much, in fact, that at the very least I’d advise reading a few summaries about the comic’s plot before diving into the show. This is because Lindelof intentionally steeps “Watchmen” in history: its own, and ours, and the version that answers the various “what if” questions that hold the potential to tweak the trajectory of an entire culture.

On the page, “Watchmen” liberally toys with the meaning of story and the power of perspective, but it also forces the question of whether the systems and structures we presume to be good or working for us actually are. The HBO series also does this in obvious ways, but makes answering that question more complicated and foggier as the series progresses.

But where Lindelof’s take finds the strongest and more fertile common ground with Moore's is in the examination of history, and the difference between what actually happened and the so-called official record.

What “Watchmen” posits throughout its story is that history is only as accurate as the honesty in the edit and of the editor. In large part, history is a means of asking a culture to adopt an identity by remembering the past in a prescribed way. At its most aggressive, it demands we accept a particular point of view to the erasure of others that may blemish that perspective – essentially asking an entire nation of people to live in the heads of a select few.

That the series begins with an actual historic account that’s been intentionally kept out of the books is part of the trick, one that dares the viewer to simultaneously believe and distrust everything we see afterward. That’s very much in keeping with 2019, both the version in “Watchmen” and the one we’re living through. After all, if hate can wipe an entire town off the face of the earth in two days, an event that tens of millions never knew about, then why couldn’t squid rain down from the sky?