Buttigieg, who was initially viewed as a long-shot presidential candidate, is now in a three-way race in Iowa 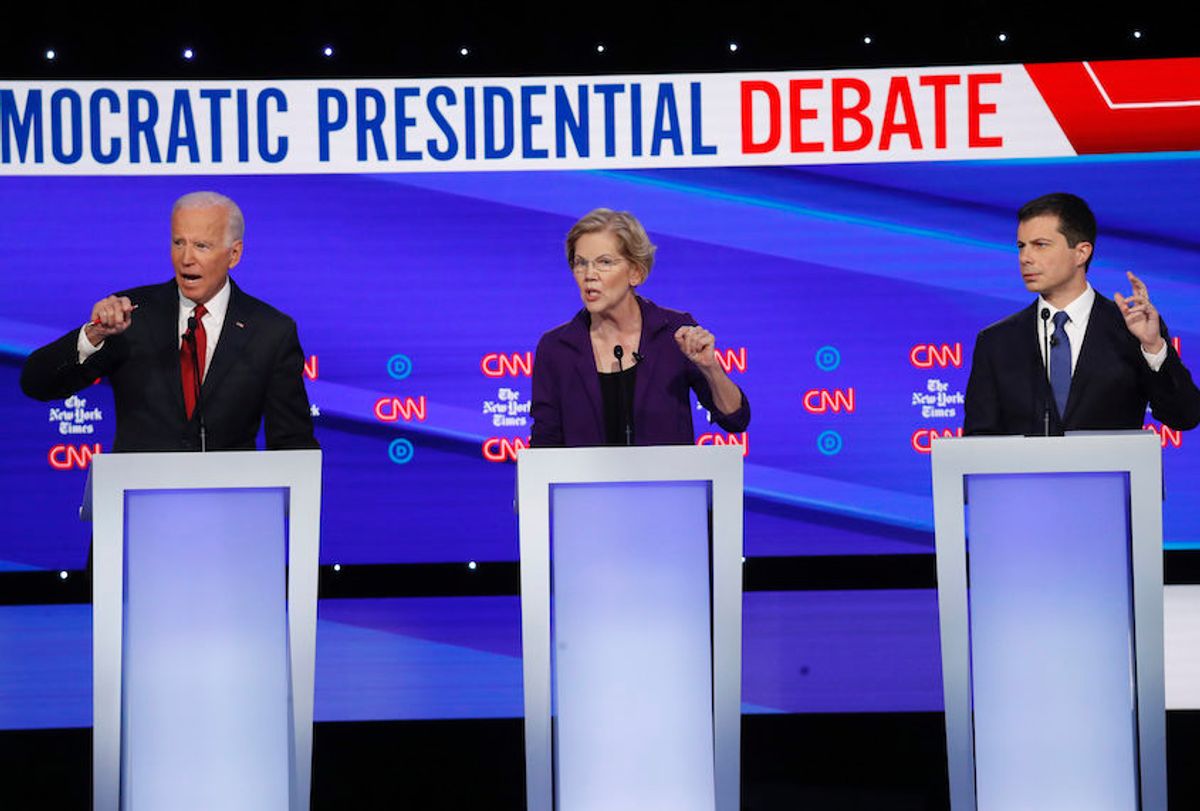 Buttigieg, who was initially viewed as a long-shot presidential candidate, is locked in a three-way race with Biden and Warren, according to the results of a new Suffolk University/USA Today poll released Monday. The poll reveals that 13 percent of likely Democratic voters in the first-in-the-nation caucus state support Buttigieg, who trails Biden at 18 percent and Warren at 17 percent.

The poll finds a significant increase in support for Buttigieg following his earlier performance in the Suffolk University/USA Today poll conducted in June. In that summer survey of likely Democratic caucus-goers, Biden led the pack with 24 percent. He came out ahead of Warren by double-digits, while Buttigieg trailed at a distant 6 percent.

California Sen. Kamala Harris, who had then leaped into second place after her much-lauded performance at the first Democratic debate, has sunk 13 points since then. She now finds herself in a three-way tie for sixth place with Hawaii Rep. Tulsi Gabbard and Minnesota Sen. Amy Klobuchar. Vermont Sen. Bernie Sanders earned 9 percent support in both polls.

"Iowa is unquestionably up for grabs," David Paleologos, director of the Suffolk Political Research Center, said. "[Buttigieg] has found a lane and is accelerating toward the front of the pack, surpassing Bernie Sanders. All of this is happening while the number of undecided voters continues to grow as Democratic caucus-goers pause to reevaluate the changing field."

At the same time, the survey revealed that the number of caucus-goers who say they are undecided has surged 8 percent since June to 29 percent. Among those who have a preferred candidate, nearly two-thirds (63 percent) said they could change their minds to support another candidate before the caucuses.

The poll brought additional good news for both Buttigieg and Warren in Iowa. The candidates led the primary field as the second choice of voters — Warren was picked by 22 percent and Buttigieg by 14 percent. That could be significant if and when other candidates drop out of the race or if other candidates fail to receive support from at least 15 percent of voters in the caucus, which is required by the state to be perceived viable. Supporters of candidates that fall behind the 15 percent threshold often cast a ballot for their second- or third-choice candidate.

Among the second tier of candidates, billionaire liberal activist Tom Steyer came in at 3 present. Three other candidates reached just below 3 percent: Harris, Gabbard and Klobuchar.

The latest Suffolk University/USA Today poll also inches two presidential hopefuls — Gabbard and Klobuchar — closer to qualifying for the November debate. To appear on stage, candidates must achieve at least 3 percent support in four polls approved by the Democratic National Committee since Sept. 13 — or at least 5 percent in two early state polls. They must also earn contributions from at least 165,000 unique donors, with at least 600 coming from 20 individual states. Those requirements must be met by Nov. 13.

The survey is Klobuchar's second qualifying poll and Gabbard's first. Both have said publicly that they have already achieved the donor threshold. Eight contenders have already qualified for the debate on Nov. 20. Two other candidates have passed the donor threshold but not the polling threshold: Former Housing and Urban Development Secretary Julian Castro and former Texas. Rep Beto O'Rourke.

The Suffolk University/USA TODAY poll was conducted Oct. 16-18, surveying 500 likely Democratic caucus-goers. The margin of sampling error is plus or minus 4.4 percent.