“Breakfast, Lunch & Dinner”: Come for the celebrities; stay for the personal revelations 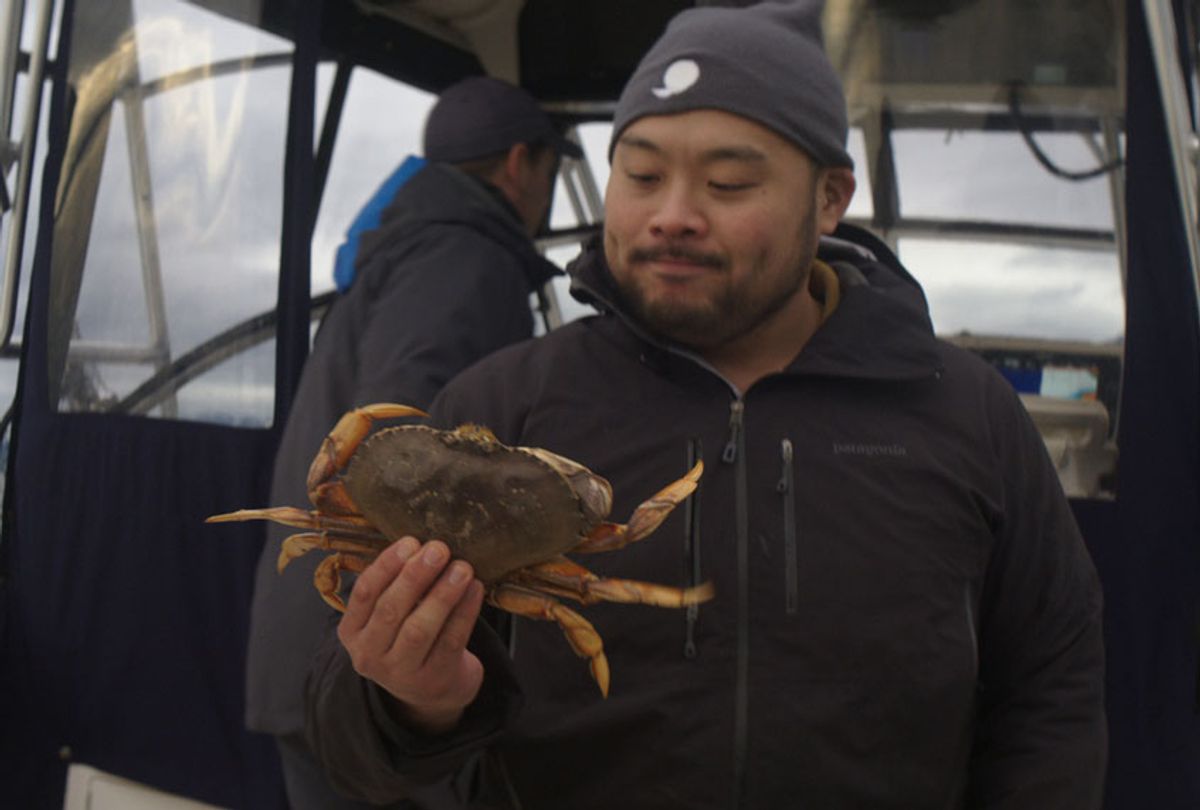 In the first episode of his new Netflix series, “Breakfast, Lunch & Dinner,” chef David Chang and actor Seth Rogen follow a marine biologist into a back room of the Vancouver Aquarium. Because Rogen is involved, weed is (predictably) as well — and the two men are just a little high as they reach into a tank holding a ruddy orange octopus named Ceph Rogen, who reaches up and curls its tentacles around their fingers.

This takes place after the pair have eaten fresh, jelly-filled doughnuts from Lee's at Granville Island Public Market and tried to navigate a hedge maze, but before they take a cheesy commemorative photo in front of a green screen by the aquarium exit.

“You complete me,” Chang laughingly says to Rogen, who responds, “Want to just do this again tomorrow?” Andrew Gold’s “Thank You For Being a Friend” kicks in and the credits roll.

There’s an entire Subreddit dedicated to content like this; it’s called r/UnexpectedlyWholesome. As the name suggests, it’s a collection of moments that turn out to be infinitely more uplifting than one would anticipate. This episode of “Breakfast, Lunch & Dinner” definitely falls in this category.

The four-part series, which is presented in the credits as a follow-up to Chang's 2018 food/travel series “Ugly Delicious,” follows the chef as he and a celebrity friend explore a city together. Rogen has his hometown of Vancouver; model, cookbook author and Twitter personality Chrissy Teigen takes Marrakech, Morocco; filmmaker and actor Lena Waithe is Chang’s companion for Los Angeles; and Kate McKinnon and Chang explore Cambodia’s capital Phnom Penh.

Food, of course, serves as a guiding framework for each of the episodes — and there is a lot of it. But where “Ugly Delicious” uses dishes like pizza, barbecue, and fried chicken as vehicles to explore cultural and political topics like racism, xenophobia, classism and appropriation, “Breakfast, Lunch & Dinner” goes in a different direction. The episodes, as a whole, feel very casual, like viewers are just watching two friends have an epic day together in a cool place — which is essentially what’s happening. With McKinnon as an exception, Chang has real-life connections with the celebrities featured in the show. It has a “Comedians in Cars Getting Coffee” vibe in that way.

This both nips some of the inevitable “Parts Unknown” comparisons and showcases Chang in a new light. Sometimes in “Ugly Delicious,” with its very smart and timely content, it feels like Chang’s on-screen personality wildly vacillates between an intensely obsessive researcher — like when he feeds Doritos to a test group who claim adverse reactions to MSG in Chinese food — and him just kind of being there.

In “Breakfast, Lunch & Dinner,” we see Chang in what feels like a more natural environment; he’s not seeking any specific answers, but he is obviously relishing in exploring. This leads to some interesting discussions with his guests. Some of these are fairly surface-level, like when Rogen discusses how he learned to roll a joint or Teigen calls up her husband, John Legend, to get him to do a song on the fly.

But this low-pressure environment also presents opportunity for some really genuine introspection from the guests, resulting in conversations that echo the topics Chang so wanted to dissect in “Ugly Delicious,” like when Chang and Waithe discuss identity and representation, or when he and Rogen talk about some of shame the children of immigrants feel about their parents’ food. We get a peek into the lives behind the celebrity facades of the guests in really enjoyable ways.

In this way, while the series is perfectly successful as a travel show, with its beautiful filming and sweeping landscape shots, “Breakfast, Lunch & Dinner” is even more successful as an interview program; which I think points to a certain truth that is well-known, but is delightful to watch bear out on television. Sitting down with someone over a meal — whether that’s a whole Moroccan lamb roast or strawberry mochi in LA — is a naturally bonding experience. It opens the door for some tough topics, while also allowing for easy watching.