Will the GOP become the party of blue-collar conservatism? 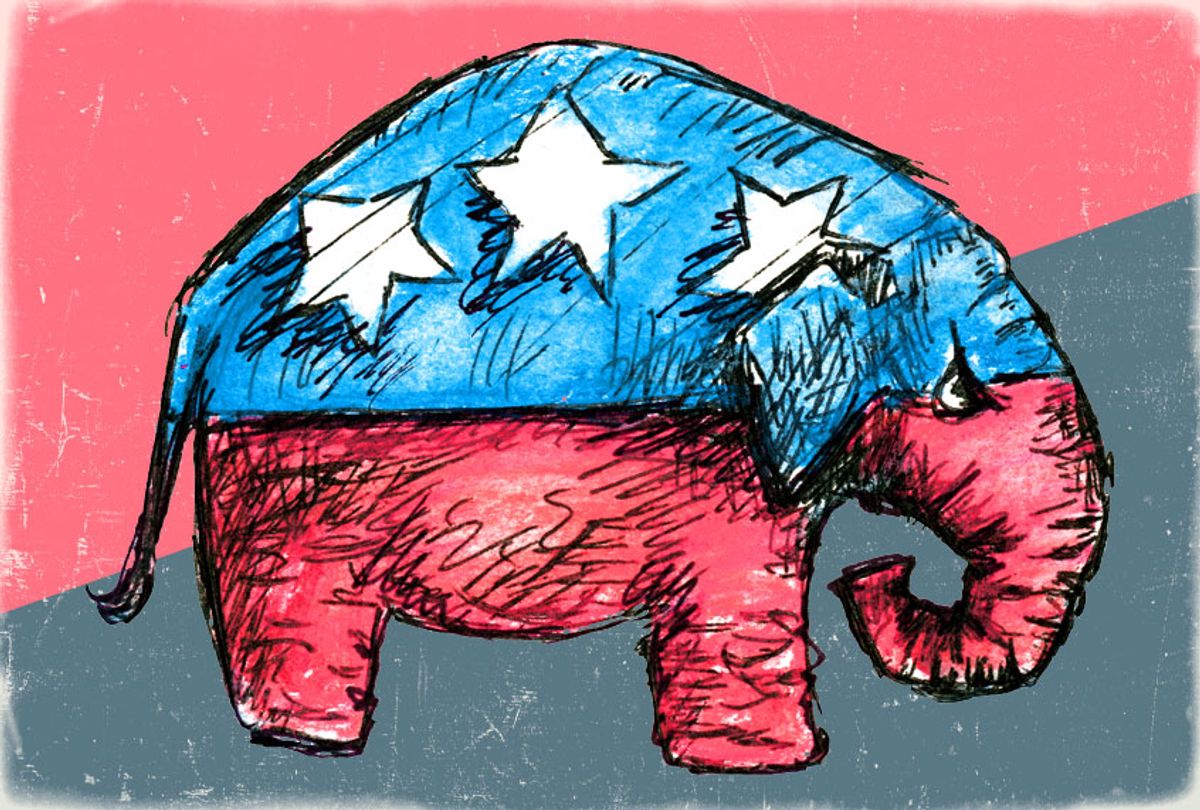 From the days of Franklin Delano Roosevelt onward through to the 1990s, the Democrats had long been considered the party of the working class. That perception lingered long after the fact that by the 1990s, they had more accurately become the party of Wall Street and Silicon Valley, often embracing policies at variance with their traditional blue-collar supporters. As Thomas Ferguson, Paul Jorgensen, and Jie Chen outline in a paper sponsored by the Institute for New Economic Thinking: “Within the Democratic Party, the desires of party leaders who continue to depend on big money from Wall Street, Silicon Valley, health insurers, and other power centers collides [sic] head on with the needs of average Americans these leaders claim to defend.” So the Democratic Party, a historically center-left political grouping, has increasingly embraced a neoliberal market fundamentalist framework over the past 40 years, and thereby facilitated the growth of financialization (whereby the influence and power of a country’s financial sector become vast relative to the overall economy).

Donald Trump exploited that shift during his 2016 campaign: Not only did he proclaim his love for “the poorly educated,” but he also campaigned as an old Rust Belt Democrat — not only by attacking illegal immigration and offshoring, but also coming out against globalization, free trade, Wall Street, and especially Goldman Sachs.

As president, of course, Trump has proven incapable of “walking the walk,” even as he continued to speak about “draining the swamp” and eliminating business as usual in Washington. But there is increasing evidence suggesting that some of the more ambitious and opportunistic politicians in the GOP are seeking to exploit the material abandonment of working-class voters by the Democrats. Both Senators Josh Hawley and Marco Rubio are trying to move the party in a more pro-worker direction, championing a new kind of blue-collar conservatism that is supportive of unions and policies that emphasizes the “dignity of work.” Likewise, Senator Tom Cotton of Arkansas has recently introduced a tax rebate for lower-income Americans to offset the tariffs President Trump has proposed on Chinese goods — essentially an annual payment from the federal government to citizens to offset any increased cost in consumer goods that might arise from Trump’s proposed tariffs, thus neutralizing the economic impact, and countering the political argument that the president’s trade war on Chinese goods ultimately represents a tax on American consumers. As Henry Olsen notes in the Washington Post:

“Cotton’s approach addresses both the economic and political challenges arising from Trump’s tariffs. Economically, giving the revenue back to average Americans offsets the expected rise in prices they will face as a result of the tariffs. Consumer spending, which was feared would decline in response to the price hikes, would now likely stay high: Why cut back in spending when you’re not losing any money? That would keep the economy strong.”

In other words, it’s a tax-time Universal Basic Income.

Cotton’s proposals would augment a little-discussed feature emerging now in the U.S. labor market, as CNBC’s Jeff Cox writes: for the first time in this cycle (which started in 2009), “the bottom half of earners are benefiting more than the top half — in fact, about twice as much, according to calculations by Goldman Sachs,” using data from the Bureau of Labor Statistics. More recently, Derek Thompson of the Atlantic cites additional work by labor economist Nick Bunker, who makes the case that “wage growth is currently strongest for workers in low-wage industries, such as clothing stores, supermarkets, amusement parks, and casinos. And earnings are growing most slowly in higher-wage industries, such as medical labs, law firms, and broadcasting and telecom companies.” Absent a significant growth slowdown, these workers might increasingly identify their economic self-interest with Republicans, not Democrats, particularly given the increasingly restrictionist stance the GOP is adopting on immigration, which will further tighten the labor market structurally and enhance the relative bargaining position of American blue-collar workers.

The one lingering question is whether or not this trend will yet supersede the power and influence of the GOP’s historic corporate constituencies, notably oil, mining and chemical companies, Big Pharma, tobacco, the arms industry, and civil aviation. On the face of it, this could well prove to be a tall order. But it is conceivable if trade policy is ultimately rendered subordinate to national security concerns, as increasingly appears to be the case today. In the words of Michael Lind, all it would take is a national developmental industrial strategy predicated on sustaining U.S. military supremacy: “to identify and promote not specific companies but key ‘dual-use’ industries important in both defense and civilian commerce.” That would seem to be a more likely scenario for the GOP, one that would build on Trump’s steady inroads into the Democratic Party’s traditional blue-collar constituencies, while simultaneously catering to the party’s strong links to national defense interests.

Although a military-industrial strategy might run counter to some of the interests of the party’s traditional corporate backers (such as Charles Koch), it would likely prove hugely beneficial to America’s manufacturing heartland, particularly the country’s disaffected blue-collar workers. Historically, these workers have been Democrats, but their livelihoods have been decimated by decades of trade liberalization and other neoliberal policies. As Lind points out, a national industrial policy based on the model of Alexander Hamilton but married to “Cold War 2.0” could, therefore, consolidate the GOP’s efforts to become more of a party of the working class. And such a policy is not historically anomalous: during the original Cold War, free trade and globalization were always subject to the constraints of containing the expansion of Soviet-led communism. A large chunk of the world under the enemy sphere of influence was off-limits to American trade and capital.

Today, even with the overriding influence of the Koch brothers, and the Mercer family, a number of Republicans are geopolitical hawks first, and economic libertarians second. They increasingly see that it makes no sense to go to war against wage earners while claiming to protect the same wage earners from Chinese competition, especially if Beijing becomes the new locus of an emerging Cold War 2.0. Furthermore, if they are in safe, rock-solid GOP districts, they are less vulnerable to a primary attack from corporate interests antithetical to those positions. As geo-economics is increasingly remarried to geopolitics (as it was during the original Cold War), “blue-collar conservativism” will likely gain increasing policy traction in certain conservative circles, even though Republicans still have a ways to go before they can fully shift their party’s agenda toward a modern-day equivalent of “Bull Moose” progressivism.

Donald Trump is, first and foremost, a wrecker, as opposed to a builder. Arguably, that is one of the things that got him elected in the first place. But he has set the stage for a further political realignment, especially as more educated whites and elites migrate to the Democratic Party, and traditional Southern populists reside in the GOP. There are very few Fritz Hollings types left in the party, whose views on trade, immigration and manufacturing are closer to the Democrats’ historic New Deal constituencies. This theory, though, is not watertight, and new coalitions are still very much in flux. But as things stand today, ironically, the Democrats now have trade and open borders policies that are closer to those of the old Reagan/Bush Republicans and libertarians such as the Koch brothers, while the GOP policy under Trump is gravitating toward the old positions of the AFL/CIO on both trade and immigration, a policy combination that makes the embrace of a kind of blue-collar conservatism even more credible for the GOP. Furthermore, as trade issues (especially in regard to China) are increasingly conflated with national security concerns, the GOP may ultimately decide to build on Trump’s attempts to re-domicile key supply chains back to the U.S. From the national security hawk perspective, this will ensure that strategic industries necessary to sustain American military power remain on home shores, even if this conflicts with the principles of free trade, limited non-interventionist government. Sustaining permanent production on U.S. soil, not just innovation in America and production elsewhere, would be profoundly favorable to blue-collar workers (hitherto among the biggest casualties of globalization) and likely consolidate the GOP’s efforts to become the future party of the American working class, unless of course the Democrats suddenly and unexpectedly reclaim their New Deal legacy.