Remember Benghazi? Republican concerns about "secret" hearings are newfound in the Trump era

GOP lawmakers stormed a secure facility on Capitol Hill in protest this week. They seem to have forgotten history 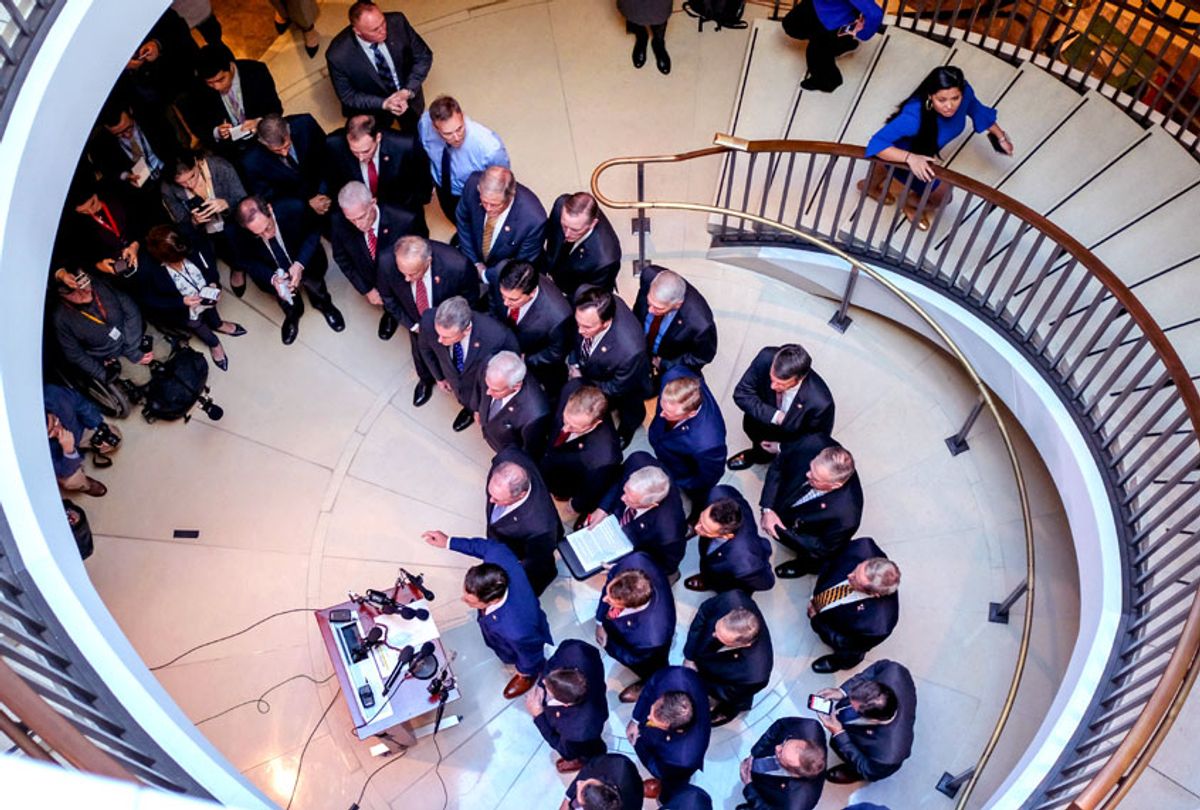 A band of Republican lawmakers derailed the impeachment inquiry testimony of a Pentagon official Wednesday when they stormed a secure facility on Capitol Hill in protest of closed-door hearings, a process which they previously defended under the administration of former President Barack Obama.

Rep. Matt Gaetz, R-Fla., led the group of about 40 House Republicans who invaded the Sensitive Compartmented Information Facility (SCIF), where House investigators were set to question Laura Cooper, a Department of Defense official who focuses on Ukraine and Russia.

Although she testified for three hours after things settled, the stunt delayed Cooper's testimony for five hours due to security concerns, Politico reported. Cooper is the first Defense Department official to defy the administration’s blanket refusal to participate in the inquiry.

The stunt had the support of President Donald Trump, Bloomberg reported, and was later praised by White House press secretary Stephanie Grisham on Fox News.

“I led over 30 of my colleagues into the SCIF where Adam Schiff is holding secret impeachment depositions,” Gaetz tweeted. "Still inside—more details to come."

Gaetz’s account later claimed that the tweet was sent by “staff,” in an apparent effort to stave off criticism that the group had violated House rules preventing electronics from being brought into the SCIF in an effort to protect sensitive government information.

Despite Gaetz’s move head off the criticism, a New York Times photo showed a House Republican holding up his phone as he appeared to record the stunt despite a sign on the door warning that "cameras and other recording devices" were "prohibited without proper authorization."

Rep. Alex Mooney, R-W.Va., even published audio of a phone call, which he said he made inside the secure facility, prompting journalists to note he was openly broadcasting himself “violating national security protocols.” Despite his own claim to the contrary, Mooney asserted that the phone call had been placed outside of the room.

Democrats said lawmakers who brought phones into the room violated security protocols and called for the House sergeant-at-arms to “take action” against offending lawmakers.

"This unprecedented breach of security raises serious concerns for committee chairman, including me, responsible for maintaining SCIFs," Homeland Security Committee Chairman Bennie Thompson, D-Miss., said in a letter to Sergeant-at-Arms Paul Irving. “I urge you to take House-wide action to remind all members about the dangers of such reckless action and the potential national security risks of such behavior.”

Republicans stayed in the room for more than three hours, even ordering pizza, The Daily Beast reported. Rep. Debbie Wasserman Schultz told the outlet that the Republican lawmakers “were just screaming about the president and what we’re doing to him.” The lawmakers were ultimately kicked out after the sergeant-at-arms ruled that they had no right to be there.

Gaetz said at a news conference that the stunt was a protest of the alleged secrecy behind the impeachment inquiry. Ironically, about a quarter of the lawmakers who participated in the move were among the 48 Republicans who sit on the investigative committees responsible for the impeachment probe and were allowed in the room regardless, journalist Marcy Wheeler noted on Twitter.

Republicans even “asked to be arrested,” Fox News’ Chad Pegram reported, adding that they believed "the optic of being frog-marched out of the SCIF in front of TV cameras" would help advance the "GOP narrative."

Gaetz also violated House rules by handing out “expired congressional passes to some uncredentialed reporters and the crew of HBO’s ‘The Swamp,’” HuffPost reported, noting that the show is “following Gaetz’s efforts to combat the impeachment process.”

Yet Republicans’ concerns about closed-door hearings appear to be newfound in the age of Trump. Republicans strongly defended closed-door interviews when they led a multi-year crusade on Benghazi during the Obama administration.

“The committee’s preference for private interviews over public hearings has been questioned,” former Rep. Trey Gowdy’s Benghazi committee said in its final report. “Interviews are a more efficient and effective means of discovery. Interviews allow witnesses to be questioned in depth by a highly prepared member or staff person. In a hearing, every member of a committee is recognized — usually for five minutes — a procedure which precludes in-depth in-depth focused questioning. Interviews also allow the committee to safeguard the privacy of witnesses who may fear retaliation for cooperating or whose work requires anonymity, such as intelligence community operatives.”