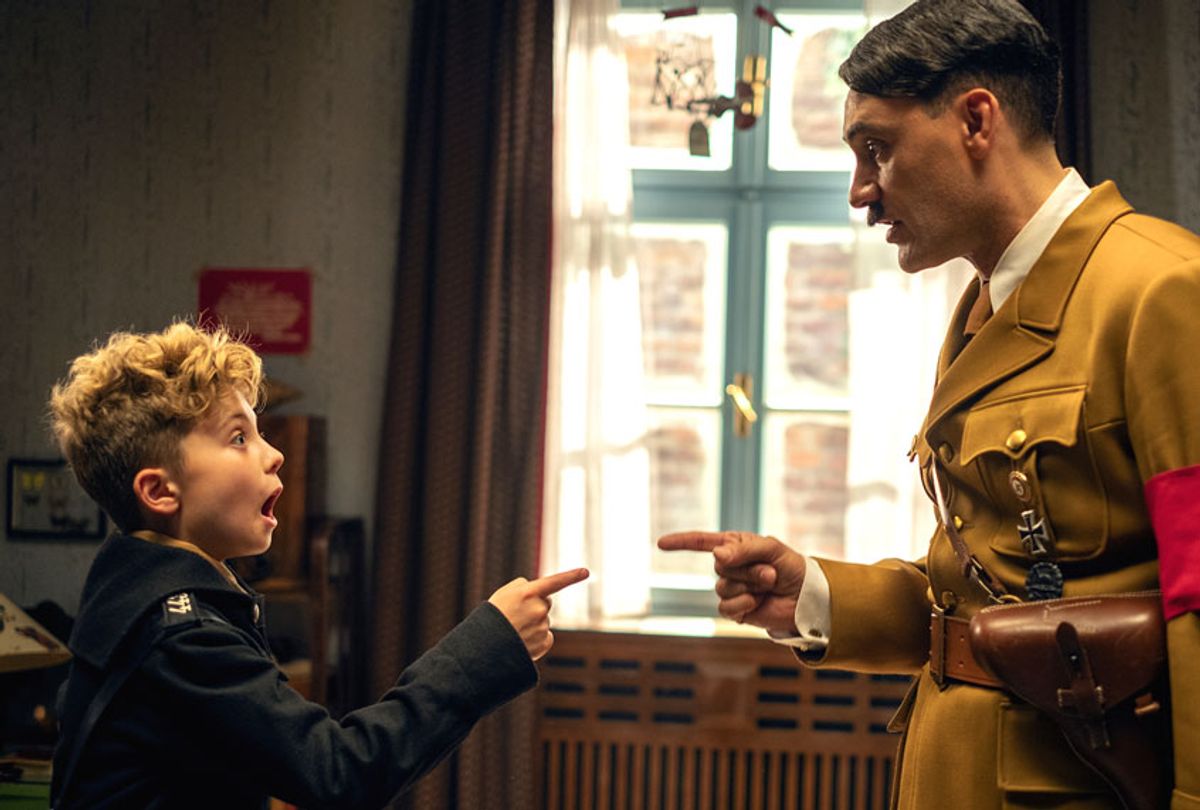 Achtung! The following contains spoilers from “Jojo Rabbit.” For a non-spoilery read, check out Salon’s review of the film.

In the WWII satire “Jojo Rabbit” director Taika Waititi dons a uniform and toothbrush mustache to play Adolf Hitler, the imaginary friend of 10-year-old Jojo Betzler (Roman Griffin Davis). This foolish Führer is both childish and adorable. He leaps about with loose-limbed exuberance and plans to populate his empire with “rhinoctopuses.” It’s a role Waititi plays mainly for laughs, except for one revealing moment.

After Jojo begins to befriend the Jewish girl Elsa (Thomasin McKenzie) hiding out in his home, he observes, “She doesn’t seem like a bad person.” Adolf is not pleased, and instead of his usual petulant pouting, he launches into a diatribe that gives way to a chilling real-life speech Hitler once delivered.

“You really see Adolf turn and really go at Jojo. Those are real words from a speech that Adolf Hitler made,” Neal told Salon in a phone interview. “Taika is a very funny, hilarious person, but then in that moment, seeing that performance, it was horrible, just seeing that hatred and the conviction behind it as well. It was real.”

This is not a moment of character inconsistency, rather a reflection of how Jojo has evolved over the course of the movie. Imaginary Adolf is more childlike and eager at the beginning, reflecting Jojo’s eagerness and blind patriotism to the Aryan cause. As the boy becomes more empathetic to Elsa and experiences tragedy firsthand, he begins to see more clearly, and therefore Adolf begins to act less idealistically. The real Hitler from newscasts and the radio filter through. He’s still the product of a child’s fertile and fantastical mind, but he’s now scary as well as silly.

“This version of a mentoring Hitler was a way to externalize that battle inside Jojo,” said Neal. “He had been indoctrinated to think a certain way, and then over the course of the movie, he obviously faces that what he's been told is wrong and he learns to think for himself. That is externalized by his relationship with Adolf and Elsa.”

Waititi, who also directed “Boy” and “Hunt for the Wilderpeople,” often tells stories through the eyes of a child. Although this narrative approach grounds the story in a different way, it nevertheless speaks to the child that was once in all of us. When the scales fall from Jojo’s eyes, this parallels how everyone feels when reality intrudes upon a constructed fantasy. In the case of authoritarian leaders like Hitler, it’s possible to view them as both ridiculous yet dangerous, holding both assessments simultaneously in our minds – much like the movie’s overall tone.

Waititi makes sure that lurking threat never goes away, not even in the film’s most heightened, ridiculous moments. When Gestapo agents led by Captain Deertz (Stephen Merchant) goes to Jojo’s house searching for signs of rebellion, this launches a rousing yet lengthy exchange “Heil Hitler” greetings done individually. This one-by-one "Heil Hitler" routine must then start all over again when Hitler Youth camp leader Captain Klenzendorf (Sam Rockwell) drops in. It’s a ludicrous exchange straight out of Monty Python or the doctor scene in “Spies Like Us.”

“We were sending up the stupidity of the costumes, the behaviors, the scenarios, the etiquette around these people. And I think that scene really shows how stupid the whole thing is,” said Neal.

But even though the round robin repeats itself one more time, in an instant, the mood  has changed because of one crucial difference. Afraid that she’ll be discovered, Elsa instead decides to hide in plain sight, masquerading as Jojo’s recently deceased sister Inga. This of course means another round of greetings with the Gestapo, but when Elsa says “Heil Hitler,” it’s with horrifying dramatic irony that is palpable to the audience. By speaking these poisonous words, words spoken by those who'd kill her people, she’s saving her own life.

Waititi does this over and over throughout the film, building up laughs and then upending them by exposing the risk never far behind. This required a certain flexibility with filming.

“What Taika is looking for, because it's such a tonal balance, is when we were filming it’s to really capture a range,” Neal explained. “You don't know until you get to the edit how much you will or won't need. So you have to shoot everything, and then be able to strip away what you don't need.”

And as much as Waititi delivers the comedy, he also nurtures the discomfort, even if that means not sparing his child stars.

“There moment where you feel your skin crawl a little bit when we were filming. There's a performance of Roman's, during one of the first times Jojo meets Elsa … and he stands up and he says, ‘How dare you, Jew?’” said Neal.

“It really freaked me out actually, just seeing a little boy with that much hatred for someone and just completely ill-informed was pretty horrible. But we want audiences to feel that, and so you have to perform it.”

Casting was a challenge to find a young actor to embody Jojo, someone who has the Aryan good looks but also can play the challenging tonal tightrope convincingly throughout the film. Waititi prefers to cast from relative unknowns whose performances feel natural and not too polished.

“It’s not saying we were looking for a little right-wing kid at all, it's more that we needed someone who was bright-eyed and bushy-tailed and innocent and fun,” said Neal. “They really had that kind of lightness to them and then could be taken somewhere else and challenged. And that's where we first met Roman. He was incredibly focused on Taika in that audition and that was really impressive too, and his concentration, which you obviously need when you are in almost every scene of the movie.”

Waititi capitalized on finding Davis by also casting the actor’s twin brothers, Hardy and Gilby, as Hitler Youth clones (who were then multiplied even more through movie magic). The visual gag wasn’t planned, but Waititi added it to the movie after seeing Davis’ family.

“His mom and Roman came out to Prague, but they've also got twins. It was the only way for them to keep the family together. We had these two Aryan-looking boys with us, and we just sort of thought, ‘Well, you know, they could be really part of this as well.,'" said Neal. "That’s one of the things that Taika's great at. A lot of things can happen in the moment. It's alive, you know? You have the room to just be able to be free and playful.”

In the end, seeing through the eyes of a child helps to reframe conditions many people have become inured to out of human resilience and desensitization.

“Taika has got a way of simplifying things down to show how adults behave and breaking down all of the systems that we build up that we consider to be normal and showing that they can be quite ridiculous or actually not great at all,” said Neal.