The uneasy farce of "Jojo Rabbit": Is there ever a good time for "wacky Nazi" satire?

Taika Waititi's controversial comedy "Jojo Rabbit" refuses to play it safe, even when it's not entirely successful 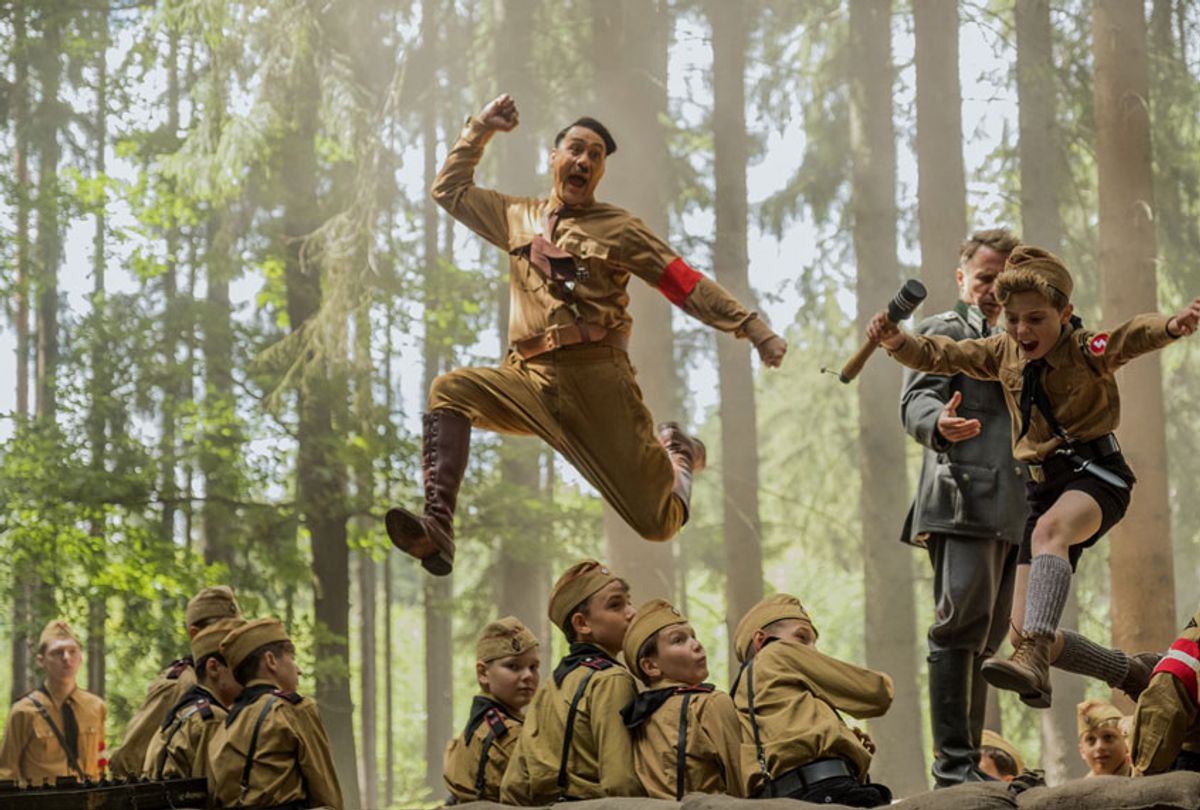 “It’s definitely not a good time to be a Nazi,” a baby-faced Hitler Youth drily observes in director Taika Waititi’s ambitious, polarizing coming-of-age epic “Jojo Rabbit.” Whether you find a line like that entertaining or not will likely tell you how you’ll regard the other hour and 47 minutes that surround it. Me? I laughed.

When “Jojo Rabbit,” based on Christine Leunens’ far more somber novel “Caging Skies,” debuted at the Toronto Film Festival last month, it earned the prestigious People’s Choice Award, historically an all but guaranteed indicator of an Oscar contender. Recent recipients have included “Green Book,” "Three Billboards Outside Ebbing, Missouri," “La La Land,” “Room” and “The Imitation Game.” But most of those didn’t involve Hitler, and none of them played him for yuks, catapulting “Jojo” into a uniquely hot take-generating position.

Since TIFF, critics have been scrambling over what to make of a story of a WWII-era German boy, his imaginary friend the Führer, and the Jewish girl (Thomasin McKenzie) he discovers hiding in his house. At stake in the verdict is not whether or not it’s cool to joke about Nazis, but whether “Jojo” is smart enough to pull it off.  Writing in The National Review, Armond White — who recently described “Parasite” as an "antifa comedy for the cancel-culture era" — was particularly aggrieved, calling “Jojo” an example of “naive Hollywood morality” and “a perfect allegory for Obama-era idolatry.” Variety, meanwhile, called it “the first hipster Nazi comedy,” a film that  can “get the audience to flatter itself for liking a movie that pretends to be audacious.” Ouch.

“Jojo” would no doubt be greeted quite differently had it come along at any other modern moment. But unfortunately for all of us living in 2019, its narrative of mass manipulation, misinformation, and the consequences of a reckless madman gaining political power feels nail-bitingly relevant. Right now, it can’t just be a satire of a foolish and tragic era. And that makes it undeniably uncomfortable and not always successful. It also makes it haunting, exhilarating, and often quite beautiful.

You shouldn’t need CliffsNotes to watch the movie, even if all you know going in to “Jojo” is “Nazis, from the director of ‘Thor: Ragnorok' and 'What We Do In the Shadows.'" But it did illuminate my experience knowing that it’s also from the director of 2010’s hidden gem “Boy,” another comedic drama about a child reconciling his fantasies of his father with the disappointing reality of him. And that in both cases, that larger than life parental figure was played by Waititi himself, who may be the first half-Jewish, half-Maori star in cinematic history to take on the role of Adolf Hitler.

If “Jojo” seems jarring at first, with its “Moonrise Kingdom” palette and daffy anachronisms (Hitler, a bit of a Fonzie, isn’t above a “Correctamundo” or two), it’s because it’s told through the unreliable eyes of an impressionable child. Ten-year-old Jojo’s (Roman Griffin Davis) father is away fighting the war; his older sister has passed away. Putting on a  uniform and engaging in a little group anti-Semitism feels like both a playacting adventure and a balm for his aching loneliness. When he first discovers Elsa, the teenage girl his mother (a vibrant Scarlett Johansson) has been secretly sheltering, she seems monstrous and witchy, her dark hair falling in her face and her long fingers plinking down the bannister. Because that's literally how he's been taught to view Jewish people.

Of course, things aren’t as they seem, but we know from history that Jojo isn’t alone in his delusions. The opening credits of the film make that clear, placing an upbeat German language version of “I Want to Hold Your Hand” with vintage footage of Hitler’s exuberant young fans. Then the shocking realities of the situation quickly become apparent, starting when the cheerleader Hitler of Jojo’s imagination is replaced with his sadistic scoutmasters, who demand he prove his mettle by strangling a rabbit.

From there, “Jojo” continues to proceed in its own alternately jokey, dreamy, horrifying way, as the war escalates and the child grows in his understanding of just what’s happening in his homeland. The laughs become interspersed with excruciating tension, like when a gestapo agent (Stephen Merchant, as menacing as he is genial) and his cronies drop by to search Jojo’s house, or as reassuring buddy Hitler begins to morph into dangerously unstable Hitler inside the boy’s mind.

Wringing humor and absurdity from the darkest of situations is a time-honored human response to unfathomable nightmares. Movies like “The Producers” and “Team America: World Police” took genocidal maniacs and successfully made them clowns. As Mel Brooks once observed, “The greatest comedy plays against the greatest tragedy. Comedy is a red rubber ball, and if you throw it against a soft, funny wall, it will not come back. But if you throw it against the hard wall of ultimate reality, it will bounce back and be very lively.”

Yet the worst comedies also try to hit that hard wall, where they just blow up like grenades. And nobody has a decisive vote on what constitutes a successful lob. Gilbert Gottfried’s notorious post 9/11 quip begat the phrase “too soon;” it also created a moment of exhalation in a city still reeling from an unimaginable loss. And what has every day for at least the last three years been if not a blend of astute late-night punchlines and stomach-dropping headlines?

What makes “Jojo” such a challenging film for right now is that — despite the headlines about its “wacky Nazis” — it never pretends to be a straightforward comedy. It refuses to grant its audience the cozy reassurance of pure satire. From the moment Jojo holds that rabbit in his small hands, we never forget that the specter of death is everywhere, waiting to pluck any character at any moment. (If the movie has any spiritual cousins, it's the horror comedy of films like "Get Out.”)

At its most basic level, “Jojo” is not a particularly original story. Its message, one that feels like hitting the side of barn in this day and age, is that it's easy to demonize a people, but it’s hard to do likewise for a single person. What sets it apart is just  that the notion isn’t presented in an easily digestible “Green Book” format here. The stakes for Jojo and Elsa are too high for that. And while the film often telegraphs its intentions and directions broadly, there nevertheless wasn’t a single rifle over its mantlepiece that didn’t make me gasp when it it inevitably fired.

Early on in “Jojo Rabbit,” Jojo and his mother are walking together on a sunshine-drenched day when they come up a trio of bodies strung up in the town square. Jojo turns away in youthful disgust, but his mother grabs his head firmly and forces him to look. That’s everything the film demands of us as well. You want the sunlight? Be prepared to look into the darkness. Laugh at buffoonery, yes, and cry over cruelty as well. Accept that they’re inexorably entwined. But don't look away. Not then. Not now. Not ever.

"Jojo Rabbit" is currently playing in theaters in New York and Los Angeles.