Massive blunder or true confession? White House chief of staff spells out Ukraine quid pro quo: "Get over it" 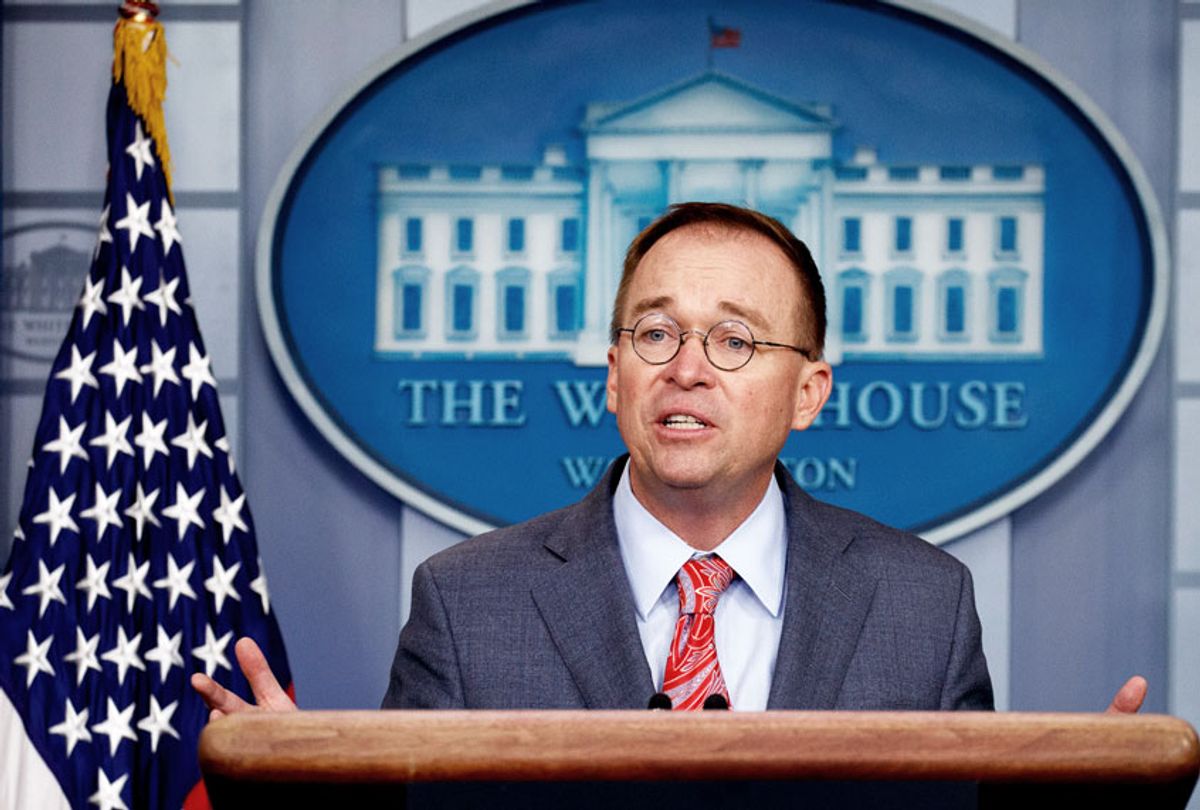 During a press briefing on Thursday, acting White House chief of staff Mick Mulvaney directly undercut President Trump’s claim that there was “no quid pro quo” in his effort to pressure Ukraine to investigate his political opponents.

Mulvaney admitted to reporters that the release of military aid to Ukraine was tied to Trump and Rudy Giuliani’s demands that the Ukrainian government investigate alleged "corruption" involving Democrats in the 2016 election.

“The look-back to what happened in 2016 certainly was part of the thing that [Trump] was worried about in corruption with that nation,” Mulvaney said, insisting that the president's action was “absolutely appropriate.”

Mulvaney said the aid to Ukraine was initially blocked because “everybody knows this is a corrupt place,” but that Trump had later cited what he believed to be Ukraine’s role in the 2016 election.

“Did he also mention to me in passing the corruption related to the DNC server? Absolutely. No question about that,” Mulvaney said. “But that’s it, and that’s why we held up the money.”

Mulvaney was referring to Trump’s debunked conspiracy theory that the Democratic National Committee's computer server, supposedly containing Hillary Clinton’s missing emails, was actually in possession of a Ukrainian company, which Trump has falsely claimed refused to grant the FBI access to its contents.

"To be clear, what you described is a quid pro quo,” a reporter told Mulvaney.

“We do that all the time,” Mulvaney claimed. “You’re saying the president of the U.S. can’t ask someone to help with an ongoing public investigation?”

“I have news for everybody: Get over it," he told reporters. “There’s going to be political influence in foreign policy.”

Despite effectively admitting to the “quid pro quo” that Trump has denied, Mulvaney claimed that “the money held up had absolutely nothing to do with [Joe] Biden.”

That was contradicted by the testimony of Gordon Sondland, the U.S. ambassador to the European Union, who told Congress on Thursday that there was “no quid pro quo” before revealing that Trump and Giuliani’s efforts in Ukraine “also included an effort to prompt the Ukrainians to investigate Vice President Biden or his son.”

Mulvaney’s comments also made clear that Trump wasn’t just looking for dirt on Biden. He also wanted to undercut the basis for the entire investigation into ties between his 2016 campaign and the Russian government.

The DNC server conspiracy Mulvaney referred to is premised on the idea that Russia never hacked the DNC servers at all. Instead, in this narrative, Democrats faked the hack on their own computer systems but were discovered by Seth Rich, a DNC staffer who was killed in a suspected attempted robbery. Trump supporters, including Fox News’ Sean Hannity, have sometimes pushed the conspiracy theory that Rich was killed because he learned of the nonexistent fraud. There is absolutely no evidence for any of these claims, which have been refuted by U.S. intelligence agencies and the Republican-led Senate Intelligence Committee.

Though Mulvaney made an effort to separate the search for an imaginary DNC server from the quest for dirt on Joe Biden, Giuliani made it clear in a Fox News interview that his search for the server led to the Biden conspiracy theory.

“The reality is I came about this by accident, investigating Ukrainian collusion with Democrats to affect the election,” Giuliani said at the time.

Democrats said on Thursday that Mulvaney’s startling admission would have significant consequences in their impeachment inquiry.

Rep. Eric Swalwell, D-Calif., who sits on both the Intelligence and Judiciary committees, went a step further. He told Politico that Mulvaney had effectively “co-signed the president’s confession,” adding that Trump has essentially “pleaded guilty” and all that was left was to determine the sentence.