E.U. ambassador throws Trump and Giuliani under the bus in testimony to impeachment investigators 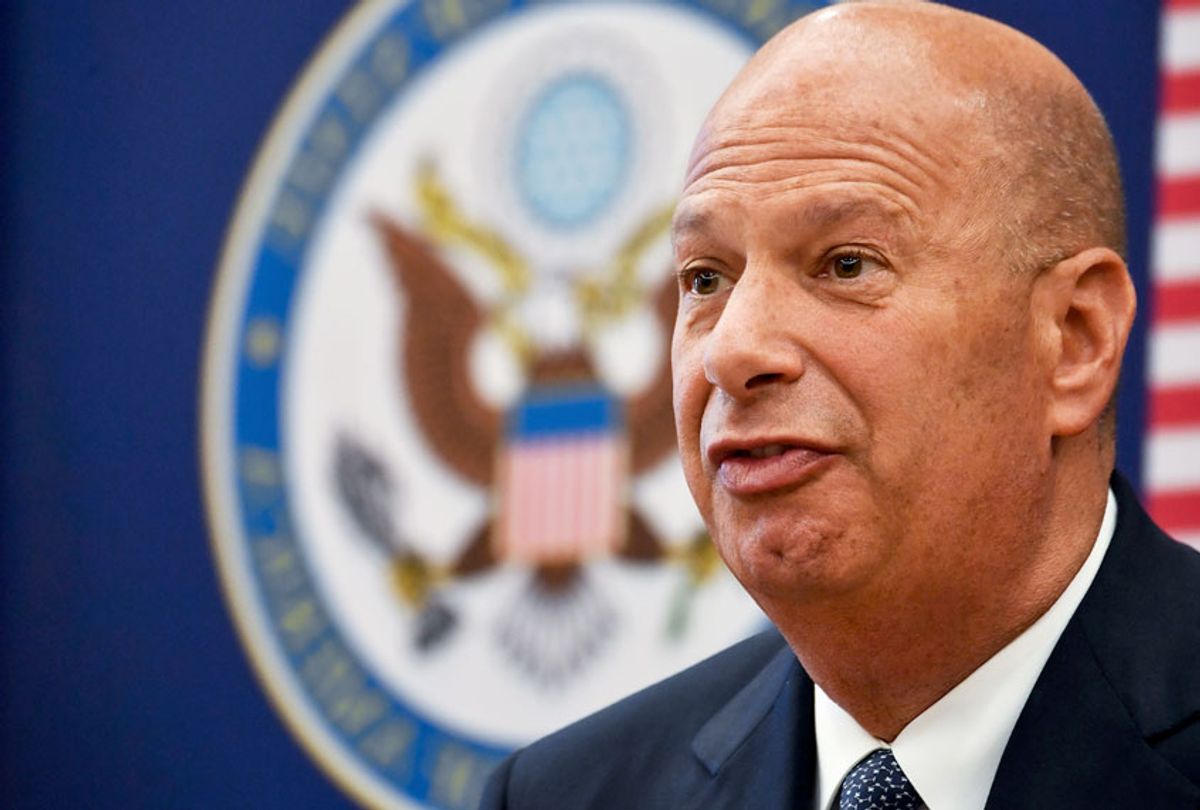 Gordon Sondland, the U.S. ambassador to the European Union, will tell House impeachment investigators in his opening statement that he disagreed with President Donald Trump's "direction" to conduct foreign policy with Ukraine through his personal attorney, Rudy Giuliani.

Sondland, the wealthy hotel developer who was appointed to his position after donating $1 million to Trump’s inauguration, has attempted to distance himself from the scandal that triggered the impeachment inquiry. He is featured heavily in text messages turned over to Congress, which show that other officials were concerned about Trump’s attempts to force Ukraine to investigate former Vice President Joe Biden and his son, Hunter.

Sondland, whose testimony was initially blocked by Secretary of State Mike Pompeo before he decided to testify under subpoena over the department’s objections, was set to tell Congress that any plot to pressure a foreign government to influence the election would have been “wrong,” according to a copy of his opening statement published by Politico.

“We were all disappointed by the president’s direction that we involve Mr. Giuliani,” he will say.

“I did not understand, until much later, that Mr. Giuliani’s agenda might have also included an effort to prompt the Ukrainians to investigate Vice President Biden or his son or to involve Ukrainians, directly or indirectly, in the president’s 2020 re-election campaign,” Sondland will claim.

Sondland’s statement comes after The Daily Beast reported that he and Giuliani urged Ukrainian President Volodymyr Zelensky to publicly announce an investigation into the Bidens. Sondland will tell Congress that he was merely acting on the president’s orders.

“Please know that I would not have recommended that Mr. Giuliani or any private citizen be involved in these foreign policy matters. However, given the president’s explicit direction, as well as the importance we attached to arranging a White House meeting between Presidents Trump and Zelensky, we agreed to do as President Trump directed,” the statement reads.

“Based on the president’s direction, we were faced with a choice: We could abandon the goal of a White House meeting for President Zelensky, which we all believed was crucial to strengthening U.S.-Ukrainian ties and furthering long-held U.S. foreign policy goals in the region," it continues. "Or we could do as President Trump directed and talk to Mr. Giuliani to address the President’s concerns."

The statement makes it clear that the meeting with Zelensky was preconditioned on Giuliani’s demand that Ukraine publicly vow to investigate “the 2016 election (including the DNC server) and Burisma as two anticorruption investigatory topics of importance for the President.”

Burisma is the Ukrainian firm whose board included Hunter Biden. No evidence of wrongdoing has been found to implicate either he or his father in wrongdoing.

Despite Sondland’s admitted involvement, he will claim that he “would not ever participate” in a plot to pressure a foreign government into affecting U.S. elections.

Sondland also faces questioning from House lawmakers Thursday. Among the issues Democrats planned to discuss is an NBC News report, which revealed that Sondland explicitly discussed Burisma with Ukrainian officials while negotiating with them about a meeting between Trump and Zelensky.

After then-national security advisor John Bolton was “noncommital” about the meeting, Sondland reportedly took Ukrainian officials aside to a private room in the White House basement, where he “directly contradicted” Bolton and told the Ukrainains that Trump was willing to meet on the precondition that Zelensky launch the investigation pressed for by Giuliani. Sondland was specifically heard discussing Burisma, prompting Bolton aide Fiona Hill to report the situation to White House lawyers. Hill testified in the impeachment inquiry last week.

Sondland landed in his highly influential position despite not having any diplomatic experience. Former federal employees told the Washington Post that Sondland quickly became “addicted” to the “adrenaline and ego boost” of being a senior U.S. official. According to The Post, Sondland ordered a $1 million renovation on his official residence that was "driven by Sondland's lavish tastes rather than practical needs." A source close to Sondland told The Post that the residence had "deteriorated and nearly unusable for representational purposes” even though sources with extensive knowledge of the residence called the claim “bullsh*t,” adding that the “house was in excellent condition.”

Hill testified to Congress that Sondland was woefully unqualified for the position, The New York Times reported, describing him as someone “driving in an unfamiliar place with no guardrails and no GPS.”

Hill testified that Sondland was so out of his depth in dealing with foreign leaders, The Times reported, that he posed a “potential national security risk.”