The conservatism of Bernie Sanders, Elizabeth Warren and Alexandria Ocasio-Cortez 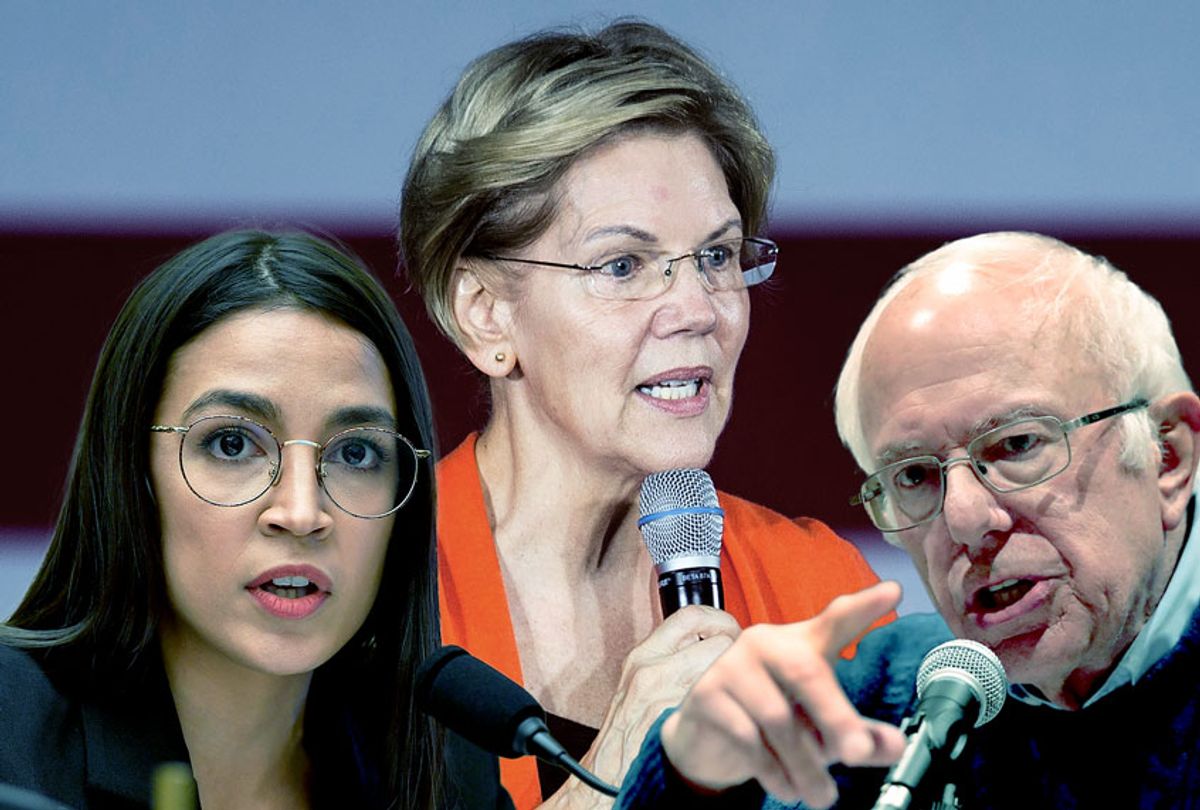 Everyone to the left of Attila the Hun is now a socialist radical, apparently. According to the increasingly debased and perverted language of contemporary American discourse, the “far left” includes people ranging from anarchist street protestors to the executive board members of multinational corporations that express support for LGBT rights or announce “Happy Holidays” in December.

The latest bromide — boring and obfuscating as always — is that mainstream American political figures, most especially presidential candidates Bernie Sanders and Elizabeth Warren, and the four young women in Congress known as “The Squad,” are fringe lunatics arguing on behalf of ideas that they cribbed from the diary of Vladimir Lenin.

Reality is consistently stubborn and subversive toward right wing propaganda. A cursory study of history, or a functional memory, indicates that Senators Sanders and Warren, and Rep. Alexandria Ocasio-Cortez (D-NY), along with her House colleagues Rashida Tlaib (D-Mich.), Ayanna Pressley (D-MA), and Ilhan Omar (D-MN), are merely trying to restore balance to the American experience — a balance that existed in such radical eras of the 1940s and ‘50s. The proposals of Warren and Sanders would make them moderates in most Western European countries, but they also reveal a streak of conservatism, if one of the ways to understand conservatism is the emphasis on the preservation of order in society, the imposition of limits and the respect for tradition in complicated, evolving societies.

Although the United States is slow to progress to the status of civilization that residents of counties like Canada, Japan and Australia take for granted, even among conservative circles, the social welfare state is not entirely foreign to American life. Similarly, ideas like Medicare for All, public universities with minimal or no tuition, and high tax rates on the wealthy are entirely faithful to the “good old days” that President Trump and his supporters seemingly long to resurrect.

After the creation of Medicaid and Medicare in 1965, the rate of uninsured Americans plummeted below 15 percent. Unsatisfied with the existence of any American without access to quality health care, President Richard Nixon — not exactly Eugene Debs — proposed a universal health care program that would have functioned as a federal policy offering a buy-in rate closely connected to personal income. The poor would pay no premiums, whereas working class families might pay a marginal fee. Decades before Nixon beautified the Oval Office with his presence, President Truman — another militant leftist — proposed a national health care program accessible to all citizens at no cost. In the 1990s, Senator Ted Kennedy cosponsored the legislation to create the State Children Health Insurance Program — not with a Democratic Socialist, but with Republican Senator Orrin Hatch.

No one bothered asking Nixon the predictable and unimaginative question, “How will you pay for it?” The top marginal tax rate during his presidency was 70 percent. When he was vice president to President Dwight Eisenhower, the top marginal rate was 91 percent. By some sacred intervention, the rich were able to survive this dark period of history. John Galt never went anywhere. Ayn Rand, unfortunately, wrote many books, and, despite progressive taxation, collected hefty royalty checks on the sales.

Advocates of debt free higher education face accusations of liberal delusion. Rather than the administrators of a hippie commune, Sanders, Warren, and others are as extreme in their ideology as every Republican governor who presided over their respective states and commonwealths, along with their public university systems, in the 1950s, ‘60s, and ‘70s. It was not until the 1980s that college tuition began its upward trajectory toward rates of highway robbery. Many state colleges in the middle of the 20th century charged no tuition, while many others had fees so low that students could pay semester-by-semester with the wages they earned in part time employment. The overwhelming majority of white male college students after the conclusion of World War II funded their studies with the GI bill, while white veterans who did not attend college used the government subsidy to buy their first homes.

For most of the postwar era, robust labor unions ensured that large amounts of full time workers received adequate pay for their work, using the power of collective bargaining and the threat of the strike to create conditions favorable to blue collar laborers, most of whom were low skilled and without advanced degrees. Organized labor barely exists in the private sector in 2019, leaving the debate on living wages in the hands of politicians, including those more concerned with maximizing executive compensation than fighting to guarantee that someone working 40 hours a week can afford to live in a single bedroom apartment.

The right wing, most especially Donald Trump, blusters about how illegal immigration — not corporate greed or the destruction of labor unions — is to blame for the stagnation of wages. They have convinced millions of voters that comprehensive immigration plans that include a “path to citizenship” are treasonous in theory and practice. Ronald Reagan, the patron saint of American conservatism, granted amnesty to three million undocumented immigrants while president of the United States.

Lazy journalists, milquetoast Democratic strategists, and citizens of curiosity and conscience should take note that the illuminative story of domestic politics is not how the prominence of Alexandria Ocasio-Cortez, or the popularity of Warren and Sanders, is proof that the Democratic Party has drifted off the edge of the “far left,” but that the far right has so thoroughly succeeded in moving the country’s political culture away from the center that the moderate policies of the 1970s now apparently resemble Fidel Castro’s revolutionary agenda.

A more helpful and truthful framework would instruct the electorate that the braver and more creative Democrats are making a valiant effort to return the United States to the more balanced and equitable policies of the past — policies that created the largest middle class in the history of the world. In other words, they are conservatives.