In failing to stand up to China, LeBron James and the NBA told us something about their priorities and values. 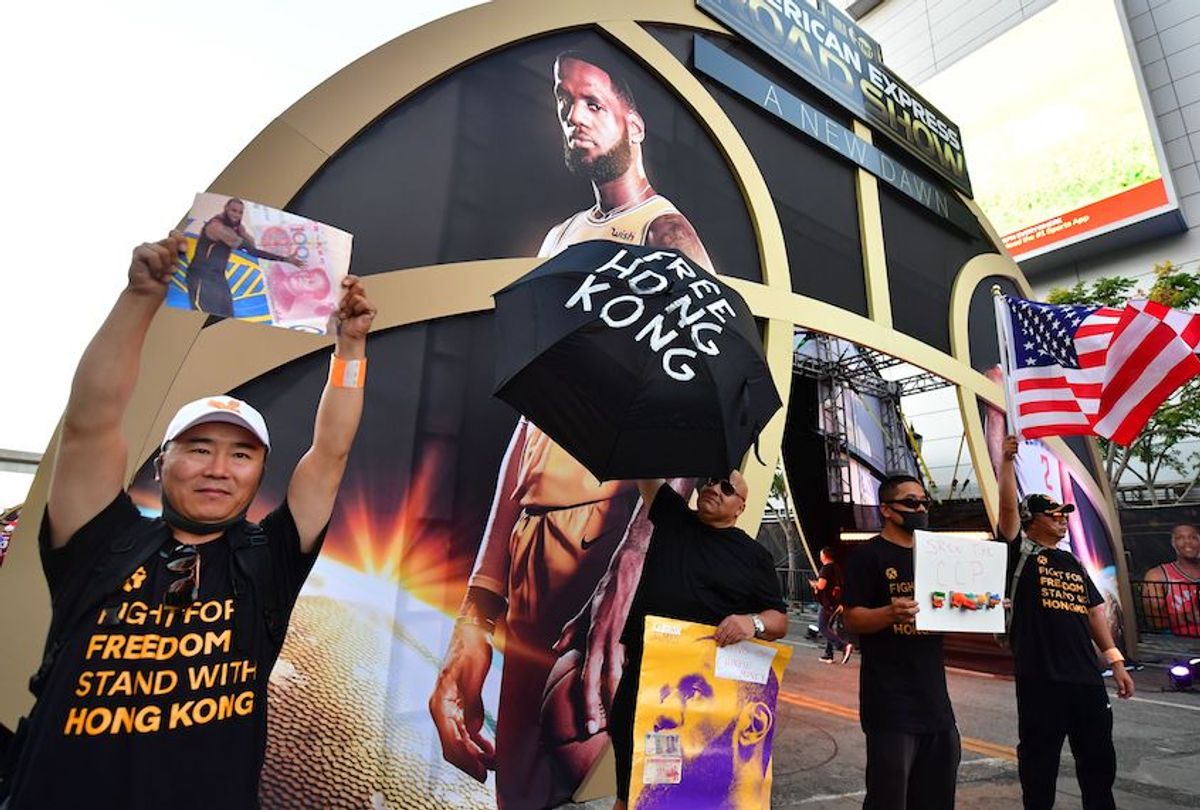 Hong Kong supporters protest outside Staples Center ahead of the Lakers vs Clippers NBA season opener in Los Angeles on October 22, 2019. - Activists handed out free T-shirts displaying support for the Hong Kong protests after an NBA fan in Northern California raised enough money to pay for more than 10,000 shirts, according to the organizer who goes by the pseudonym "Sun Lared" as LeBron James of the Lakers suffers the brunt of people's anger after comments he made in response to the tweet from Houston Rockets GM Daryl Morey in support of Hong Kong protesters, and drawing the ire of the Chinese Communist Pary. (Photo by Frederic J. BROWN / AFP) (Photo by FREDERIC J. BROWN/AFP via Getty Images) (Frederic J. Brown/AFP via Getty Images)
--

The ongoing protests in Hong Kong have captured the world’s attention. The protests began in June in response to a bill that would have allowed for the extradition of criminal suspects to mainland China, with a legal system characterized by arbitrary detention, unfair trial and torture.

Although Hong Kong chief executive Carrie Lam agreed to withdraw the bill, protests have continued and expanded. Protesters are now demanding, among other things, the implementation of complete universal suffrage.

While many around the world have expressed support for the protests in Hong Kong, one (quickly deleted) pro-democracy tweet in particular, from Houston Rockets General Manager Daryl Morey, has led to an unlikely international incident involving the government of China and the National Basketball Association (NBA). The incident has even managed to tarnish the reputation of basketball’s biggest star, LeBron James, in Hong Kong.

Most importantly, it’s also raised important questions on a systemic and personal level for many. On the big-picture level, it brings into question the appropriate balance between companies’ unending quest for profit and the need to uphold fundamental human rights. At the same time, it forces us to think about what an individual’s responsibility should be when given an opportunity to stand up against injustice.

The economic threat to the NBA

In the aftermath of an NBA general manager writing his tweet, the economic punishment from China on the NBA and the Rockets was swift. Yao Ming, president of the Chinese Basketball Association and a former Houston Rocket player, Tencent, China’s largest social media company and a media partner with ESPN, and Li Ning, a shoe company that has a business relationship with the NBA, have all announced plans to suspend their relationships with the Rockets and the NBA.

These attacks went straight to the NBA’s bottom line. The NBA relies heavily on these partnerships with China to grow its global business. It’s estimated that it earns US$4 billion annually from television deals, merchandise sales and sponsorships.

Without China, it’s highly unlikely that the NBA could have increased its salary caps (and thus players’ salaries) to a projected US$116 million per team for the 2020-21 season.

The confrontation with China complicates things. League sources say franchises are planning to deal with a situation in which salary caps could drop between 10 and 15 per cent. While China has backed down somewhat, allowing a previously planned exhibition game in Shanghai to proceed, the NBA’s experience stands as a cautionary tale for other businesses wanting to enter the Chinese market.

James told a group of reporters that Daryl Morey “wasn’t educated on the situation at hand” and that “so many people could have been harmed not only financially, but physically, emotionally, spiritually.”

On the one hand, it may be easy for media commentators to accuse James of hypocrisy. After all, James holds a lifetime deal with Nike valued at roughly $US1 billion, and Nike has a strong market presence in China. And his media production company, SpringHill Entertainment, is producing "Space Jam 2" which is expected to make big money in China.

But we also agree that being dismissive of protesters who are putting their lives on the line for democracy is disappointing given James’ civil-rights track record. In the apparent face of deep, personal financial interests, he didn’t stand up for a cause half a world away, and that’s a letdown.

It is, however, easy to criticize someone we’ll likely never meet. It’s more useful to consider a fundamental question: What’s the responsibility of internationally famous athletes, or any other well-known figure, to deal with global injustices?

Ali refused to fight in Vietnam

James may have fallen short, but we don’t lack for role models. Certainly, the great sporting human-rights activists have led by example. A lot of athletes understood that doing the right thing sometimes meant doing the hard, unprofitable thing.

Muhammad Ali was stripped of his boxing titles and banned from boxing at the height of his career because he refused to fight in Vietnam. African-American sprinters Tommie Smith and John Carlos suffered the consequences from an unforgiving society for their Black Power salute at the 1968 Olympics in support of the civil rights movement.

We also have examples of athletes who stood up against injustice, and paid the price, even when the fight had nothing to do with them. In doing so, they heeded the words of Martin Luther King Jr.: “Injustice anywhere is a threat to justice everywhere.”

Peter Norman, the white Australian who stood on the podium with Carlos and Smith wearing an Olympic Project for Human Rights pin in solidarity, was blacklisted from Australian sport and suffered significantly for his part in the protest. Australia’s parliament only apologized for the country’s treatment of him in 2012, six years after his death.

There’s a reason why we remember these names. It’s because protest is difficult. It sometimes demands sacrifices. But protest, or the lack of it, also reveals one’s priorities and values. In failing to stand up for the Hong Kong protesters, James and the NBA told us something about theirs.