The cult of Cheesecake Factory and its baffling, larger-than-life charms

A cultural survey of the much-derided restaurant, from "The Big Bang Theory" fakery to "Middle Class Fancy" love 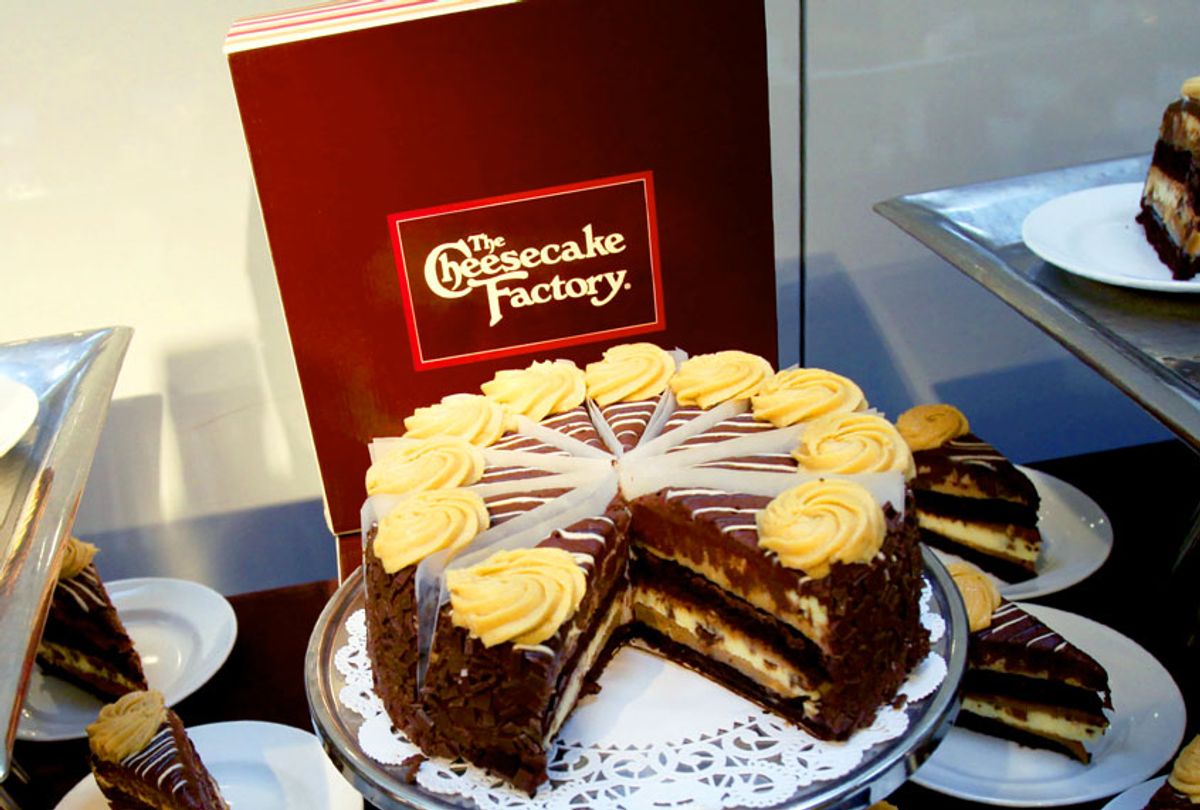 It’s a truth that occupies many message boards and subreddits dedicated to the show, the overwhelming consensus being that — without the opulent, faux-Ancient empire -meets-casino lobby accents — it looks more like a generic Denny’s.

In a 2012 interview with the Pittsburgh Post-Gazette, a representative from the restaurant said, “The Cheesecake Factory does not have any sort of arrangements with the show,” but that “the Cheesecake Factory is really pleased to be featured in such a funny & wildly popular show.” This makes the writers’ decision to include a sterilized version of the restaurant as a key location, one where the gang convenes and Penny and Bernadette both hold jobs at one point, an even odder one.

Whether you like it or not, the Cheesecake Factory is instantly-recognizable — iconic, you could say, despite the fact that our society is largely split on how it should be regarded.

I considered this the last time I was actually at a Cheesecake Factory. It was last March; I was in Washington, D.C. during a tremendous windstorm that grounded planes for days and left my face sore from windburn. The streets were mostly empty, save the rows of empty parked cars and branches that had snapped free from the London Plane trees lining the sidewalk. After trying and failing to get a flight out, I ended up at an Embassy Suites in Friendship Heights, located above a Metro stop and adjacent to a Cheesecake Factory.

While most of the other restaurants in the area had closed early, this Cheesecake Factory was bustling. There were the same people that seem to be at every location: the teenage girls who look like they're on their way to or from a school formal, toddling around in sequins and heels, pooling money to cover the bill; the new couple at the bar splitting a piece of cheesecake; the family whose table looks like it may break under the weight of six entrees and a shared appetizer. (Growing up in the suburban Midwest, I’d absolutely been all of these people at various points in my life.)

Then there were the people who, like me that day, had just come in off the street. While waiting for a seat at the bar, I eavesdropped on two men in their 20s, wearing nearly identical suits and loosened red power ties. “Man, I love this place,” one said to the other, his voice dripping with sarcasm. “Oh yeah,” his friend responded, “so classy.”

Unlike the fictional hangouts featured on other shows, in its 40-year existence, the Cheesecake Factory has developed an iconic, real-world reputation for being larger-than-life — from portion size to the decor (which was described by a Twitter user as a “post-modern hellscape”). And somewhere along the way, it developed into something of a punchline as well.

Regardless of how you view the restaurant now, it’s fair to say that its current form is very different than its origins as a family-owned cafe in Beverly Hills. In a 2018 interview with Thrillist, founder David Marshall Overton explained how, since the original location opened in 1978, the menu swelled from a one-pager of soups and salads to one that’s over 20 pages long with dishes like Tex Mex Eggrolls and Louisiana Chicken Pasta.

"I didn't want another restaurant to open down the block and take my business away,” he said. “We just kept putting things on the menu that people seemed to like. Finally, I thought, 'Well, there's nothing that America wants that we shouldn't be able to put on the menu.' So, we just kept at it.”

This aspect of the restaurant makes for an easy joke for late night hosts and daytime talk programs, Ellen Degeneres being one of the most recent to trot it out. In a June 2018 segment of the “The Ellen Show,” Degeneres tells audience members that she took her wife, Portia de Rossi, for dinner at the Cheesecake Factory, but was disturbed by the length of the menu.

“This is true,” she said, opening the segment. “They’re the only menus visible from space.”

But simultaneously, the Cheesecake Factory maintains a certain cult favorite status among celebrities including Steph Curry, Drake, the Kardashians, and Britney Spears. Meghan Trainor was once swarmed by fans in one; Kristin Cavallari reportedly spent five hours at the Factory when she was pregnant in 2012.

“Why are celebrities so obsessed with the goddamn Cheesecake Factory?” Splinter reporter Isha Aren asked in 2016. She didn’t find a single good answer.

“Cheesecake Factory delivers the exact opposite of the glamour we expect from our celebrities, who constantly pave the way for new diet trends and try to sell us their gourmet cookbooks,” she wrote. “It’s kind of nice that we plebs can truly connect with the rich and famous over these crappy dining choices and the horrific bowel movements that inevitably follow — there’s nothing more relatable than that.”

Then a few months ago, I was scrolling through Twitter and came across a meme captioned, “When someone asks you to go have dinner at The Cheesecake Factory and it's not even the weekend.” The photo shows a young blonde guy making the “OK” sign with his fingers, his speech bubble read: “Haha yeah ok sure I’ll pick you up in my Rolls Royce lol and maybe afterwards we can go hangout with my movie star friends haha.”

It came from the Middle Class Fancy account, which is where you’ll also find a consistent stream of content that pokes fun at restaurants that, like its name suggests, are solidly middle class — Chili’s, Olive Garden, TGI Fridays. Then there’s Cheesecake Factory, which is arguably the most expensive of the bunch.

Lee Ayers is the founder of Middle Class Fancy, which was acquired by Doing Things Media last year. He said that it's “just an exaggerated version of the people I grew up around” in his small Georgia hometown.

The answers mostly land in a non-committal space.“I’ve seen people dressed casual and dressed up,” one commenter said. Another responded with a helpful makeshift graphic: “McDonalds -> Most Chain Restaurant -> Cheesecake Factory -> Most Private Sit down Restaurants-> Fancy Restaurants.”

“Fancy is subjective,” another commenter wrote. “Sometimes my girlfriend and I dress up, sometimes we go in sweats. It also depends on the night.”

I think this response actually says the most about what Cheesecake Factory is — and who it’s for — in our current culture. With its massive menu, which spans culinary styles and calorie counts, and its decor that isn’t really indicative of any particular place in time, it’s a restaurant that is for everyone: celebrities, the middle class fancy, a group of sitcom scientists. It’s an idea that is reinforced on the restaurant's website: “We are an upscale, casual dining restaurant. Be comfortable and feel free to come as you are! Just come hungry!”