Trump goes after Obama as he takes victory lap over ISIS leader's death: "Should have gotten him"

"They'd been looking for him for a long time," Trump said while speaking to a law enforcement conference in Chicago 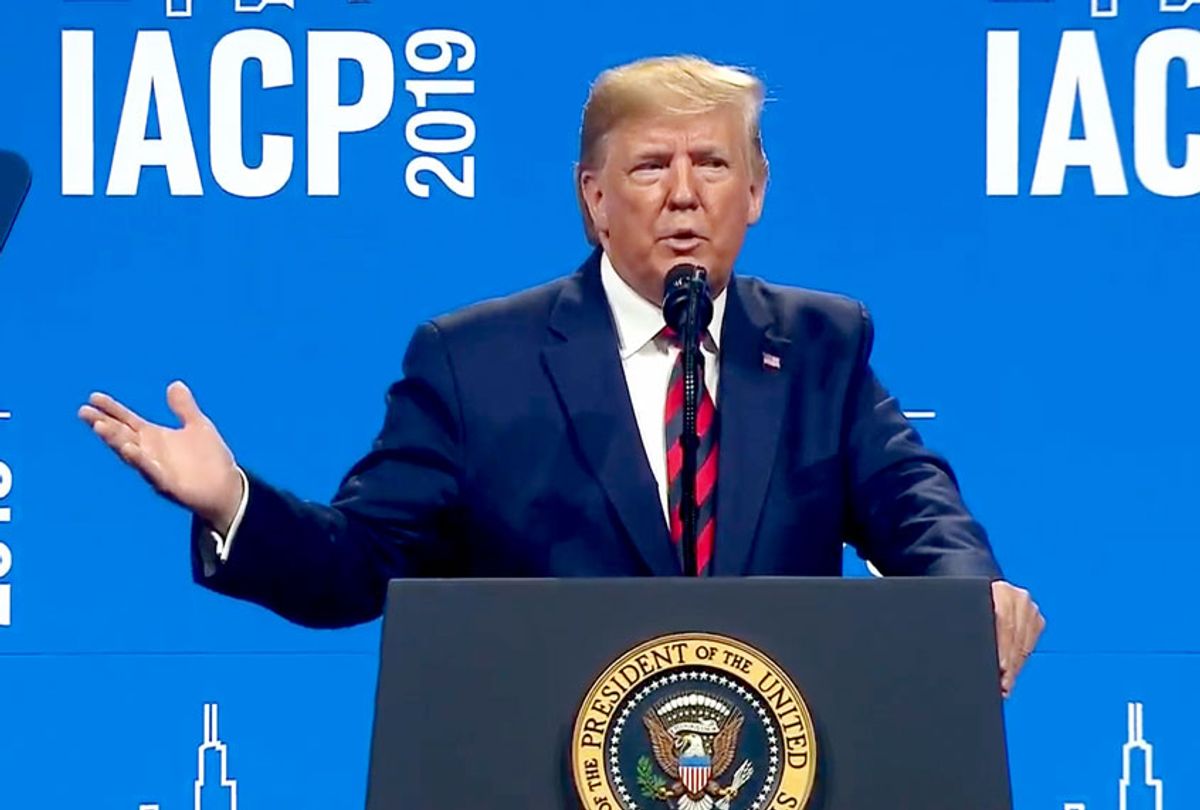 FOX NEWS LIVESTREAM: President Trump travels to Chicago for his first visit to the city since taking office. The president delivers remarks at the International Association of Chiefs of Police annual conference. (Fox News)
--

"They'd been looking for him for a long time. He was a sick and depraved man, and now he's dead," Trump said of al-Baghdadi while speaking at the annual International Association of Chiefs of Police conference Monday in Chicago.

"He's dead as a doornail," Trump continued, prompting laughter from the audience. "And he didn't die bravely either — I will tell you that."

Trump claimed that Baghdadi should have been killed "years ago," adding that it was "another president" who "should have gotten him."

The president further claimed that killing Baghdadi had been a top national security priority of his administration. He added that when officials would tell him of the deaths of other terrorists overseas, he would ask about the whereabouts of the ISIS leader.

"All the time, they'd walk into my office and say, 'Sir, we killed this leader at a low-level — this leader. And I'd say, 'I never heard of them. I want al-Baghdadi. That's the only one I know now. I want al-Baghadi. Get him.' And they got him," Trump said to applause from the crowd.

Before boarding Air Force One earlier on Monday, the president called the raid an "amazing display of intelligence and military power and coordination and getting along with people," adding that he was considering releasing video footage of it.

Trump touted the killing in tandem with an all-time S&P high, tweeting, "We are stronger than ever before, with GREAT upward potential. Enjoy!"

The news of Baghdadi's death could not have come at a better time for the president, who is facing an escalating impeachment inquiry in the House of Representatives and a growing divide among many Republicans over his decision to withdraw U.S. troops from Syria.

In announcing the U.S. military operation, Trump touted the triumph as a significant success for his administration and sought to silence critics of his unorthodox foreign policy decisions.

The president also claimed that the White House did not inform Democrats on Capitol Hill of the raid, because he was afraid they would leak the plans. (While Trump was not obligated to notify the Democratic leadership, his decision to exclude them from preparation raises concerns about his obligations under the National Security Act to keep Congress "fully and currently informed" about intelligence activities, including "significant anticipated intelligence activity.")

"We notified some. Others are being notified now as I speak," Trump said. "We were going to notify them last night, but we decided not to do that because Washington leaks like nothing I've ever seen before. There is no country in the world that leaks like we do. Washington is a leaking machine."

Though Trump kept Democrats in the dark about the raid, he did inform a number of top Republicans in advance — North Carolina Sen. Richard Burr, the chairman of the Senate Intelligence Committee, and South Carolina Sen. Lindsey Graham, who sits on the Senate Foreign Relations Committee.

Asked if he informed Speaker of the House Nancy Pelosi, D-Calif., one of the lawmakers leading the impeachment inquiry, Trump said, "I didn't do that. I wanted to make sure this was kept secret. I didn't want to have men lost — and women. I don't want to have people lost."

Trump said that he notified Russia in advance but claimed that he did so because the U.S. was "going over an area where they had a lot of firepower." He added that Russia did not know the purpose of the mission.

Pelosi criticized Trump on Sunday of informing Moscow before Democrats, while Senate Minority Leader Chuck Schumer, D-N.Y., said he learned about the death of Baghdadi after seeing it on television. Schumer called on the White House to provide a full briefing.