Benioff and Weiss out at "Star Wars," while "Game of Thrones" comments controversy continues

David Benioff and D. B. Weiss, the creators of the smash hit HBO series “Game of Thrones,” have quit “Star Wars" 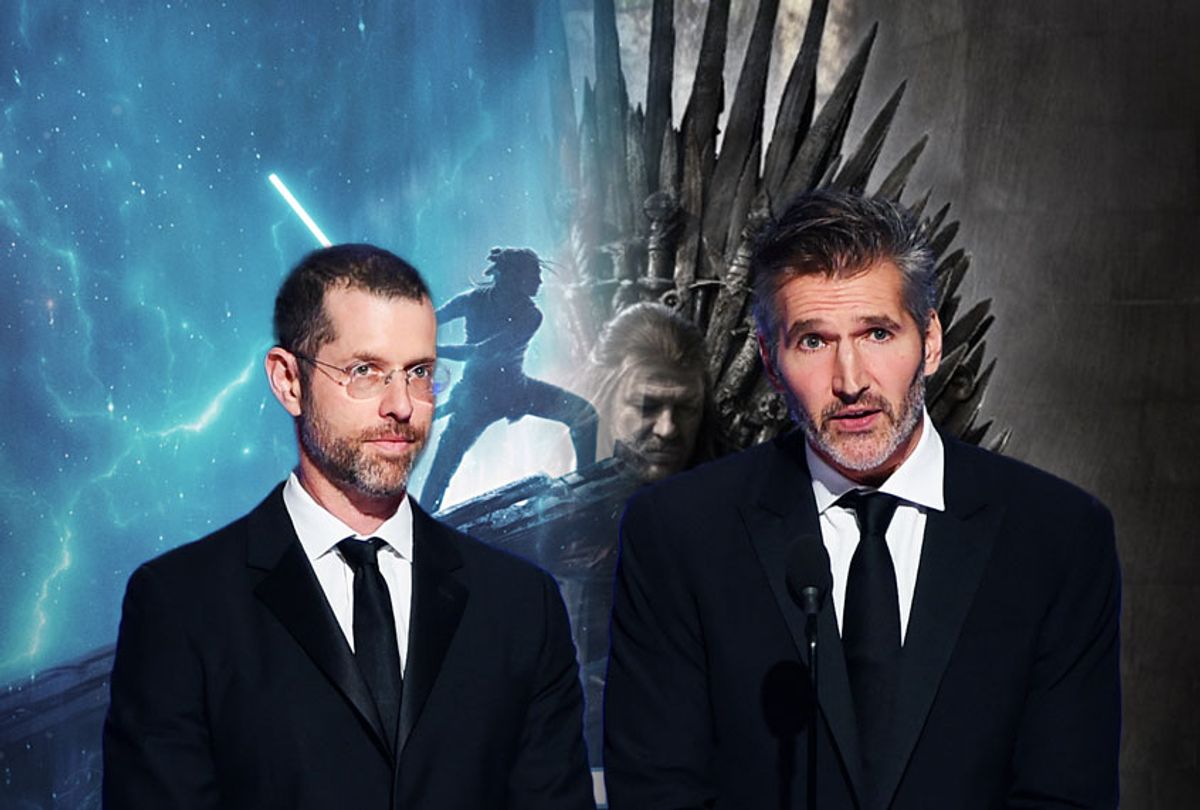 David Benioff and D. B. Weiss, the creators of the hit HBO series “Game of Thrones,” have pulled out of a planned “Star Wars” trilogy once scheduled to hit theaters in 2022.

"We love ‘Star Wars.’ When George Lucas built it, he built us too," the pair said in a statement to The Hollywood Reporter. "Getting to talk about ‘Star Wars’ with him and the current ‘Star Wars’ team was the thrill of a lifetime, and we will always be indebted to the saga that changed everything. But there are only so many hours in the day, and we felt we could not do justice to both ‘Star Wars’ and our Netflix projects. So we are regretfully stepping away."

The planned Benioff and Weiss reunion would have resulted in the first “Star Wars” film to be released in cinemas following “Star Wars: The Rise of Skywalker,” which hits theaters later this year. It was intended to be the beginning of a standalone trilogy, which would exist in the same “Star Wars” universe as the main nine films.

Questions about the ability of Benioff and Weiss to create a “Star Wars” trilogy first arose in August after the pair signed a $250 million deal with Netflix to create new content for them. In addition to queries over whether the team could juggle their Netflix and “Star Wars” responsibilities, Benioff and Weiss also faced a fan backlash due to the perceived poor quality of their final season of “Game of Thrones.”

“There is already a faction of ‘Star Wars’ fans who were unhappy with last two entries in that franchise — ‘The Last Jedi’ and ‘Solo: A Star Wars Story’ — because they felt the films strayed too far from what they originally liked about the series. So having Benioff and Weiss take over the franchise might further alienate many ‘Star Wars’ fans,” Barna William Donovan of the Department of Communication and Media Culture at Saint Peter’s University told CNBC in May.

While it is unclear if there is any connection between the two events, the announcement by Benioff and Weiss came as the pair held a controversial “Questions & Answers” session at the Austin Film Festival on Monday.

Both men acknowledged on stage that they were unprepared for “Game of Thrones,” with their comments documented on by Twitter user @ForArya. After they admitted that they did not have any “bona fides” when they met with author George R. R. Martin prior to starting the series, Benioff added they “don’t know why he trusted us with his life’s work.”

When they pitched the pilot, the pair decided to avoid discussing the story of the series, since “there was no good way to summarize the story.” They explained that they wrote all the episodes by themselves, because they “didn’t know any better.”

Benioff and Weiss also discussed how they made a number of errors when filming the pilot episode, including “basic writing mistakes” and others in casting and costume design. The pair also admitted that they allowed the actors to define their characters, since they often didn’t understand them. At one point, they needed to shoot a scene with King Robert Baratheon and Queen Cersei when they realized they had not yet filmed the two together onscreen.

Weiss ultimately described working on the series as being like “a ten year drunk party,” and both men discussed how they tried to strip the series of its fantasy elements to appeal to people like “mothers” and “NFL players.”