Another Pluto? What the discovery of a new dwarf planet means to astronomy

Hygiea isn't just a large asteroid after all! Here's how it compares to Pluto 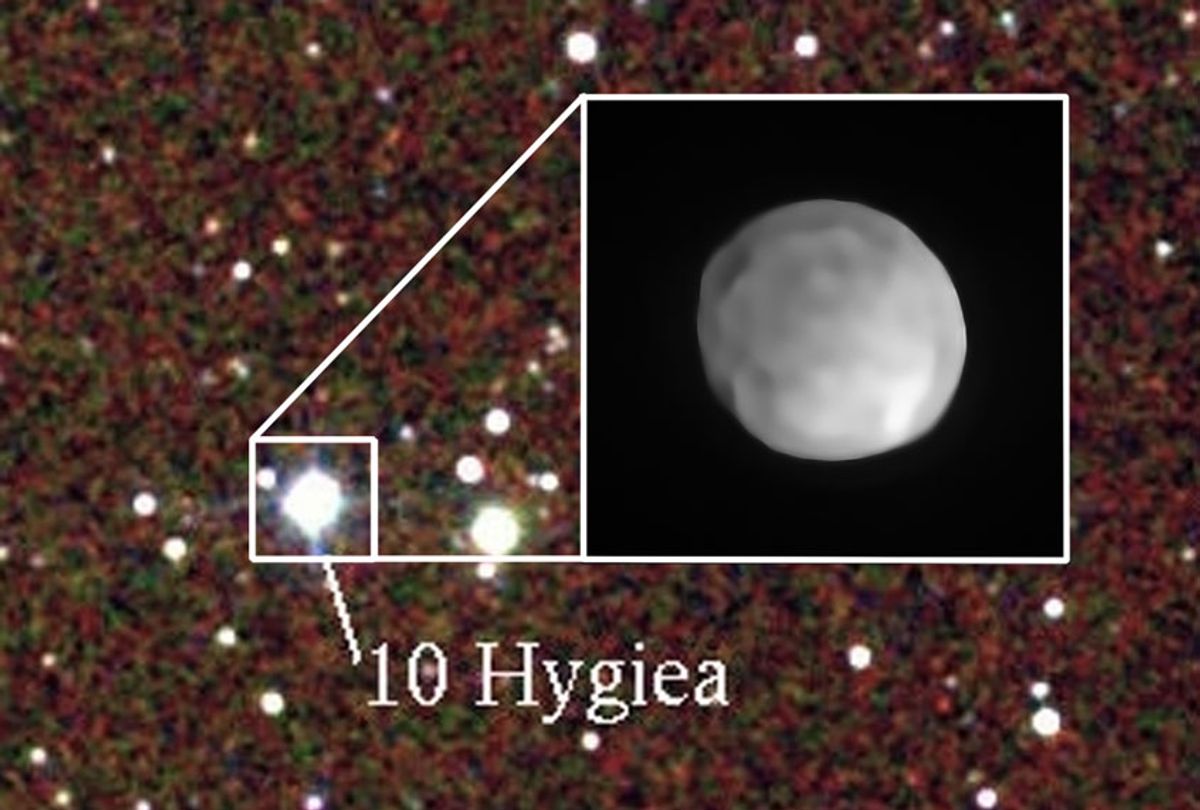 A new SPHERE/VLT image of Hygiea, which could be the Solar System’s smallest dwarf planet yet. As an object in the main asteroid belt, Hygiea satisfies right away three of the four requirements to be classified as a dwarf planet: it orbits around the Sun, it is not a moon and, unlike a planet, it has not cleared the neighbourhood around its orbit. The final requirement is that it have enough mass that its own gravity pulls it into a roughly spherical shape. This is what VLT observations have now revealed about Hygiea. (ESO/P. Vernazza et al./MISTRAL algorithm (ONERA/CNRS))
--

Ceres, Eris, Makemake, Haumea, and Pluto are expected to have a new friend, Hygiea, inducted into our solar system’s dwarf planet club. Hygiea was long believed to be a large asteroid in the asteroid belt, but has met all the requirements needed to become a dwarf planet thanks to new observations made by Chile’s Very Large Telescope (VLT).

The findings and new images that suggest Hygiea is actually a dwarf planet were published in Nature Astronomy by astronomer Pierre Vernazza of the Laboratoire d’Astrophysique de Marseille in France and his team of researchers.

“Thanks to the unique capability of the SPHERE instrument on the VLT, which is one of the most powerful imaging systems in the world, we could resolve Hygiea’s shape, which turns out to be nearly spherical,” Vernazza  said in a media statement. “Thanks to these images, Hygiea may be reclassified as a dwarf planet, so far the smallest in the Solar System.”

There are four key requirements that distinguish asteroids in the asteroid belt from dwarf planets, according to the International Astronomical Union: it must orbit the sun, it can’t be a moon, its orbital path can not be clear of debris, and it must have enough mass for its own gravity to pull it into a spherical shape. The last was proven by the latest research.

According to the observations, Hygiea is just over 267 miles in diameter. To put it in context, Pluto, which is the most famous dwarf planet, is roughly 1,491 miles in diameter. Hygiea would be the smallest dwarf planet with a rotation rate of around 13.8 hours. One surprising finding was that it lacked an impact crater. Hygiea is the main member of one of the largest asteroid families that originated from the same parent body. Astronomers believe that the family of nearly 7,000 asteroids was created by a large impact that sent debris from Hygiea into an asteroid swarm about two billion years ago. While Vernazza and his team identified two unambiguous craters, neither of them could have been caused by the impact.

“Neither of these two craters could have been caused by the impact that originated the Hygiea family of asteroids whose volume is comparable to that of a 100 km-sized object,” the study’s co-author Miroslav Brož of the Astronomical Institute of Charles University in Prague, Czech Republic., said in a media statement. “They are too small.”

The finding is an exciting one for astronomers all around the world.

“Any new evaluation of a major object in the Solar System is an exciting surprise. Hygiea has never been observed with sufficient resolution to infer its size and shape,” Avi Loeb, chair of Harvard's astronomy department, told Salon via email.

While Pluto is arguably the most famous dwarf planet, the main difference between it and Hygiea are their respective sizes and how spherical they are.

“Both objects are nearly spherical but Pluto is a more perfect sphere,” Loeb who heads Harvard's astronomy department said. “Hygeia deviates from a perfectly spherical shape by a fraction of a percent, whereas the non-sphericity of Pluto is 300 times smaller.”

Hygiea’s potential reclassification speaks to its gravitational pull, which is nothing new, but rather a result of new technology.

“Any object with enough self-gravity to pull itself into a spherical shape has the potential to be considered a ‘dwarf planet,’”Richard Binzel, Professor of Planetary Science at the Massachusetts Institute of Technology (MIT) told Salon in an email. “As we explore more and more objects in the asteroid belt and beyond, we are finding objects that surprise us. It's why we explore. Though perhaps it is no surprise, gravity usually wins.”

Indeed, this is a reminder to astronomers that there is much in our own solar system to be discovered. Currently, there are technically eight planets in our solar system. We used to believe there were nine until Pluto was reclassified to a dwarf planet. Mercury, Venus, Earth, Mars, Jupiter, Saturn, Uranus, and Neptune have cleared their orbits, so there is no risk they could be declassified from their planetary status.

“Pluto got demoted from a planet to a dwarf planet because there are thousands of objects in Pluto’s orbit (Kuiper Belt),” Sara Seager, Professor of Planetary Science, Physics and Aerospace Engineering at MIT, told Salon in an email.

However, it is possible that there is another planet like Earth and Mars relatively nearby that we don’t know about yet. As we have previously reported, there is an ongoing scientific debate over the existence of so-called Planet Nine, a distant, massive planet in our very own Solar System, which could contain more planets than the nine we are aware of.

“The main ongoing search is for Planet Nine which is thought (based on its gravitational effect on other objects) to have a mass larger by a factor of 5-10 than the Earth and an orbit that extends possibly a thousand times farther than the Earth-Sun separation,” Loeb said. “Because of the vast volume of the outer Solar System and the difficulty in detecting the faint glow that they exhibit by reflecting sunlight, there may be additional planets out there that we do not know about.”

As for the dwarf planets, astronomers say new technology will help more be discovered in the near future.

“Upcoming telescopes, like the James Webb Space Telescope (scheduled for launch in 2021), will be much more sensitive than existing telescopes to faint infrared sources, like dwarf planets in the outer Solar System, but it will need to be guided as to where to look,” Loeb said. “This guidance could be provided by the Large Synoptic Survey Telescope (LSST) which will start to survey the sky repeatedly next year.”