So we're supposed to treat Donald Trump with respect, after all this? Oh, hell no 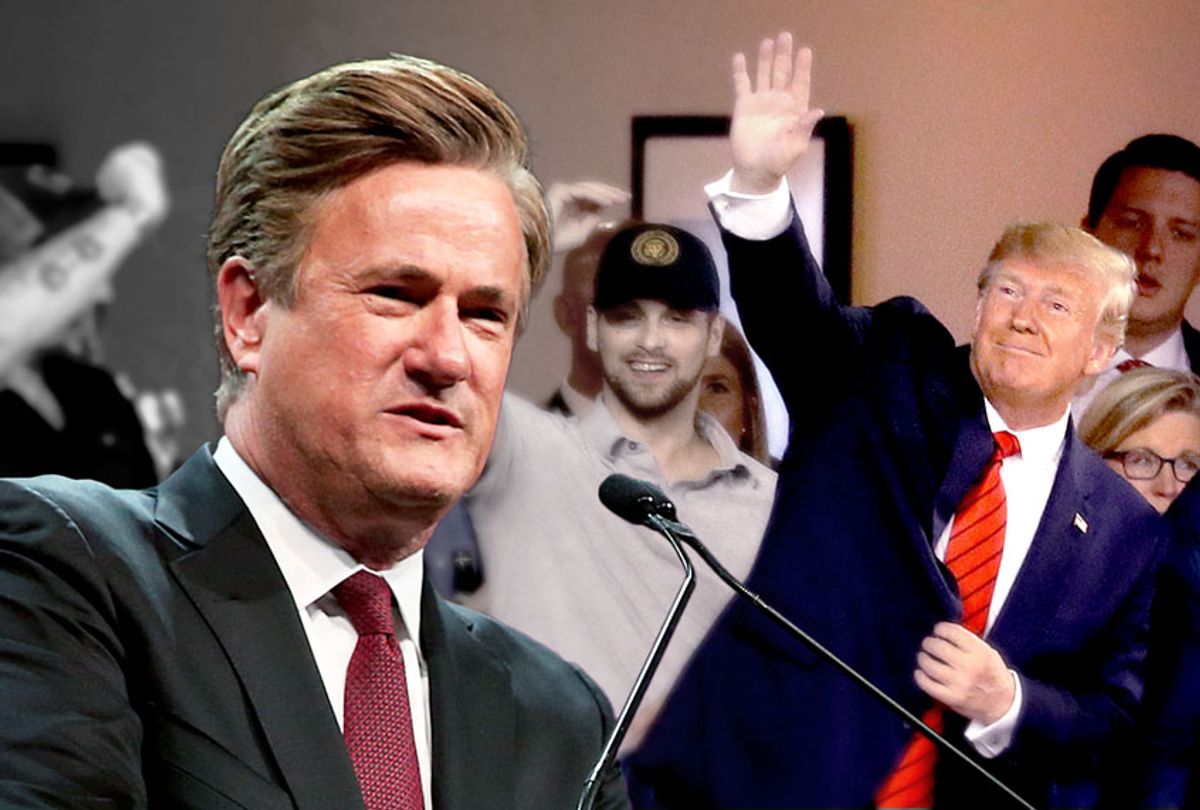 The last 36 hours have illustrated two horrible truths about this era. First, there are way too many Americans who still accept Donald Trump’s word as truth. Second, too many of us believe Trump deserves the presidential deference we usually reserve for normal times and normal chief executives.

Neither of those things is remotely acceptable.

When we first heard the news of the bombing raid that reportedly killed Abu Bakr al-Baghdadi, the news came from the president himself in the form of a public address from the White House. While it was entirely plausible that U.S. special forces finally zeroed in on the location of the Islamic State leader, hammering Idlib with firepower from a handful of Chinook helicopters, I justifiably refused to accept the news from Trump himself. None of us should have. Remarkably, though, given everything we know about the unrivaled mendacity of this president, journalists as well as observers at home believed him, at least for a while.

They shouldn’t have. He’s done nothing to earn that trust. With a track record of 13,435 lies so far, per the Washington Post, he’s earned nothing more than our perpetual and well-deserved distrust. Therefore our first reaction to anything that farts its way out of his mouth should be incredulity at best, irrespective of the topic’s degree of seriousness.

Unfortunately, scores of us haven’t learned this lesson yet. Throughout the morning on Sunday, there were countless reports being filed with papers from coast to coast, joined by social media posts, as though Trump’s word were suddenly good enough for us. Let's put it this way: any reportorial attribution that includes the phrase “according to Donald Trump” ought to be regarded as completely bogus until confirmed by independent sources.

As I observed the firehose of Syria news Sunday morning, I was baffled by how many people unthinkingly accepted his word as truth, knowing his copious track record of lies and scams. Later on, when independent corroboration came down, I was finally ready to accept that a mission to kill al-Baghdadi had taken place, but up until that point I felt a little like Charlton Heston screaming about “Soylent Green” to an oblivious population.

Just when I was ready to give up and move on to other things, reports emerged that maybe we weren’t hearing the truth from the White House after all, at least regarding some of the details.

A quick look at older news items about Syria reminded us that al-Baghdadi had been killed several other times in the past. In fact, on Sunday, the Kremlin released its own propaganda suggesting the ISIS leader hadn’t actually been killed in the weekend attack.

Likewise, Trump’s own description of the video he claimed to have watched “like a movie” also sounded like a Trump tall tale — the bizarre embellishments of an obvious liar. Indeed, late on Monday, NBC News reported that many of Trump’s details about the raid were inaccurate:

A few of those colorful details were wrong. Many of the rest were either highly classified or tactically sensitive, and their disclosure by the president made intelligence and military officials cringe, according to current and former U.S. officials. ...

The president said when U.S. officials notified Russia it would be entering airspace in western Syria, they told the Russians, "We think you're going to be very happy." But that phrase was not said on the call with the Russians, a U.S. official said.

On Monday, the chairman of the Joint Chiefs of Staff, Gen. Mark Milley, was asked by reporters how the president could possibly have known that al-Baghdadi was “whimpering and crying” before he died. Milley replied, “I don't know what the source of that was.”

To borrow one of Trump’s own bits: Sir! Your story was bullshit, sir!

There need to be consequences for a leader who serially lies to the people. First among them: our immediate distrust in the face of anything spoken or written by that leader, who has lied about everything from his inauguration crowd size to the contents of the Mueller report to the reasons for not releasing his tax returns (audits don’t preclude releasing the documents) to his “revival of manufacturing” (manufacturing has slipped into recession) to the existence of a unequivocal quid pro quo with Ukraine (which he confessed to before denying), and all points between. Oh, but he was telling the truth this time. Sure, OK.

Naturally, we should all expect Trump’s loyalists to offer full and unwavering acceptance of his deceit. It’s nuts, but it’s what they do. The Red Hat cult has been so thoroughly brainwashed as to believe that a professional scam artist, the architect of failed scams like Trump University, the Trump Foundation, and numerous financial scams, who operated as a well-known matchstick man in New York for 40 years, is the only national leader who’s telling the truth. It's literally everyone else who’s lying, rather than the crackpot who was developing a Trump Tower Moscow while emphatically denying it to his own cult members.

But the rest of us, the Normals, ought to know better than to buy anything from him. You don’t get to lie to the people with such breezy frequency and then whine and cry about how everyone’s being unfair for not believing your crapola.

To be clear: We have no choice but to better calibrate our skepticism in the face of a president who has done nothing to earn the benefit of the doubt.

Meanwhile, Donald Trump apparently deserves our respect and deference, too, which also happens to be unearned. At least that’s what we were told by professional scolds on Monday, the morning after the president was booed and mocked by 42,000 baseball fans in Washington during a World Series.

Yes, presidents deserve our respect, Senator. But not this one. The booing and chanting were anything but un-American, Joe. And, given this crisis, if the crowd had cheered enthusiastically for Trump, that would’ve been dangerous, Mika.

Our current president doesn’t even regard a majority of Americans as actual Americans, referring to the press as “enemies of the people,” to NeverTrump conservatives as “human scum,” and to the 58 percent of voters who oppose his despotic leadership as literal America-haters. As I exhaustively described here, he lies to the people on a routine basis, including to his own gullible fanboys. He behaves like a Third World tyrant: insisting he possesses absolute power, launching investigations into his political opponents and elevating foreign despots over his own people, while feloniously attempting to rig his own re-election.

What that World Series crowd actually illustrated was the power and fortitude of our democracy — in this country, we can engage in peaceful, spontaneous protests against the rising tide of authoritarian dictatorships (or, for that matter, against pretty much anything else). There was nothing violent about it. There was nothing undemocratic about it. In fact, what happened at the World Series should be happening — Hong Kong-style — at the White House, starting now.

One of the concerns that keeps me awake at night is that some members of the cable news media and even some members of the Democratic caucus don’t appear to fully grasp or take seriously the harrowing severity of the Trump crisis. The damage being inflicted upon the republic by Trump and his seedy mob of weirdo Batman villains will take years if not decades to repair.

These television and Capitol Hill apologists don’t appear to understand that, at any minute, Trump could repeat the same power grab we’ve seen by the likes of Vladimir Putin and others. They don’t appear to grasp that this president, through his loathsome toady Bill Barr, might attempt to arrest Barack Obama, Joe Biden, Hillary Clinton, James Comey and other alleged enemies of the state, via manufactured charges based on ludicrous Kremlin conspiracy theories.

They don’t appear to recognize, at the very least, how the slow normalization of the Mad King can easily lead to more tyrants in our future. They certainly don’t understand that a president, any president, should not be injecting his face into our living rooms 24/7, and that members of both parties are sick of his endless geyser of whiny grievances.

There are untold disasters awaiting us unless Trump is soon contained and removed from office. And even then, his own supporters — who are clearly unfamiliar with the remedies of the democratic process — have threatened a violent civil war if their messiah is convicted, resigns or loses the next election. Does anyone seriously believe Trump will leave office peacefully and willingly, like every departing chief executive who preceded him? After he eventually defies the Supreme Court, after he arrests his political rivals, will we be allowed to chant things at him then, Joe Scarborough?

This isn’t a game. This isn’t a reality show. It’s not a disposable drama for the consumption and regurgitation of cable news hosts. Not since the Civil War have we been this close to the dissolution of our constitutional norms, and possibly the cohesion of the republic itself. Until certain players fully embrace this reality, the reality of the Trump Crisis, we’ll never be able to CTRL-Z the dark ride of the Trump presidency — and we’ll never exorcise this cancer from our nation.