Republicans claim to "support the troops." Going back to JFK, McGovern and John Kerry, their true record is ugly 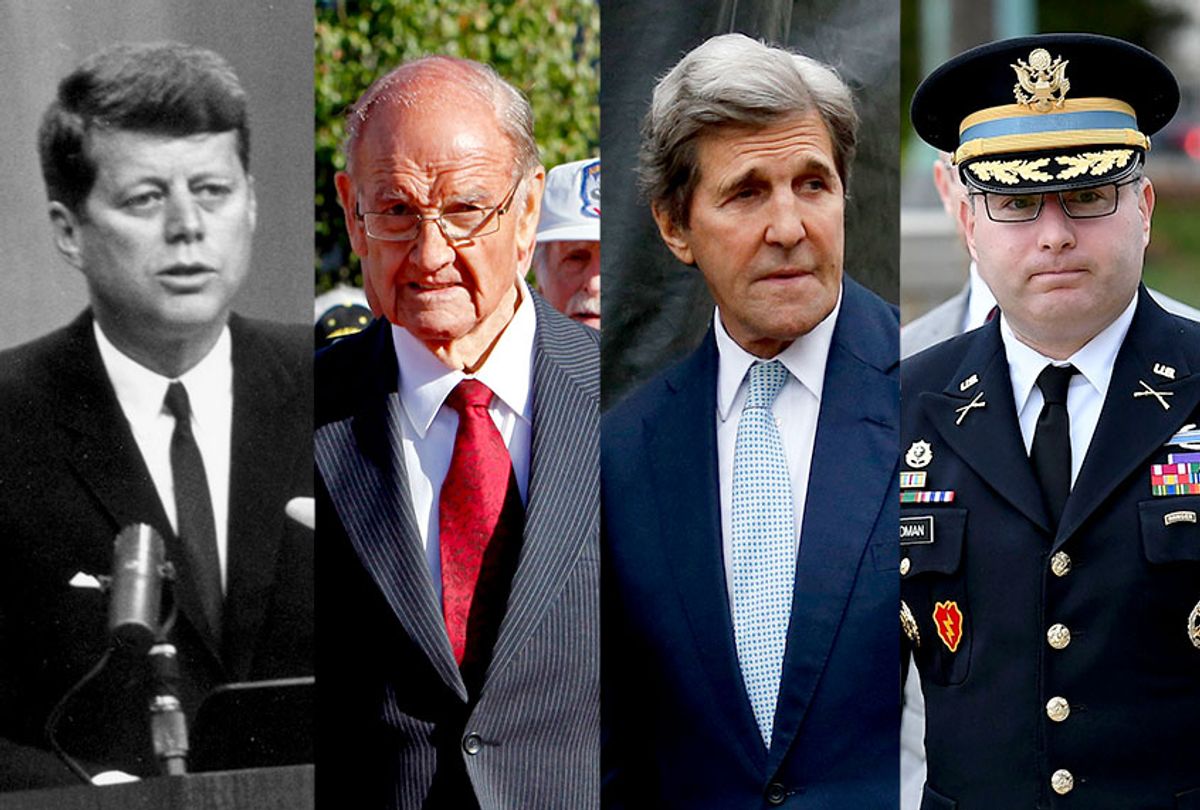 On Monday night when the New York Times reported the opening statement of Lt. Col. Alexander Vindman, the decorated Army combat veteran who was slated to give testimony before the House Intelligence Committee on Tuesday, I tweeted this:

I'm not a soothsayer so I was only half-serious, but sure enough within the hour this was on Fox News:

This line was clearly an official talking point since the next day similar language appeared again on Fox and on CNN:

Rudy Giuliani got in on the act as well:

Needless to say, this created a major controversy. Top Republicans, including Rep. Liz Cheney of Wyoming, Sen. John Thune of South Dakota, Sen. Mitt Romney of Utah and even Senate Majority Leader Mitch McConnell, all stepped forward to denounce these comments and declare Vindman a patriot. John Yoo even offered a mealy-mouthed "explanation" for his earlier comments on Facebook.

But let's not kid ourselves. The networks replayed those despicable smears dozens of times all day long as they reported the "backlash." As a political operative once said to me years ago when I gloated about a Republican flack having to "walk back" a statement she'd made earlier in the day: "She got it out there, didn't she?"

Among the punditocracy, it is an article of faith that Republicans are flag-waving guardians of the military, so many people expressed surprise that such a thing would have come from Fox News since, as the Washington Post's Eric Wemple wrote, "no network celebrates the troops as aggressively as Fox News."

NeverTrump Republicans, meanwhile, bemoaned the sad fate of their once patriotic party under Donald Trump:

Given this general consensus among the political class that this was a highly unusual attack on a decorated military man by the devoted patriots of the right, why did I immediately assume they would smear him? Well, because there's nothing at all unusual about it. Sure, conservatives love to wave the flag and claim the that they're the only true Americans, but history shows that their great love for the troops is as shallow as their respect for the Constitution.

Consider the most infamous Republican senator of the last century, Joseph McCarthy of Wisconsin, and his anti-communist crusade. People may not remember that McCarthy's most important target was none other than Gen. George Marshall, who was considered to be suspect by right-wingers because he "associated with traitors" when he developed the plan to rebuild Europe. As President Harry Truman's secretary of state and then secretary of defense, Marshall came under relentless attack by McCarthy and his accomplices. McCarthy once took to the Senate floor to deliver a 60,000-word diatribe accusing the decorated American hero of "a conspiracy on a scale so immense as to dwarf any previous such venture in the history of man."

One might have thought that Gen. Dwight Eisenhower, a Republican presidential candidate in 1952 — the year of that attack — would have stepped up to defend his fellow soldier. But it wasn't politically expedient. As the PBS series American Experience described it:

Eisenhower's personal and political instincts came into conflict during a campaign stop in McCarthy's home state of Wisconsin. Eisenhower was prepared to deliver a defense of Marshall, praising him "as a man and a soldier," and condemning the tactics of McCarthy as a "sobering lesson in the way freedom must not defend itself." But noble intentions gave way to political reality. Aware of McCarthy's huge base of support and not willing to risk losing votes in a crucial state, Eisenhower delivered his speech minus the defense of Marshall and the condemnation of McCarthy.

Those were the good old days when Republicans were virtuous and put the country first.

After attempting to destroy one of World War II's most distinguished generals, the Republicans homed in on another political rival with a heroic war record, Sen. John F. Kennedy of Massachusetts. Kennedy came from a famous family, of course, but his personal reputation was made during his naval career as the commander of a PT boat in the South Pacific that came under heavy enemy fire. Republicans started a whisper campaign suggesting that Kennedy would have been court-martialed for cowardice had he not been wealthy and well-connected, and those rumors dogged JFK throughout the 1960 presidential campaign.

That wasn't the last time Republicans trashed the reputation of a decorated veteran who happened to be a political opponent. Sen. George McGovern of South Dakota was denigrated as a coward and a Communist sympathizer when he ran for president in 1972 — and he had been an Air Force pilot who flew 35 bombing missions over Germany and Nazi-occupied Europe, earning the Distinguished Flying Cross and the Air Medal.

For more recent examples, we only have to look to the last decade when the GOP turned its smear machine onto Sen. Max Cleland of Georgia, who had lost both legs and one arm in Vietnam, winning both the Silver Star and Bronze Star for valor in combat. During the 2002 midterm elections, with the country reeling from 9/11 and the Republican Party riding high, Cleland's Republican challenger, Saxby Chambliss, ran a scurrilous ad associating Cleland with Osama bin Laden and saying he lacked "courage." The only prominent Republican who spoke out against that was Sen. John McCain, who said "I’ve never seen anything like that ad. It’s worse than disgraceful, it’s reprehensible." Cleland lost that race. Chambliss refused to apologize, even years later.

That brings us to the most famous example of Republicans trashing a war hero in recent history: the "swiftboating" of Sen. John Kerry during the 2004 presidential campaign. This was a highly sophisticated smear campaign, designed and implemented by conservative operatives and political strategists. Kerry was a Vietnam veteran running against George W. Bush, who had obtained a coveted spot in the Texas National Guard and never served overseas (while rarely showing up for duty), so Republicans set out to destroy Kerry's war record with lies. They even mocked his Purple Heart by passing out Band-aids at the Republican convention, a juvenile stunt that sowed the seeds of Donald Trump's denigration of a Republican Vietnam War hero, John McCain.

A couple of days ago I wrote about the Republican strategy to discredit the impeachment inquiry the same way they discredited the Mueller report. In their view that strategy was very successful since the report was seen as something of a dud, showing "no collusion, no obstruction" — although it showed that Trump had welcomed Russian help and obstructed justice at least 10 times. In order to pull that off again, Trump's boosters need to turn all the witnesses into liars and traitors and ensure that their base believes the entire impeachment process is a "witch hunt."  If anyone thinks attacking a decorated soldier was an anomaly because Republicans love the troops so much, they need to think again. This is something they do, over and over again, and it often works. As usual, Trump is only saying the quiet part out loud.