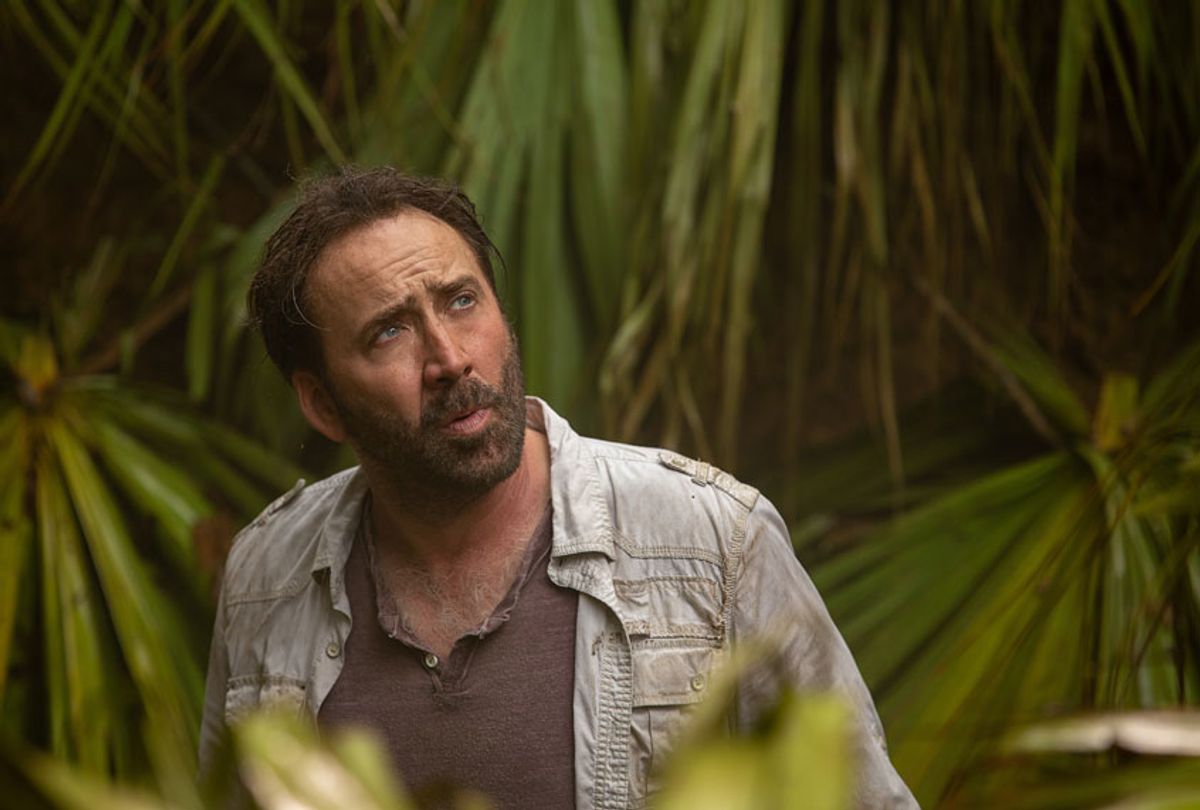 Actor Nicolas Cage first started teasing his upcoming film “Primal” last summer at the Shanghai International Film Festival, when he arrived armed with some unfinished footage and this plot summary.

“It's the story of a big game hunter, but he's not the kind of hunter who puts animals down,” Cage said. “He captures wild exotic animals and he sells them to zoos. He's trying to transport his animals to a zoo aboard a ship — I play this big game hunter — but lo and behold, on the ship along with me is a mercenary killer, a highly trained, extremely dangerous man.”

This dangerous man is a political assassin facing extradition to America. He lets all the animals on board loose, including a dangerous and rare white jaguar. Cage’s character has to retrieve them before they kill the other passengers, while also contending with the very real human threat.

It’s a wild, suspenseful action-thriller with some intensely quotable lines from Cage like, “If you kill my cat, I’ll blow your head off.” I spoke with the actor about his upcoming action film, "Primal."

This movie is an interesting update on the “hunter becomes the hunted” idea; I’m thinking of movies like “The Most Dangerous Game,” for example. Did you take refer to any of these films in preparation for “Primal”?

I have a recollection of Humphrey Bogart — that “African Queen” type of energy. Not that I could ever be Humphrey Bogart, but he was someone that I admired growing up and I like that kind of edge he always brought; it’s so timeless. So, when I do want to borrow from an actor that has had an influence on me, I try to go with the best. I thought about him a little. I was trying to get the movie again to watch it before I started filming "Primal." I didn’t manage to get that done, but it's somewhere in that impressionistic aspect of my imagination.

Your character in “Primal,” Frank Walsh, is a hunter and collector of rare and exotic animals, who bags a priceless white jaguar for a zoo. You’re a well-known collector of oddities in real life; did any of your real-world experiences or emotions surrounding those experiences inform your performance in this film?

I remember once when I was a child, I was attacked by a black cat. Just went at me. I was walking home, and this cat, it came out of nowhere and it was terrifying. Of course, this was just a small cat, I was probably 8 years old. But I definitely thought about that in my imagination when we’re being confronted by the jag in the movie, trying to recall those memories.

Well, it's interesting because you've also mentioned in past interviews about how animals have served as an inspiration for your acting. I had read an interview in which you talked about two cobras you used  to own and you were inspired by the way they move their backs before attacking. I feel like if there was to be a movie where you were going to take animalistic inspiration, this is it.

Absolutely, and that's a great observation. As you know, I’'m working with Kevin [Durand], who's not only a great actor, he's a lovely man — but he's a big man, and he's very careful with his strength.

But that being said, he's still big-boned, and I had a really pad up for those fight sequences. I thought to myself, "Well, what could I draw on that would even remotely keep me in a fight scene with this guy?" and I thought, "Frank should become the jag." You know, he has to access his inner jaguar and go wild, hopefully be scary and exhibit that feral ferocity; that was the only kind of strength that Frank had.

So I was thinking about the jag itself. I never got to work with a jag — that was obviously CGI — but thinking about my memories of cats, watching cats. Most of my experiences with cats have been really beautiful, but I was trying to draw something from that.

So regarding the fight sequences in "Primal" — you’ve described your acting style in the past as “Western Kabuki” —  operatic, larger-than-life. Meanwhile, much of the action in “Primal” takes place on a kind of cramped, crowded ship. How do you manage to stay true to that style while navigating some of the confined spaces you had to film in?

Well, the confined spaces actually helped with that because those days we were exhausted. We were filming in Puerto Rico shortly after the tragedy of the hurricane, so that was still in the air ,and it was hot. And then I’m working with Kevin, and we talked about his physical prowess, so it didn’t take much to access the imagination and apply it to the environment and hopefully make it something that felt authentic, particularly in the fight sequences.

Did you enjoy the fight sequences?

Ha! I don’t know  don't know that I could say I say I enjoyed them. It was hot, it was uncomfortable. I had to really pad up. When we would do certain scenes, my forearm started to feel like it was going to fall off, but I would say they were experiences that were certainly cathartic and hopefully, you know, enjoyable for the kind of movie it is, which is meant to be, you know, adventure and entertaining.

So were there scenes from “Primal” that were particularly fun to film?

The main reason why I did the movie was to work again with Nick [Powell, director]. He's someone I enjoyed working with on ["Outcast"], which we were both unhappy with the way it was deployed and ultimately taken away from us.

So I wanted to collaborate with him again, because he's so good — not only with choreography; he's also great with character. Everything on set with Nick, I felt was really enjoyable. So I don't want to say that the fight scenes were not fun, per se. It's just that we try to make it as authentic as possible so that the audience would feel some sort of sense of suspense and tension.

"Primal" will open in select theaters and be available on demand on Friday, Nov. 8.