So far Republicans have avoided answering direct questions about Trump's conduct. Time for press to push back 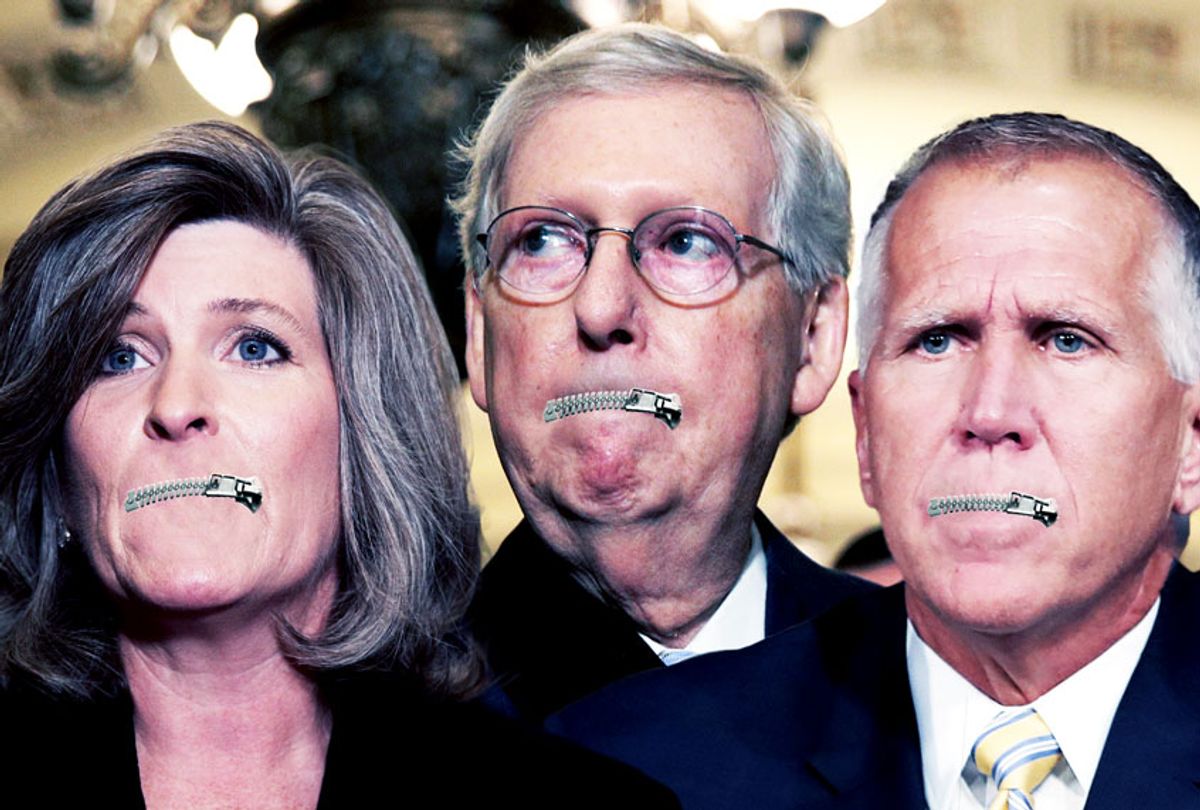 Political journalists have long been used to getting “answers” from public officials and candidates that have little or nothing to do with their questions.

Standard operating procedure in Washington is to pivot away from uncomfortable questions and turn to shopworn talking points instead.

And all too often, reporters will take the responses they get — I won’t call them answers — and do their best to make them look like news. It’s a classic example of journalistic timidity.

But with the impeachment process now at full throttle and every day bringing more evidence that makes Donald Trump’s abuse of power harder to deny without sounding insane, political journalists have suddenly realized that the refusal by Republican officials to answer their questions actually is the news.

Senate Majority Leader Mitch McConnell went to extraordinary lengths Tuesday to avoid giving substantive answers to direct questions about the allegations made by Army Lt. Col. Alexander Vindman, the first current White House official to testify in the House impeachment inquiry about President Donald Trump's controversial call with the Ukrainian President that is at the heart of the probe.

And Barrett didn’t just quote the non-answers, he quoted the question — because that was the most important part:

"Concerning Col. Vindman's testimony, what he heard on the President's call, that conversation with the Ukrainian leader was so concerning that he worried it might undermine US national security. Does it concern you? Are you worried about the President's behavior at all?"

Barrett then described how McConnell “answered a different question, one that was never asked, about charges from some of Trump's supporters that Vindman might not be patriotic because he was born in Ukraine.” McConnell also “shifted topics,” suggested an alternate story and, when asked once again, finally said he wasn’t going to comment. Here’s the video of the news conference.

Several GOP senators running for reelection are also running away from what would seem to be a straight-forward question: Is it appropriate for President Donald Trump to ask a foreign government to investigate his political opponent?

Rather than answering directly, Republican after Republican has sidestepped the question, contending the matter has to be investigated first — even though Trump himself said publicly on the south lawn of the White House that Ukraine and China should investigate Vice President Joe Biden and his son, Hunter.

But to Senate Republicans, particularly ones who need Trump's support to win difficult reelections, that admission is simply not enough.

CNN sent reporters and cameras crews to ask key GOP senators during the two-week congressional recess, and it paid off.

North Carolina Sen. Thom Tillis told CNN: “I'm going to leave it to the President to make that decision."

"We're going to have to wait and see what happens once it goes to the Senate Intelligence Committee," said Iowa Sen. Joni Ernst. Here’s that video:

And on Oct. 10, Sen. Rand Paul’s question-ducking made the news. Here he is on "CBS This Morning" with Anthony Mason:

Exposing these Republican officials’ refusal to publicly answer simple questions shows they lack the courage of their convictions. So that’s good journalism.

But some reporters continue to allow them to anonymously express views they’re too afraid to stand behind.

Just this week, a whole article in the Washington Post by Robert Costa and Philip Rucker was about how Republican senators are realy feeling — based on things they were only willing to say if granted anonymity:

Republican senators are lost and adrift as the impeachment inquiry enters its second month, navigating the grave threat to President Trump largely in the dark, frustrated by the absence of a credible case to defend his conduct and anxious about the historic reckoning that likely awaits them …

In hushed conversations over the past week, GOP senators lamented that the fast-expanding probe is fraying their party, which remains completely in Trump’s grip. They voiced exasperation at the expectation that they defend the president against the troublesome picture that has been painted, with neither convincing arguments from the White House nor confidence that something worse won’t soon be discovered.

“It feels like a horror movie,” said one veteran Republican senator, who spoke on the condition of anonymity to candidly describe the consensus.

The real news there was not how these Republican senators feel deep inside, it was how that contrasts with their dissembling and lies in public. The story should have led with the fact that based on off-the-record interviews with Republican senators, it was clear that their public statements have zero credibility.

But the Post article barely even noted in passing that all but three of the senators had signed onto Sen. Lindsey Graham’s resolution condemning the House’s impeachment inquiry as “illegitimate.” Instead, the reporters gave them cover — and even an excuse:

For now, Trump’s near-absolute control over his party’s base makes it difficult for Republicans to do anything but cheer him or be uneasy in the shadows, even though polls show that a majority of Americans disapprove of his job performance.

They reported, without even noting the profound underlying dishonesty:

People close to Mr. Trump said that the coming weeks will be marked by an increased assault on the integrity of the inquiry itself as the White House tries to avoid litigating the facts of what took place between Ukrainian officials and Mr. Trump’s loyalists, including Rudolph W. Giuliani, his personal lawyer.

They didn’t call attention to the extraordinary cynicism their sources were displaying, and indeed didn't seem aware of it:

Privately, White House officials concede they are losing the messaging battle with Democrats, whose inquiry has produced a series of devastating revelations about allegations that the president and his allies conducted a campaign to pressure Ukraine for his own political gain.

NYU journalism professor Jay Rosen tweeted: “A ‘messaging battle?’ Is that what this is? Just another political fight with tactics, optics and messages.”

David Graham, writing in the Atlantic, predicted that Republican will eventually have to stop hiding and choose to take a stand.

The silence of the overwhelming majority of Republicans has been one of the signatures of Trump’s Washington. ...

The time for avoidance, however, is coming to an end. Sooner or later, the vote on Capitol Hill will be called, and every single member of Congress will have to say once and for all whether they stand with Trump or against him.