Looking back at the legacy of the man who created “the most deformed bond market in history.” 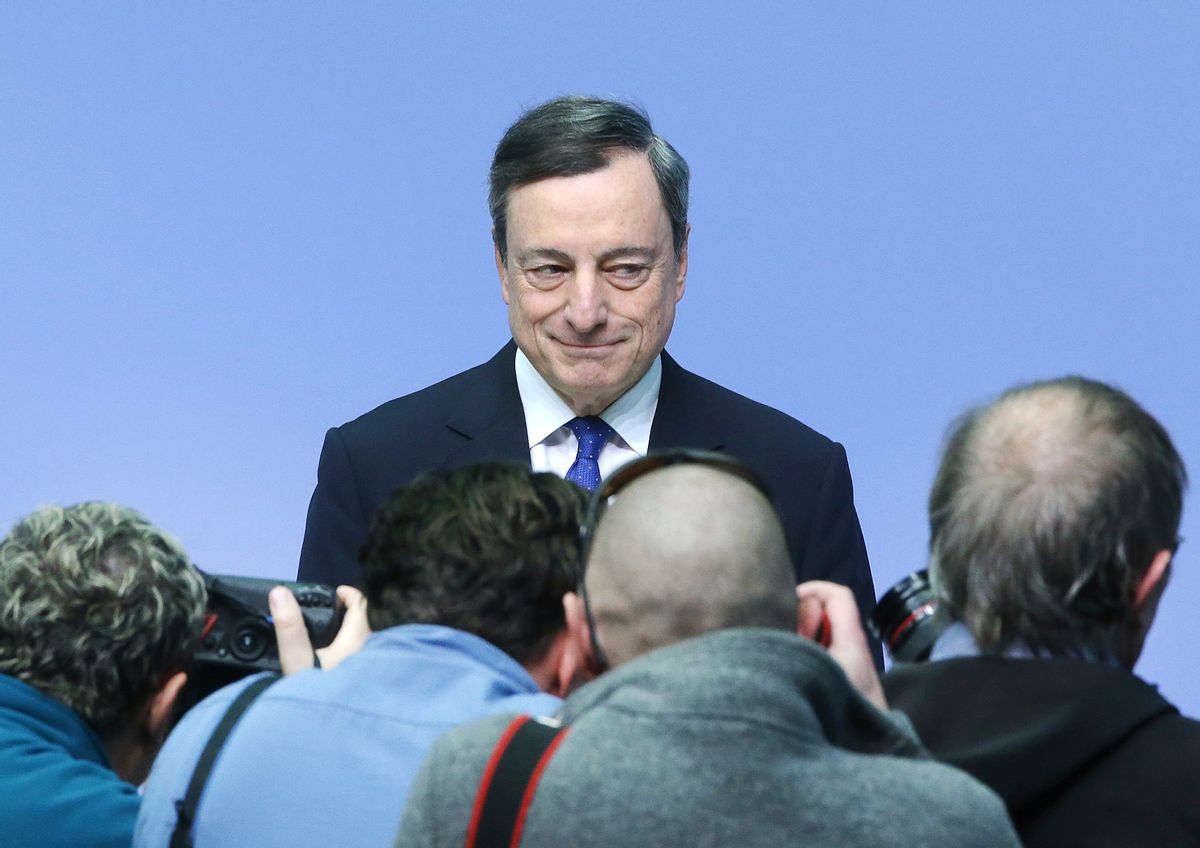 President of the European Central Bank Mario Draghi poses for photographers prior to a news conference in Frankfurt, Germany, Thursday, March 9, 2017, following a meeting of the ECB governing council. (AP Photo/Michael Probst) (AP)
--

Mario Draghi ends his term as president of the European Central Bank (ECB) at the end of October. He will do so as the most consequential head of the ECB since the euro’s inception. By substantially expanding the role of the central bank, Draghi likely saved the eurozone from implosion. But much like the preservation of the Bashar al-Assad regime in Syria, it’s still unclear whether the preservation of the single-currency union was a worthwhile objective, or simply perpetuated a profoundly flawed system that created misery for millions.

In many respects, Draghi’s actions were akin to adding additional floors onto a structure with a poor foundation, violating the safety codes while doing so, even as he provided more living space so that the building could become marginally habitable. But in so doing, his actions have contributed to huge socioeconomic costs and, in the words of Fritz W. Scharpf, former director of the Max Planck Institute for the Study of Societies, “also had the effect of ‘destroying the democratic legitimacy of government.’” What happens next is likely to provoke three possible outcomes: 1) the EU agrees to let member nations redevelop national sub-currencies that could balance economic issues; 2) the national debts held by EU nations could be merged to produce a supranational treasury that would sustain a huge credit; 3) or, in the absence of those two policies, dithering could produce weakened legitimacy that could initiate a collapse of the European Union project itself.

Let’s take a step back: Since inception, there have been two related problems in the Eurozone. One is the solvency issue (i.e., the individual countries can theoretically go bust, even Germany, because they are functionally like a Canadian province or U.S. state—they use the currency, but they don’t create it). Draghi basically solved the insolvency problem with his quantitative easing program, because as the issuer of the euro, the ECB was the only institution that could credibly backstop the national sovereign bonds and prevent a default. That’s why yield spreads compressed so dramatically and national borrowing costs plunged.

As successful as this measure became, it came at a great cost. The ECB would only step in to underwrite the bonds and thereby guarantee national solvency on condition that the recipient country carried out spending cuts. In effect, the right hand stole from the left hand, as the austerity measures simply exacerbated the problem of poor consumer and business demand and forced the governments concerned to issue yet more national debt. In fairness to Draghi, the austerity conditionality was probably crucial to securing a buy-in from Europe’s central economic players in Germany; Bundesbank officials were concerned about the so-called “free rider” problem, in which hitherto profligate governments would be rewarded with low interest credit, without having sound financial controls. Absent the Berlin acquiescence, the markets would have likely dismissed the Draghi pledge.

In this regard, “Super Mario” was almost too successful. His actions created a kind of moral hazard run amok in the Eurozone bond markets. The most vivid illustration of this phenomenon is the recent bizarre phenomenon of negative yields, in which certain sovereign countries, such as Germany, have actually been paid by creditors for the “privilege” of holding their paper. This in turn has created huge financial pressures among, for example, German financial institutions, such as banks, and national pension funds. How can they pay out income to their depositors, or annuities to their retirees, if these institutions are being charged for holding German bunds which, by law, they are required to buy? In the words of Ambrose Evans-Pritchard, the international business editor of the Daily Telegraph, Mario Draghi has created “the most deformed bond market in history… [and] has jumped from the frying pan into the freezer.”

The demand problem has remained even more problematic: the Eurozone has long had a case of insufficient demand (especially in long-suffering Mediterranean nations, such as Greece, Italy, Portugal and Spain, but now extending into Germany itself). This is a fiscal problem, but as noted previously, there is no “United States of Europe” treasury, so the individual Eurozone countries are still left to their own devices on spending decisions.

As the EU currency is divorced from each member state’s fiscal authorities, however, there are multiple components that create significant budget austerity pressures. One is the presence of the Stability and Growth Pact that arbitrarily sets borrowing and spending limits (with threatened financial penalties for those serial offenders who persistently refuse to comply with the rules). The second problem is directly related to euro’s weird supranational status: by agreeing to exchange their national currencies for the euro (a currency only issued by the ECB, not the national central banks), all single-currency members have relinquished their public sector’s capacity to provide high levels of employment and output. Like American states, these countries are limited in their ability to spend by taxation and bond revenues, and the markets can effectively shut them down if fiscal policy is deemed by them to be financially unsustainable. Market participants simply stop buying the bonds, yields skyrocket and bankruptcy becomes a real possibility. This is precisely what happened before Draghi’s “whatever it takes” speech seven years ago and the so-called “PIIGS crisis” was at its peak. The problem of demand paradoxically was exacerbated by the “resolution” of the solvency issue, which created a third pressure in favor of budget austerity. Countries “saved” by the ECB were like hobbled wrecks, whose legs were broken every time they tried to stand on their own two feet. They survived, but at what cost?

It is true that the decision of these countries to swap their national currencies for the euro took place well before Draghi took on the top job at the ECB, although he certainly played an active role during the early 1990s at the Italian treasury in order to ensure that Rome acquiesced to the rigid conditions of entry. As reported in Market Watch, according to European Union historians Kenneth Dyson and Kevin Featherstone, “Mario Draghi, currently president of the European Central Bank and then director general of the Italian treasury, ‘believed in his soul’ that the euro would enforce the discipline Italian governments needed.”

One man’s discipline is another man’s needless austerity obsession. “Super Mario” saw the euro as a means of breaking the country from its so-called addiction to fiscal profligacy, which is an economic way of describing national autonomy. During his time at the Italian treasury, questions have also been raised about Draghi’s role in a mysterious currency swap that took place between Italy and JP Morgan, just before the country joined the European Union’s Economic and Monetary Union. The swap allegedly helped the Italian government to secretly borrow billions and thereby enabled it to cook its books in advance of formal entry into the Eurozone. It is precisely this cavalier approach to legality that has long characterized the economic culture of the ECB (indeed, the European Union as a whole), despite its repeated (and often hypocritical) insistence on wayward countries adhering to a rules-based order. Draghi’s tenure as ECB president has done much to expand the central bank’s remit into legally questionable activities.

And at what cost? Much of the continent is blighted by a lost generation of youth, who have never experienced anything remotely approaching secure, full-time employment or economic security. Double-digit unemployment is still rife in many parts of the EU, along with rising inequality, mounting political strife, and a revival of nationalist tensions, the elimination of which was supposedly the primary political aim of the “European ideal,” when the community was first envisaged in the aftermath of World War II. So diminished is the trust between the Eurozone member states that there is virtually no appetite for a full-on move to a “United States of Europe” fiscal authority, if the rise of intensely nationalist populist parties in France, Italy, Belgium, Hungary and Poland is anything to go by. In the past, I have likened the current scenario to Yugoslavia, prior to its dissolution in the early 1990s:

“The relatively rich republics of Yugoslavia (Slovenia and Croatia) resented policies that transferred of wealth to the relatively poorer republics, like Serbia, Macedonia, Montenegro, or the autonomous region of Kosovo. Once Tito’s organizing genius disappeared, the linkages stitching the country together became frayed and eventually snapped as old grievances manifested themselves in newer forms. The same type of evolution could happen to the European Union if it underwent a supranational fiscal union, where the rich countries feel they are being unfairly burdened—the beginnings of which are already in evidence.”

It may have created significant financial dislocation (as well as put him out of a job), but surely a better option for Draghi would have been to admit that monetary unions, absent an accompanying fiscal union, could never work. That was certainly the historic experience during the initial phase of American national independence under the Articles of Confederation, a union characterized by a weak central taxing authority and comparable squabbling amongst the original 13 colonies regarding the settlement of state debts and competing land claims. Instead of building on that weak structure, the entire articles were ultimately scrapped at the Constitutional Convention, during which a new Constitution was established that provided for a much stronger federal government by establishing a strong executive branch, national courts, and centralized taxing powers.

In an ideal world, Draghi and others would have made the case for coordinated action to reintroduce national currencies and immediately require all tax and other public contractual obligations within the nation to be denominated in that currency so as to create demand for these currencies. The problem, of course, is that Draghi was ultimately a prisoner of the austerity illusion against which he now rails in his dying hours as ECB president, belatedly understanding that monetary policy has finally reached a dead end. In the end, Not-So-Super Mario was a man fooled by the austerity illusion… and a man willing to engage in the necessary cavalier policies of a central banker tasked with begetting a fiscal umbilical cord to the EU to fill a huge institutional hole that was never his to fill in the first place.