Paula White, the personal pastor of President Trump, joins the White House in an official capacity 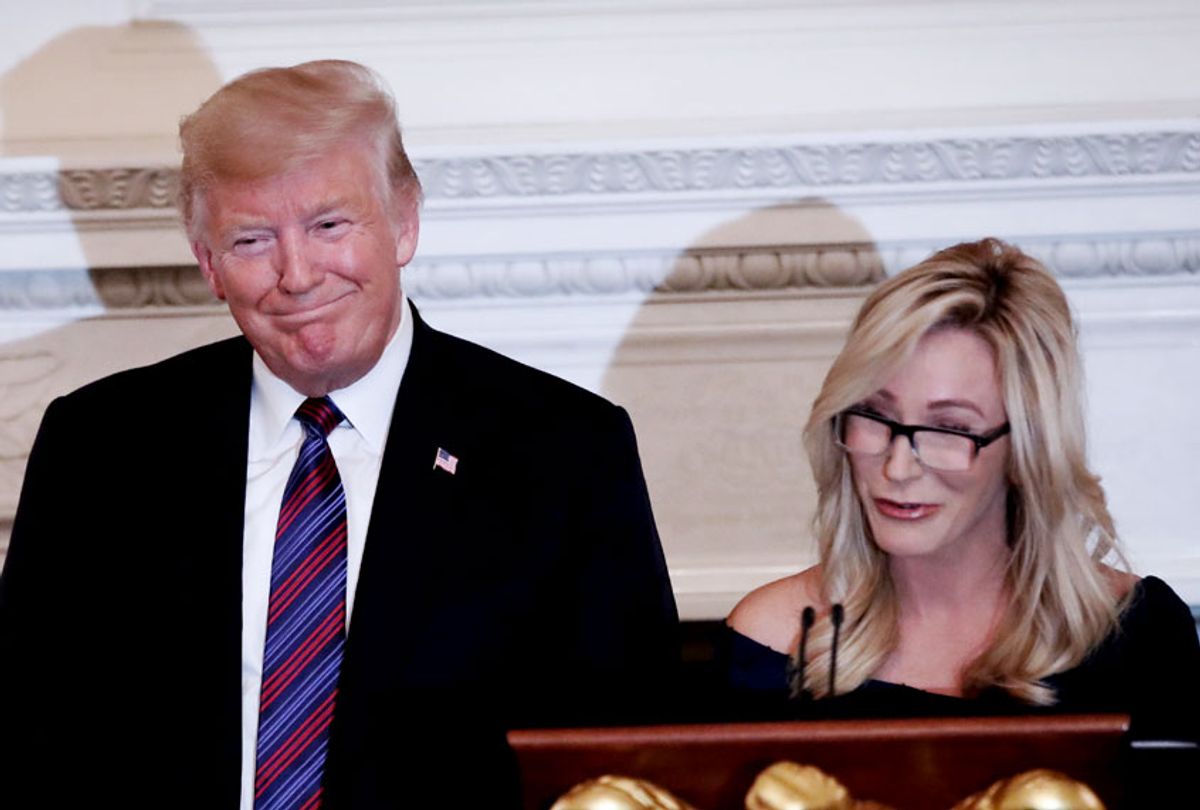 President Donald Trump smiles as pastor Paula White prepares to lead the room in prayer, during a dinner for evangelical leaders in the State Dining Room of the White House, Monday, Aug. 27, 2018, in Washington. () (AP Photo/Alex Brandon)
--

Paula White, the Florida-based televangelist who is the personal pastor of President Donald Trump, has joined the White House in an official capacity, according to the New York Times.

White, who has known the president since 2002 and who has visited 1600 Pennsylvania Avenue several times, will work in the Office of Public Liaison, the division of the White House overseeing outreach to groups and coalitions organizing key parts of the president's base. Her specific role will be to advise the administration's Faith and Opportunity initiative, which Trump established last year by executive order. It aims to boost the voice of faith-based groups in government programs focusing on issues like religious liberty, fighting poverty and strengthening marriage and the family.

The move comes as Trump campaigns for a second term and looks to maintain support from the religious conservatives who voted overwhelmingly for him in 2016, The Times noted.

Trump has taken many steps to ensure that evangelical Christians turn out for him again — by issuing executive orders, making Cabinet appointments and nominating federal judges approved by the religious right. Despite his actions, White is a controversial figure, and her presence in the top-tier of Trump's circle of informal religious advisers has long been a source of contention with many evangelical Christians.

White, a 53-year-old Evangelist who is married to Journey keyboardist Jonathan Cain, has a large following among Christians who believe in the controversial "prosperity gospel," which teaches that God blesses true believers with wealth, good health and material goods. White and other prosperity gospel preachers were investigated by the Senate in 2007 for allegedly participating in shady fundraising practices under the guise of religion. The inquiry ended in 2011 without reaching any conclusions.

Nevertheless, White, whose appointment is likely to cause friction with the religious right, has remained in good standing with Trump, who invited her to deliver the invocation at his inauguration and an opening prayer before his 2020 reelection campaign kickoff rally.

In a recent interview with the New York Post to promote her new book, White spoke favorably of the president and said she sometimes visits the White House several times a week.

"He's in total control," she told the newspaper. "He's not at all impulsive — he's so far ahead of everyone, very much a strategic thinker."