R.E.M.’s “Monster” and the legacy of an unsung melancholic masterpiece

After 25 years, the follow-up to “Automatic for the People” still holds a complex, elusive emotional timbre 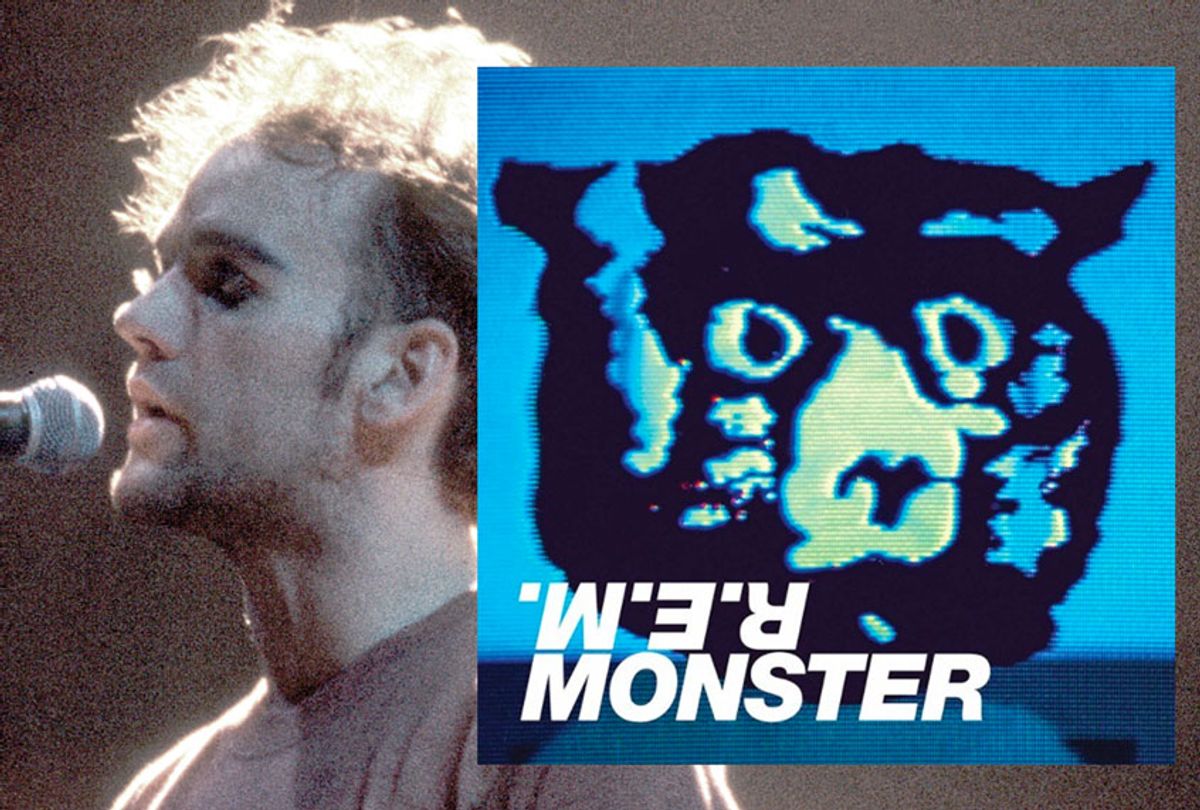 Grief is a finicky thing. One moment, it can be all-encompassing, its power bringing you to your knees. At other times, it's a dull ache — a low-level, buzzing hum in your mental background causing distraction. Grief can be quiet and mournful; it can be loud and antagonistic. And, perhaps most perniciously, grief is an amorphous, unpredictable thing: It can shapeshift forms on a dime — without warning and completely subconsciously, in such a sneaky way that you don't even know it's happening.

When you think of R.E.M.'s 1994 album "Monster," which is being reissued in various packages on Nov. 1, grief probably isn't the first thing that comes to mind.

You might think of harsh, bright colors — the stark orange album cover, electric-blue CD, the olive-green star shirt worn by vocalist Michael Stipe. You might think of Dan Rather, since the album's buzzsawing lead single, "What's The Frequency, Kenneth?" was a reference to the bizarre 1986 assault on the news anchor, by someone yelling a variation on the titular phrase.

You might think of a record store, since the CD album is a notorious staple of dollar bins everywhere, dumped there by people who found the extroverted sounds to be head-scratching. And you might associate "Monster" with R.E.M.'s imperial phase: They were no longer college rock darlings, but full-fledged commercial superstars who were both driving and benefitting from the alternative rock boom.

But despite outward, surface appearances, R.E.M. in the "Monster" era was navigating constantly shifting currents of grief and loss, in response to both internal and external factors. These moments of mourning were sometimes immediately earth-shaking; the impact of other seismic events, however, didn't become evident until years later.

To pinpoint the start of this mourning period, it's proper to go back to R.E.M.'s 1992 album "Automatic for the People," a moving meditation on death, mortality and the afterlife. Stark and greyscale, and driven by acoustic instruments, the album sold million copies, spawned multiple hits and pushed the band's popularity even more into the stratosphere. It was the shadowy cousin of 1991's "Out of Time," another multiplatinum success that dealt with its melancholy in a more sanguine, orchestral manner. These two albums represent a shift from light to dark — in a deliberate way.

"The transition from 'Out of Time' to 'Automatic for the People' is not just political or cultural change, but also the big transition from life into death," Stipe told Dazed in 2017. “It deals with this very difficult topic for most of us – or certainly most Americans or people who come from a Christian background. We don’t have a good relationship with death; talking about it, confronting or dealing with it."

The introspective sound on "Automatic for the People" was a manifestation of private loss. "I'd lost a great number of people around me, family and friends," Stipe told Newsweek in 1994. "My grandmother died a beautiful death. Graceful is not the right term, but she was ready to go." In the years up to and surrounding the release of "Automatic for the People," the vocalist was also a staunch activist for increased funding for AIDS research — and a vocal critic of the political response; he even once wore a hat bearing the pointed slogan "White House-Stop AIDS." In private, Stipe was also deeply affected by the emotional impact of the epidemic. "An entire community had been decimated by AIDS and, on a personal level, that had a profound impact on me," Stipe told Dazed in 2017.

However, when the band pulled a 180 and transformed into brash, swaggering, glammy rockers on "Monster," it wasn't a hard stop to this grief and sadness, rather the next iteration of these feelings because the album emerged in the wake of high-profile loss. On October 31, 1993, actor River Phoenix died from a drug overdose outside the Viper Room in Los Angeles. He was just 23.

Phoenix was very close friends with Stipe, who was devastated. "I've never suffered such a profound loss," he told Newsweek in 1994. "I couldn't write for five months." R.E.M. was in the early stages of making "Monster"— Stipe said he had two songs written — but Phoenix's death put a halt to progress, and the band didn't reconvene until February 1994 to fully dig into the album.

Despite the devastation, Stipe was firm, as he put it in that same interview, that he "was not about to write another record about death and loss." However, those plans were thrown into disarray by the April 1994 suicide of Nirvana's Kurt Cobain — another close friend and kindred spirit, as well as an avowed fan of R.E.M.'s music and ethos. After Cobain's death, Stipe told Newsweek, "at that point, I just threw my hands up and wrote 'Let Me In.'"

As Track 10 on "Monster," the song is wrenching, and buries delicate, anguished vocals underneath jagged, blurry guitars — the sonic equivalent of talking through gulping sobs — before a funereal organ coasts into the mix to layer on more sadness. It's a stunning song that looks inward, a rare exception on "Monster," whose lyrics tend to deal with painful emotions by lashing outward. "These songs are meant to be in your face," Stipe told Rolling Stone in 1994. "I kind of wanted something that was brash, fucked up and sexy. Dysfunctional. Kind of a gender-fuck train wreck just thrown out there."

Yet there's artifice built into these perspectives; it's never clear what's real and what's a put-on. That ambiguity is complicated further by Stipe's flawed characters — like the protagonist who snarls at (and refuses to cover for) an accused arsonist on the careening "Star 69," or the lovelorn character of gorgeous "Strange Currencies," who aches to make a long-distance crush real; or the ambitious, greedy protagonist of "King of Comedy," who presaged much of today's selfish business world. That the accompanying music is rife with raucous guitars and vocal distortion only magnifies the disorientation.

"When we were hearing the lyrics it seemed like a lot of the characters are obsessive and paranoid and alienated, and it seems like the effects on the vocals and the chaotic things on the guitars are a distancing factor, that they kind of mirror those feelings," guitarist Peter Buck told Mojo. In hindsight, that distance is an obvious coping mechanism; when, on "Crush With Eyeliner," Stipe purrs, "We all invent ourselves" and "What can I make myself be?" it's an attempt to obscure a true self and get away from perhaps a tough reality.

In hindsight, Stipe saw how difficult the genesis of "Monster" was. "It was hard to write and record," he recalled to Newsweek in 2014. "There was so much sadness around us at that time." Later in that same interview, the vocalist also confirmed that another common reading of "Monster" —that it's "inspired by unease with celebrity and fame"— was correct. "Keep in mind that we were at the absolute peak of our fame. Our great friends Kurt Cobain and River Phoenix had just died. And half the population saw me, unfairly, as the face of AIDS, or activist liberalism, or both. The atmosphere was very difficult. There was sadness and anguish, and a true sense of mourning and regret — combined with more typical R.E.M. themes, some of which were quite goofy or playful. It was a lot to take in."

In contemporary interviews promoting the new "Monster" reissue, both Stipe and bassist Mike Mills are even more clear-headed about how "Monster" unfolded. "I remember writing it, and I wasn’t thinking about Kurt specifically, but I was in kind of an angrily melancholic mood," the latter recalled to Vice, in reference to "Let Me In." "We were all pretty devastated by what had happened, so when Michael heard it, he thought that it would be a suitable setting for him to get some of his feelings out about Kurt.

"We were trying to make a record and deal with the shock of everything," Mills continued. "I was really proud of Michael for being brave enough to say something about the impact it had on him. I was honored that I had written something that would make him want to use it as the vehicle for his feelings, if that makes any sense. It was always super emotional to play it live, because we would gather around each other and do it as a small, intimate group, and it was always really moving."

In a separate interview with the BBC, Stipe affirmed that the song's sonic evolution from the studio to the stage — raucous and loud to moodier and introspective — was akin to a grieving process. "That was a devastating, catastrophic time for everyone. But the song and the way it's recorded, responds exactly to the moment and what it felt like to have someone that close to us take his own life. It was horrible."

A striking new remix of the album by the album's original producer, Scott Litt, which is packaged with some versions of the reissue, reveals the immediacy to the rest of "Monster." Stipe's voice drips with menace on the grungy drone "You"; is open and romantic on "Tongue"; and is sassy, blasé, and conspiratorial all at once on "Crush With Eyeliner." The contemporary version of "Let Me In," meanwhile, is stop-in-your-tracks powerful: Stipe's ragged and tender vocals are pushed to the forefront, vulnerable and weary, as the stormy guitars rage in the background.

"Let Me In" certainly looms large over the album today. But "Monster" itself has evolved to have a complex, rich legacy that goes beyond one song or interpretation; it's grown into an album people have written about for its "essential queerness" or its link to comedy, or its forward-thinking status. Unlike many '90s albums, it's an artifact with an emotional timbre that remains much more complicated, slippery and malleable than for which it's given credit.

"I've always said that R.E.M. is emotional," Stipe told Q in 1995. "The impact of the band and the sound of the voice and the music is like a visual landscape. It's not something you can put on a table and mathematically tear apart and have it make sense."