As Republicans retreat on impeachment, they fling mud at Schiff and try to get whistleblower's name on the record 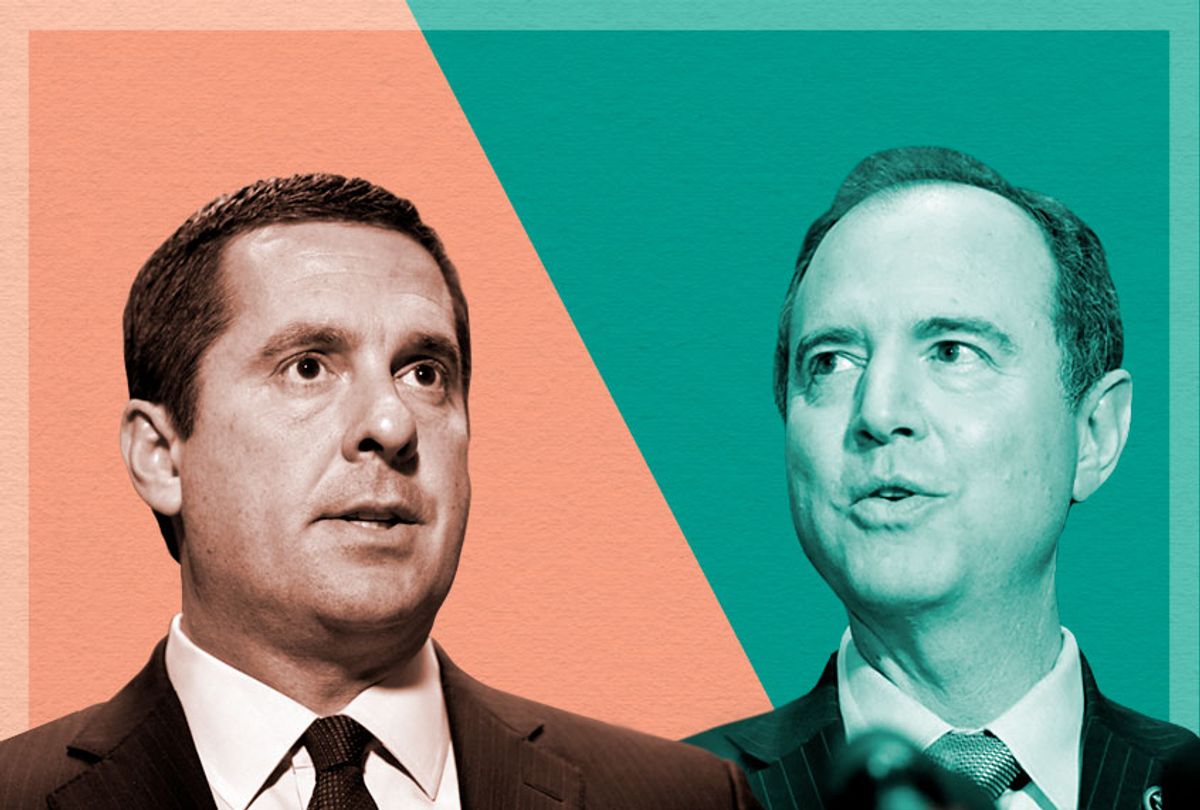 Republicans have long dismissed the evidence of Donald Trump’s political impropriety — both before and after he took office — as simply sour-grape concoctions from critics unable to come to grips with the results of the 2016 election. But it's becoming increasingly clear that Republicans may not be handling the results of the 2018 midterms all that well themselves.

After an arduous reckoning, House Speaker Nancy Pelosi finally became convinced last month that the majority of her controlling caucus supported at least an inquiry into impeaching the president. The White House’s apparent attempt to block of an intelligence community whistleblower’s complaint from Congress, and the subsequent release of an edited transcript of a call between Trump and Ukrainian President Volodymyr Zelensky, seemed to push enough Democrats in districts won by Trump to support the investigation.

Testimony from respected military officers and civil servants corroborating allegations of a quid pro quo imposed by Trump — a potentially damaging public investigation into political rival Joe Biden, in exchange for already-appropriated military aid to Ukraine — has now prompted even the most moderate Democrats in red districts to support the impeachment effort. (There were two Democrats who voted against the impeachment resolution on Thursday: Rep. Jeff Van Drew of New Jersey, who has opposed impeachment all along, and Rep. Collin Peterson of Minnesota, perhaps the most conservative Democrat in the House.)

House Republicans, having lost their majority after the so-called Blue Wave of 2018, appear to be in a state of panic and desperation. As the president reportedly begins to doubt the resolve of Republicans in the Senate, his loudest defenders in the House are amping up their baseless procedural complaints to muddy the waters in the face of mounting evidence.

Rep. Rob Woodall offered the first amendment to Democrats’ formal impeachment resolution dictating the rules for the inquiry, which the House approved by a 232-196 vote on Thursday. The Georgia Republican proposed cutting the House Intelligence Committee, which has the fewest number of Republicans, entirely out of the process in favor of the House Judiciary Committee, which includes some of Trump’s most ferocious defenders, as the lead committee overseeing impeachment.

Republicans have a new target: Rep. Adam Schiff, D-Calif., who replaced Trump lackey Devin Nunes, R-Calif., as chairman of the Intelligence Committee after Democrats won back the House. They see Schiff as a weak link in the Democratic hierarchy who they can use as a foil for impeachment.

“I’m sorry, Adam Schiff is not an independent counsel!” Rep. Debbie Lesko, R-Ariz., complained on Wednesday, claiming that Schiff has made public statements in support of impeachment. At least 50 Senate Republicans have signed onto a bill condemning the House impeachment inquiry despite their likely roles as jurors in an eventual impeachment trial.

House Minority Whip Steve Scalise, R-La., called on Pelosi "to declare a mistrial" and accused Schiff of witness tampering by "directing witnesses not to answer questions that he doesn’t want the witness to answer if they’re asked by Republicans.”

The Louisiana Republican railed: “That might be what they do in the Soviet Union, not the United States of America. We can’t stand for this!” (They haven't done anything in the Soviet Union since it was dissolved in 1991. But let's move on.)

Apparently not too pleased with the punch of “kangaroo court,” Republicans seem to have agreed on "Soviet-style" as their coordinated term of abuse for the Democratic inquiry.

'Schiff has himself a sneaky new trick for his impeachment charade here in his Capitol basement bunker,” Rep. Lee Zeldin, R-N.Y., wrote on Twitter. “On top of being the prosecutor, judge AND jury in his self described grand jury, he’s trying out his witness coaching skills & it’s a mess. This really is a Soviet style trial.”

Rep. Matt Gaetz, the Florida Republican who infamously led a flock of Republicans into a secure area of the Capitol to delay the planned testimony of the top Pentagon official on Ukraine last week, filed an ethics complaint against Schiff claiming that the Intel chair has been discredited as a dishonest broker. Schiff, Gaetz contends, did not conduct himself credibly when he presented a theatrical reading of Trump’s phone call with Zelensky and should not take on a lead investigator role. Even as parody, however, Schiff's paraphrase was more accurate than Trump's spin on the call.

Republicans have also expressed outrage over Schiff's supposed prior relationship with the whistleblower, although there's no evidence any such relationship exists. All that's been reported is that the whistleblower met with an Intelligence Committee aide seeking guidance before filing the complaint.

"Schiff and his staff had access to the whistleblower and were complicit with this complaint being filed, which started this entire charade  — this entire impeachment inquiry," Rep. Michael McCaul, R-Texas, complained on Fox News. Nunes also appeared on Fox News, falsely claiming that Schiff had "met" the whistleblower.
Meanwhile, people in Nunes’ orbit were reportedly feeding propaganda on the Ukraine affair to other Republicans and interfering with Trump's access to good information on the region.

Lt. Col. Alexander Vindman reportedly told lawmakers that he was instructed not to debrief Trump on his May visit with the recently inaugurated Ukrainian president so as to avoid “an uncomfortable situation.” According to Politico’s account of Vindman’s closed-door testimony: “Trump believed at the time that Kashyap Patel, a longtime Nunes staffer who joined the White House in February and had no discernible Ukraine experience or expertise, was actually the NSC’s top Ukraine expert instead of Vindman.”

Patel got his position on the National Security Council after overseeing Nunes’ campaign to discredit the FBI investigation into the Trump campaign’s ties to Russia.

Nunes said on Fox News after Vindman testified that "Schiff is very good at coaching witnesses.”

Another Nunes staffer on the House Intelligence Committee reportedly revealed the original whistleblower’s identity to several House Republicans. GOP members attending the closed-door depositions have reportedly repeated that person's name multiple times, in hopes of getting it on the recorded transcript, which according to Thursday's resolution will ultimately be released. Various right-wing websites have reported on this, publishing the alleged whistleblower's name. Gaetz, apparently unconcerned about that person’s safety or with the principle of protecting whistleblowers, tweeted out one such story, writing that it is “explosive reporting on the bizarrely political efforts to frame Trump.”

Schiff, whom Fox News' Gregg Jarrett has called "the master manipulator," told reporters that Democrats will "make every effort to make sure that, notwithstanding the president or his allies' desire to come out and exact political revenge on this whistleblower, that our committee is never used for that purpose."