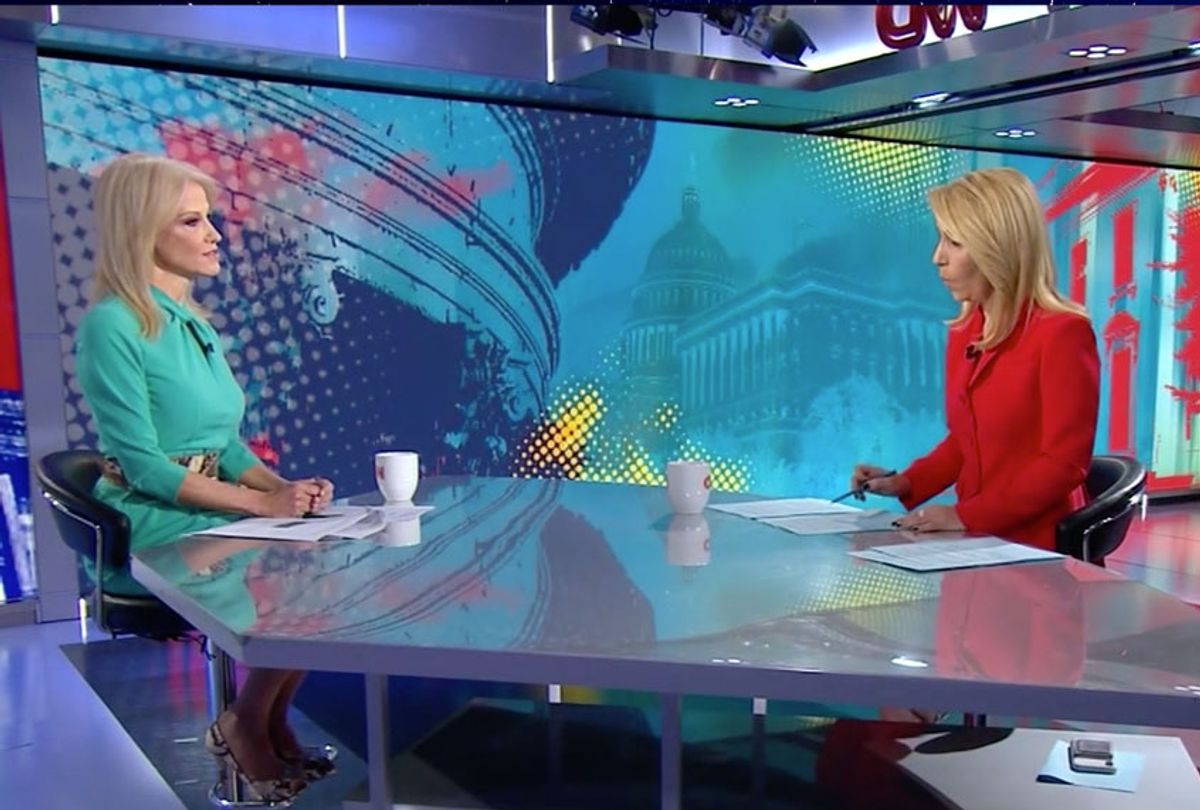 White House adviser Kellyanne Conway could not definitively say to CNN's Dana Bash whether or not there was a quid pro quo involving President Donald Trump and military aid to Ukraine, saying "I don't know whether aid was being held up and for how long." (CNN)
--

There is no shortage of genuine drama heading into the 2020 election, but CNN continues to prefer cheap thrills over digging into what’s at stake with serious reporting, insight and expertise.

On Sunday, CNN brought chief White House befuddler Kellyanne Conway onto “State of the Union” so Dana Bash could waste what felt like hours failing to get Conway to acknowledge a few simple facts that are already fully established by gobs of incontrovertible evidence. (“Can you say definitively no quid pro quo for this military aid?”)

And last week, CNN appropriately caught vast amounts of flak for having put Trump apologist/gaslighter/dimwit Sean Duffy on its payroll to infuriate the network’s own anchors by spouting conspiracy theories and lashing out in a profoundly prejudiced way at a decorated veteran who came forward to speak the truth.

CNN president Jeff Zucker has said it’s important to help viewers understand what President Trump and his supporters are thinking — and he’s absolutely right. But there is nothing edifying about appearances by people like Conway or Duffy. They lie, they fabricate and they can’t genuinely explain what Donald Trump is thinking — because no one can.

What reflects CNN at its best? Not a bunch of panelists screaming at each other. The network’s main value proposition has always been that when something big happens, you can turn to CNN and they’ll help you figure out what’s going on.

“CNN has been known for context and relevance and understanding something complicated,” said former CNN anchor Soledad O’Brien (@soledadobrien), who has emerged as a powerful voice for improving political journalism. She now hosts a Hearst Television political magazine program, “Matter of Fact with Soledad O’Brien.”

When covering a disaster, for instance, CNN sends in reporters and camera crews. And the people they bring in to interview are experts, because they can help explain.

“You don’t build in a fake conflictual situation,” O’Brien told me.

As for Sean Duffy? “He’s not really hired to give clarity. He’s just playing a role.”

If CNN were honest about it, they’d say: “We intentionally pay this person to be a thrower of shit that allows our anchors to create a sense of conflict and have people yell at each other,” O’Brien said.

For the folks who run CNN, that approach has two major advantages. “There’s this idea that conflict makes good TV, so if you have someone on the left fighting someone on the right, ergo conflict, and good TV,” O’Brien said. “But I would challenge the idea that it’s a ratings-getter. No one has ever raised their hand and said, ‘I really like the screaming.’” What viewers want, she said, is “better storytelling — not just shit-stirring.”

The other advantage for CNN, O'Brien said, is that putting a few dozen people on the payroll, even at upwards of $100,000 a year, is so much cheaper than doing actual reporting. And, she said, “You can now fill an entire day with it.”

If panelists are an inevitable feature, then they should at least discuss issues, rather than just stake out positions and defend them, she said. Even someone like Duffy could add value if he were encouraged to “explain what congressmen are thinking, what kind of pressures they are under,” and so on, O'Brien said. “That might be interesting insight.”

That’s where O’Brien’s views overlap with those of Frank Sesno, another veteran of CNN, who is now the director of the School of Media and Public Affairs at George Washington University.

“I think it’s very important that CNN and MSNBC and Fox have partisans from both sides on,” Sesno told me. But they have to be credible:

If CNN can find people who are good and honest and credible and can bring some thought and independence and insight, that’s my litmus test. Are they coming on and just doing talking points and the party line and doing nothing that is truly incisive? Or are they adding an element or a point of view that actually illuminates the thinking of another vantage point — the Trump administration in this case.

It was easy for Sesno to come up with examples that didn’t pass his muster. “I never heard Jeffrey Lord acknowledge a complexity, embrace a problem or admit a wrinkle in the master plan,” Sesno said of a particularly notorious Trump defender, who was actually recommended to CNN by Trump himself. “He was as predictable as the sunrise. And he didn’t add anything. It was just this side of gibberish.”

(CNN host Anderson Cooper once shot back at Lord: “If he took a dump on his desk, you would defend it.”)

Sesno had a harder time providing an example of a Trump defender worth putting on the air, citing Rick Santorum as an example of someone who actually sometimes wrestles with complexity. “At least he acknowledges when it’s raining outside and there’s thunder and lighting and doesn’t say the sky is blue.”

The problem, Sesno said, is that “Donald Trump is making it harder and harder for people to sit in front of the camera and in a real conversation, with a straight face, explain and defend him.” Furthermore, he said, “our overall discourse has descended to such a point that to accept contradiction and complication is seen as a concession. It’s seen as not loyal enough.” In particular, it’s not seen as loyal enough by Trump.

So while Sesno said he believes in the value of having someone on a panel who can “come on the air and explain what the president did, and why,” he acknowledged that “it will be very difficult to get that format to work in the environment in which we are.”

Indeed, as Alex Shephard wrote last week for the New Republic, although Duffy “has a long, well-documented history of making inflammatory and dishonest comments,” he was “probably the best the network can get.”

Matt Gertz, a senior fellow at Media Matters for America, sees no cause for optimism about CNN.

“Sean Duffy did exactly what CNN hired him to do. He isn't there to provide scintillating commentary and keen insights, but to defend President Trump under any and all circumstances,” Gertz wrote me in an email.

“The network's core problem is that it is wedded to a model of frequent ‘from-the-right,’ ‘from-the-left,’ ‘Crossfire’-style panel segments. Under the best of circumstances, that style of journalism creates gladiatorial ‘infotainment’ that does little to inform the network's audience.”

And as bad as things were before — remember, it was way back in 2004 that Jon Stewart went on the actual “Crossfire” and begged then-hosts Paul Begala and Tucker Carlson to “stop hurting America” — Trump has made it so much worse.

“CNN panel segments that feature Trump supporters almost inevitably devolve into incoherent shoutfests,” Gertz wrote, “with the network's anchors and analysts struggling to contain the disinformation and absurdities the Trumpists employ to defend the president.”

The best way for CNN to solve this problem would be to prioritize informing their audiences and blow up their panel model. There's value in hearing the perspective of Trump and his supporters, but that can be done by airing taped comments from Trump himself, Republican members of Congress or conservative media figures on other networks, and having experts and journalists assess the validity of their statements.

A less drastic approach would be for CNN to remove the network's imprimatur from Trump's surrogates by keeping them off its payroll. Surely there are charlatans and shills willing to peddle the president's talking points on CNN for free (and if there aren't, that tells you something too). But I think there's little chance CNN will actually try to find a solution, because its executives don't think they have a problem. They are getting exactly what they paid for.

“CNN wants to position itself as occupying the center of American politics, which means CNN has to have lots of conservative voices to match the number of liberal voices, all so they can stage Both Sides debates,” wrote Daily Kos media critic Eric Boehlert. “The problem for CNN is that there are no longer any thoughtful or trustworthy Trump defenders,”

If you’re going to just bring in someone to politically balance the panel, especially if that person offers up unsubstantiated theories, hurtful rumors and blind support for one side, then intelligent discussions will devolve into pointless arguing and divisiveness. Simply bringing in a different point of view so you can brag to viewers that you’re representing all sides is not a good enough reason to put someone on TV.

Or as political scientist Norm Ornstein put it:

Two things caught my eye last week that together struck me as suggestive of an alternative way CNN could show viewers what Trump and his supporters are thinking, and discuss it intelligently.

Bobby Lewis, a researcher at Media Matters, observed the almost official passing of the White House press briefing to a new locale in the four months since Stephanie Grisham was named press secretary:

Grisham's particular innovation is to move the entire office of White House press secretary into the world of Fox News and Fox-adjacent media. After giving her first TV interview to Sinclair’s Eric Bolling (who was fired by Fox for sending unsolicited explicit photos to coworkers), Grisham did three interviews on "Fox & Friends," and one each on "Mornings with Maria Bartiromo," "Lou Dobbs Tonight," Watters’ World" and "Outnumbered Overtime with Harris Faulkner." She has also done a subsequent interview with Bolling. Instead of actually briefing the press at the White House, Grisham treats her duties as press secretary as complaining to pro-Trump pundits about how unfair everyone else is to the president.

Lewis noted in an addendum:

Hours after this piece was posted, Grisham appeared on Fox’s "America’s Newsroom." Asked when will she hold a White House briefing, Grisham said that there are no such plans and that “right now, we’re doing just fine.”

Wallace then concluded by calling them chickenshits.

Fox News is not just a TV network anymore, it is a frightening and reliable megaphone and mirror for Trump and TrumpWorld. For better or for worse, that makes it an extraordinary resource for news gathering.

It strikes me that between reporting on what Fox News says and Trump’s own tweets and remarks, that gives CNN plenty of material to help viewers understand what Trump and his supporters are thinking. They could then use those as a jumping-off point for discussions, fact-checks and expert analyses.