Seth Meyers' special lets you skip the Trump jokes, but they're not missed

In his Netflix special "Lobby Baby," the late-night comedian allows viewers to opt-out of the political material 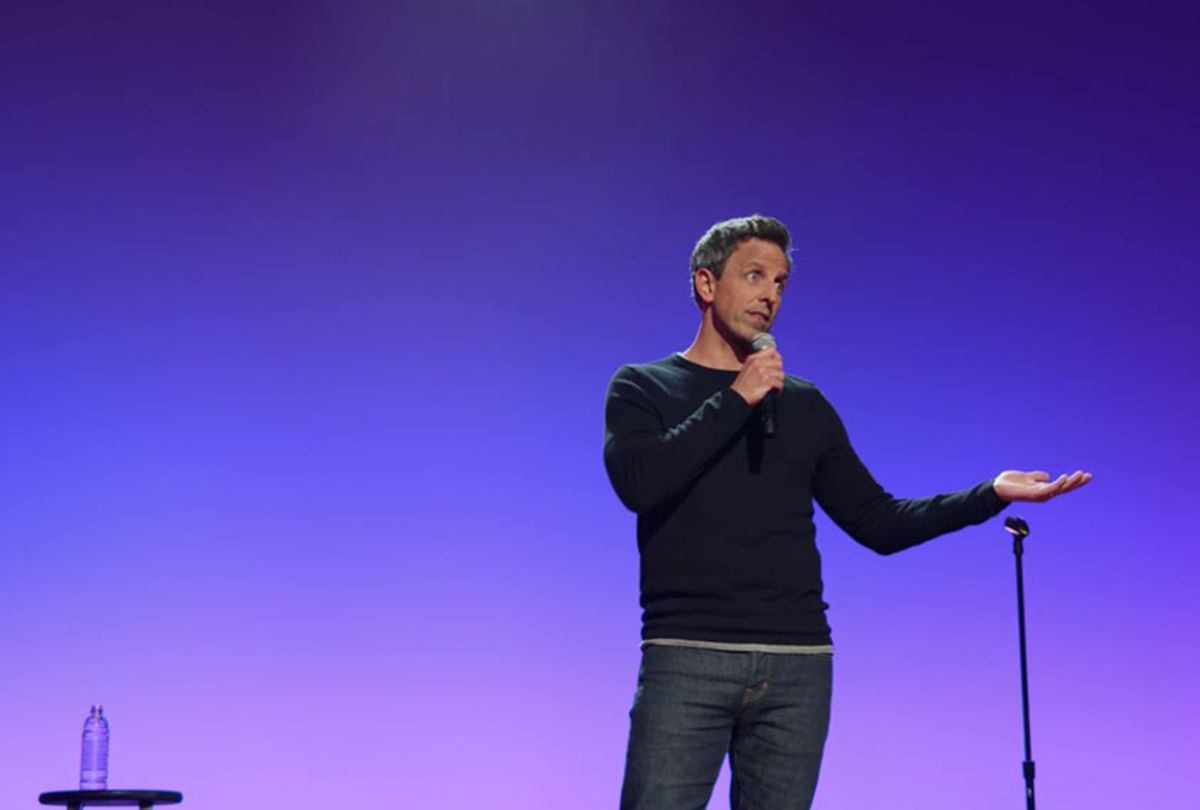 For the past few weeks, Seth Meyers has been heavily teasing the “skip politics” button in his new Netflix comedy special “Lobby Baby.” As advertised, the button, which is formatted like the streaming platform’s “skip intro” option, pops up for viewers about midway through the special which will, says Meyers,“take them to the next moment of the show when it’s not about politics.”

In a Trump-saturated America, it’s an enticing prospect; from “Saturday Night Live” to local Kia retailers’ radio ads, jokes about the President are inescapable. But as you might expect, even though the “skip politics” button works thanks to Netflix's streaming technology (perhaps perfected for navigating "Black Mirror: Bandersnatch") it's still a setup for another joke that will compel viewers to go back and see what they missed. After all, as Meyers says, "The jokes are the only good part about living through the Trump era."

The presence of the “skip politics” button is also a hint at the overall tone of “Lobby Baby.”

The rest of the special is pretty blissfully apolitical — a welcome shift for the comedian who famously torched Trump during the 2011 White House Correspondents' Dinner and whose own “Late Night” content has leaned heavily politics-centric. After all, being a late-night host during the Trump presidency, Meyers says, is like being a grave digger during the “Black Death.” All the madness, and subsequent social disruption, at least a little bit good for business.

But “Lobby Baby” is absolutely at its strongest in the moments when Meyers is talking about moments in his personal life — dating his now-wife, Alexia Ashe, a poorly planned trip to Paris, wedding planning, religion, and becoming a father. He talks about wanting a third kid. He demonstrates moves from his first dance! It’s a charming side of the comedian that we don’t often get to see on late-night, though the delivery of these jokes are just as tight and well-paced as the opening monologues on his show.

Meyers is a comedian whose onstage presence shines with professionalism, even when telling deeply emotional (and potentially harrowing?) stories like the titular “lobby baby” anecdote. Meyer and Ashe’s first baby was nearly born in the back of an Uber; their second arrived unexpectedly early as they were passing through the lobby of their apartment complex as they were heading to the hospital.

“I would describe her gait as the way you would walk if you had a wet grocery bag of oranges,” Meyer says, crouching low to the floor and cradling the imaginary orange bag/ half-born baby in his arms. “Like, ‘Okay, where . . . would love a place to put this down.’”

Meyers is acutely aware this special is at least a mild departure from the persona he presents on “Late Night.” In his opening, he says it can be very jarring to see someone out of context, “like when a kid sees a mall Santa getting into his Ford Festiva.”

“I mean, it might even be weird seeing my legs right now,” Meyers says. “It’s like that time Kermit rode a bike. It was fun, but you’re like, ‘Are those weight-bearing legs?’” But after watching “Lobby Baby,” that’s not a question that can be asked of Meyers. In a performance that is as warm as it is polished — with content that is both introspective and observational — the comedian stands on his own two feet.