"This may be the once place where I'm just going to say I'm on my own," Don Jr. tells the cast of "Fox & Friends" 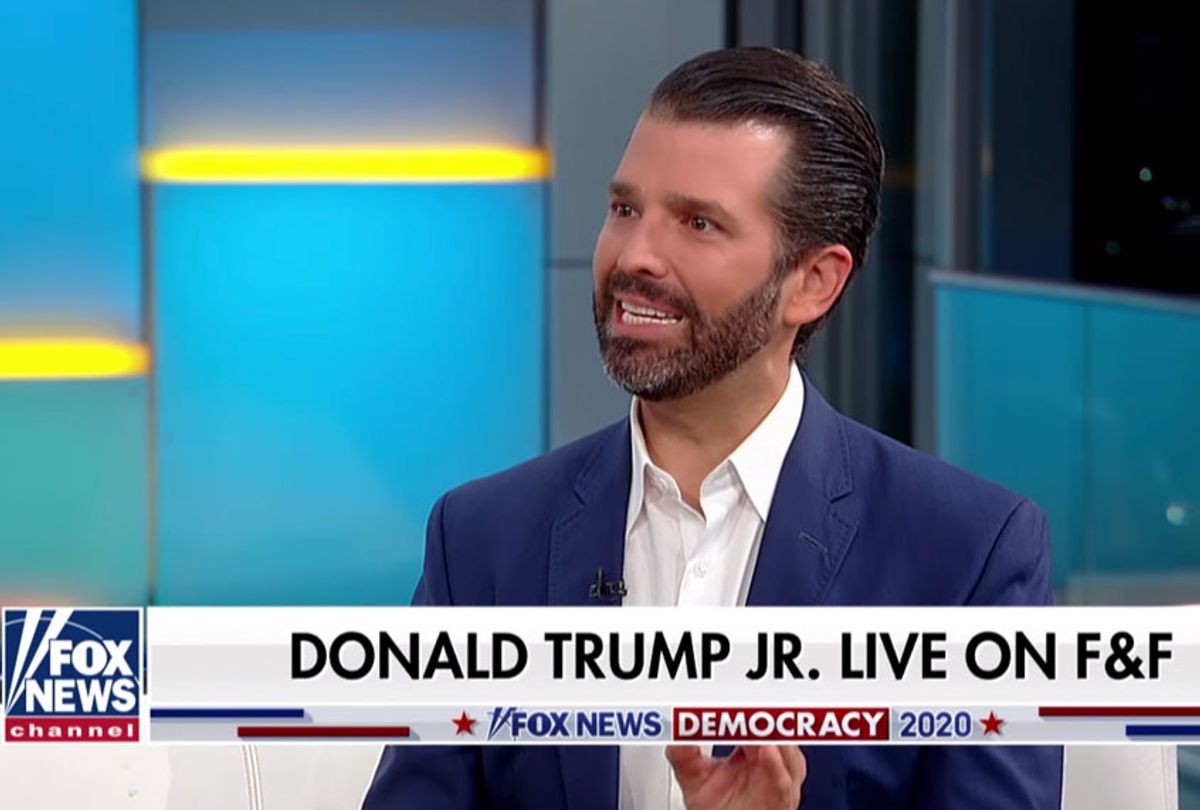 Donald Trump Jr., the eldest son of the president, told the co-hosts of "Fox & Friends" on Tuesday that his father warned him that his tweets were "getting a little hot."

"Every once in a while, I'll get that call," Trump told the hosts of the president's favorite morning show. "Like, 'Hey, you're getting a little hot on social.'"

"Don, getting a little hot," Trump said, as he impersonated his father's voice. "I go, 'Wait a minute!'"

The three co-hosts of "Fox & Friends" — Steve Doocy, Ainsley Earhardt and Brian Kilmeade — all laughed at Don Jr.'s impression of his father.

Nonetheless, Don Jr. claimed that this was a rare occasion when he took exception to his father's advice.

"But I was like, 'This may be the once place where I'm just going to say I'm on my own. Maybe you don't have the authority to start talking about this,'" Trump Jr. said of his response.

Much like his father, Don Jr. has a long history of controversial tweets. The president's son has re-tweeted far right trolls, including Mike Cernovich, the Pizzagater and anti-feminist, and Stefan Molyneux, the alt-right commentator and conspiracy theorist who claims that "globalists" secretly control the world.

Speaking to CBS News on Tuesday, the president's eldest son sought to defend himself against accusations of hypocrisy. Don Jr. has vocally criticized Hunter Biden, the son of former Vice President Joe Biden, for using his father's name to engage in foreign business ventures. The Trump children, however, have all capitalized on their famous last name in foreign business ventures of their own, and there is no evidence that Hunter Biden committed any wrongdoing while working for a Ukrainian gas company called Burisma.

"I've benefited from my father's name," Don Jr. admitted. "I'm not going to hide from that."

However, Don Jr. insisted that there was a "difference" between Hunter Biden and himself, because "Hunter Biden's getting board seats — coming back with $1.5 billion from China — because of his father's taxpayer-funded office. Hunter Biden knows nothing about energy — never invested in it in his life. He gets a board in a company — a corrupt Ukrainian oil company — in a language he doesn't speak, because his father's handling that region." (There is no evidence that Biden ever received $1.5 billion from China.)

"We were international business people . . . You can vouch for that — for decades — and more importantly, we stopped doing new deals," Don Jr. told anchor Gayle King. "We have deals that we were obligated to finish that we signed up in 2010."