Going back to the Cold War, conservatives have mistrusted the State Department and CIA as plagued with traitors 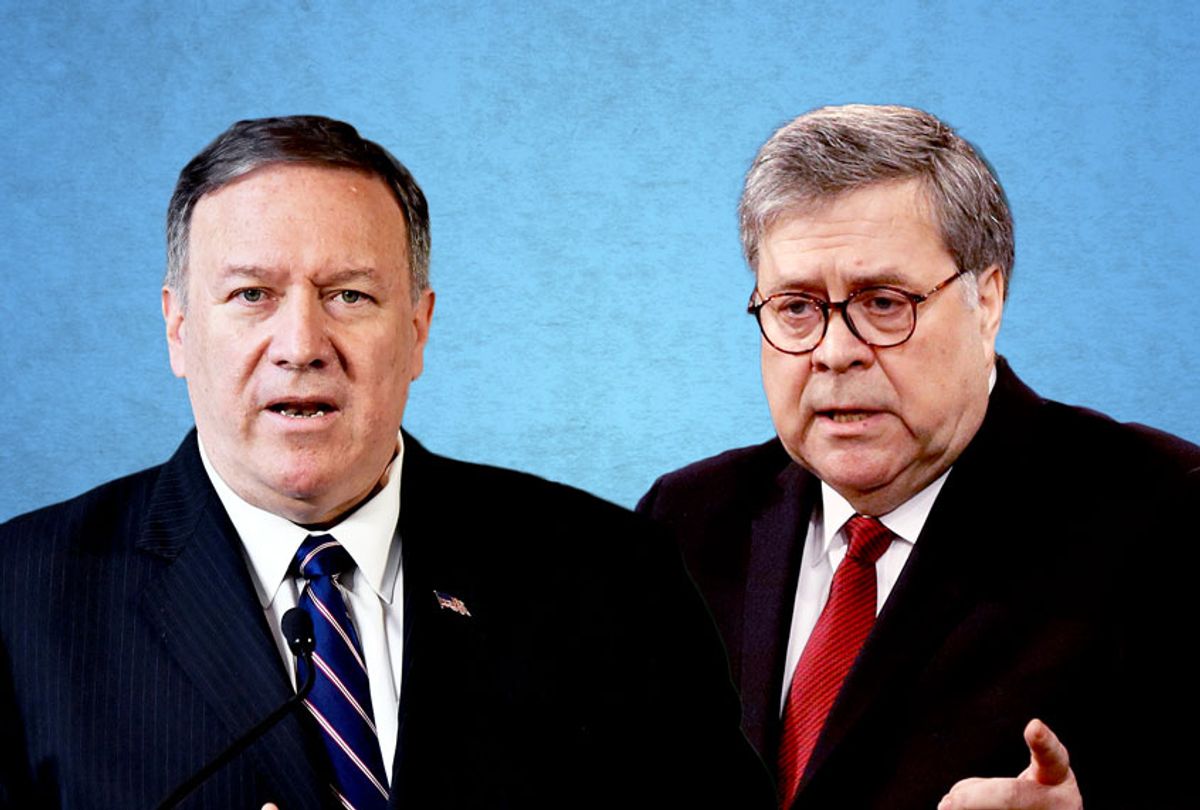 Transcripts of testimony in the impeachment inquiry have been coming fast and furious this week and they have been electrifying. EU ambassador Gordon Sondland even made a late addendum in which he admitted to presenting the Ukrainians with the quid-pro-quo deal that Donald Trump denies ever happened.

But after first demanding to see the transcripts and complaining they've been left out of the process, Republicans have now decided to hold their breath until they turn blue.

One of the most important revelations in these depositions is the fact that Secretary of State Mike Pompeo and Attorney General Bill Barr are up to their necks in this mess. As the Washington Post's Greg Sargent notes, this story shows the remarkable "degree to which this whole scheme is corrupting multiple government agencies and effectively placing them at the disposal of Trump’s reelection effort."

The New York Times took a long look at Pompeo's involvement, making the important point that he had accepted the CIA's conclusion on Russian interference when he was the director of that agency, but since he became secretary of state he's acted as an accomplice to Trump and Giuliani's addled conspiracy theory and has thrown one career State Department employee after another under the bus. As Sargent puts it, Pompeo is "a secretary of state who is essentially perverting the State Department and subverting the national interest to carry out Trump’s sordid political project."

Meanwhile, we have Barr running all over the world also trying to prove Trump's daft Ukraine conspiracy theory and show that the FBI and intelligence agencies went rogue and infiltrated the Trump campaign without good reason. One would have thought the Mueller report had dispatched such concerns, but Barr is apparently determined to prove that investigation was tainted as well.

Many people are wringing their hands and scratching their heads, wondering how the once staunch defenders of law and order in the GOP have suddenly turned into bleeding-heart libertarians, railing against the Deep State, standing up for the rights of the poor lone individual, Donald J. Trump. What happened to the Republican Party?

Well, as with everything else in this strange political era, the truth is that none of this is exactly unprecedented. Much of what is happening is just a funhouse-mirror version of Republican politics over the past 50 years.

Take, for instance, Mike Pompeo's obvious disregard for the career diplomats and foreign service personnel at the State Department. I wrote the other day about Sen. Joseph McCarthy's attacks on Gen. George Marshall and his hearings about alleged Soviet infiltration of the U.S. military. But the opening salvo of his Red Scare was against the State Department. In his famous speech in Wheeling, West Virginia, McCarthy said that he had a list with the names of more than 200 members of the Department of State who were “known communists."

In fact, Cold War hawks were always suspicious of the State Department because they saw diplomacy as soft at best and traitorous at worst, and often took the opportunity to blame that department for foreign policy failures, periodically purging the department of people they suspected of not holding "Americanist" values. (Today they are accused of being "globalists.") As recently as the Bush administration there was a move to "reform" the State Department in the wake of 9/11, led by none other than Newt Gingrich. He gave speeches and wrote articles in 2003 attacking "The Rogue State Department" for having produced honest intelligence assessments in the run-up to the Iraq invasion.

That attitude also explains a strange dichotomy with respect to how the right and left view the CIA. A couple of weeks ago Salon's Andrew O'Hehir wrote a piece reminding people on the left about the CIA's history of undemocratic and underhanded activities over the years, so we don't lose perspective as we watch this Trump debacle unfold. He was right, of course. The left has traditionally been rightfully skeptical of CIA activities, particularly after the revelations of the 1970s showing that it had essentially operated as a shadow government, carrying out assassinations and interfering in domestic political matters. Along with the FBI, the CIA was shown to have operated illegally and unethically for decades, behavior that hawks in both parties endorsed as necessary to fight "the evil empire." The reforms of the Church Commission in the 1970s, among others, were enacted to rein in the agency. But our experience with Central America in the 1980s and the torture, black sites and rendition programs of the War on Terror made clear that those reforms were only as good as a government that believed in them.

But there was another side to that story. During the 1970s, the CIA was also producing analysis showing that the Soviet military was a much less formidable threat than was being portrayed. This information was rejected by Cold War hawks who persuaded Gerald Ford to bring in "outside experts," including people like two-time Defense Secretary Donald Rumsfeld, who naturally found that the CIA's estimates were all wrong and the Soviets were on the verge of taking over the world. For years the hawks created a series of "alternate" analyses under the auspices of groups with names like "Team B" and Committee on the Present Danger. History has shown that the CIA analysis was much closer to the truth.

The right's unwillingness to accept the findings of actual intelligence continued all the way to the Iraq war, when Vice President Dick Cheney and CIA Director George Tenet refused to accept the conclusion that Saddam Hussein likely did not possess weapons of mass destruction, and almost certainly had no nuclear weapons. Instead, they "stovepiped" only the intelligence that would back up their desired goal to invade Iraq. We know how that worked out too.

All the way back to the 1970s, even as the left was rightly skeptical of CIA covert activity, it has accepted that the CIA's analysis of various threats was far more reliable, if imperfect, than anything that came out of the right-wing hawks' mouths. We find ourselves in a similar position today. The intelligence community's analysis of the 2016 election interference appears to be backed up by many foreign allies, press accounts and personal testimony, while the right's absurd counter-narrative is once again made up out of whole cloth.

So supposed pillars of the GOP establishment, like Mike Pompeo trashing his own State Department and Bill Barr running around the world trying to discredit intelligence analysis is not nearly as strange as people think. They are following a well-worn path. The only difference is that this time they're not doing it for any recognizable ideological or geopolitical purpose. They are doing what they always do, but putting it in service of Donald Trump's massive ego.