Meghan McCain confronts Don Jr. over Trump’s lack of “civility“: “Is it worth it?”

"Inflicting pain on so many people wouldn’t have been worth it for my family," McCain tells Don Jr. 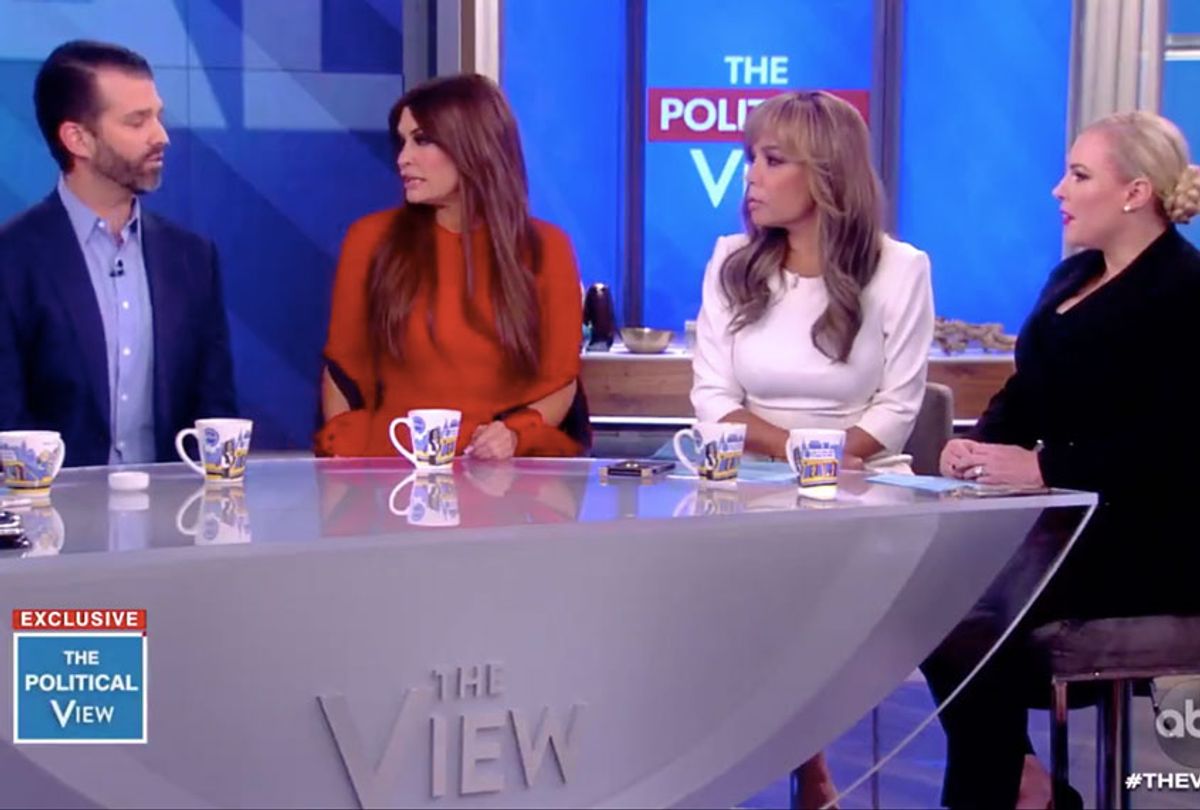 Meghan McCain confronted Donald Trump Jr. on Thursday’s edition of “The View,” asking the first son if his father’s attacks on Gold Star families made him “feel good” inside.

“I don’t think any of that makes me feel good, but I do think that we got into this because we wanted to do what’s right for America,” Trump Jr. said. “My father has been working tirelessly to bring back the American dream . . . He’s brought jobs back. He’s created unprecedented levels of unemployment numbers for African-Americans."

Don Jr. proceeded to suggest that although he understood his father had said things that were "controversial" and "offended a lot of people," it was justified because he “took on the establishment.”

“Character in politics, I believe, is important,” McCain said. “When you’re talking about attacking Gold Star families who have given the ultimate sacrifice . . . and you put them through pain. Does it make you feel like this was worth it?”

“He has a lot of care for those people, but he’s under constant attack,” Don Jr. responded. “He’s a counter-puncher. As a conservative, I hope that you would appreciate that conservatives haven’t been known for fighting back. They’ve ceded ground to the liberals and the liberal elite for decades by not actually fighting back . . . I think he has great character.”

“I understand, and I’m sorry about that," Don Jr. said. "They did have differences. I agree with that."

“It’s just that, for me, it would not have been worth it.” McCain said. “People can go to the moment when my dad stopped someone from saying that Obama was a Muslim. Inflicting pain on so many people wouldn’t have been worth it for my family. So I just want to know: Is it worth it?”

“As a citizen, as a father, it hasn’t exactly been peaches and cream for us either,” Don Jr. replied. “But it is worth it when I go around the country, and I see people who are affected by these policies . . . How they’re so happy that they voted for my father.”

Don Jr.’s girlfriend, the former Fox News host Kimberly Guilfoyle, who was seated next to Trump at the table, added that she had considered John McCain to “be my friend.”

“This is tough,” Guilfoyle continued. “I would like there to be more civility and not personal attacks.”

“If you believe that — and we did work together, and I do know you — try and bring civility back then,” McCain replied. “You can do it.”

“It goes both ways,” Guilfoyle insisted, alleging that “93 percent negative media coverage” about Trump — a years-old stat which has largely been refuted.

“You’re at the White House,” co-host Abby Huntsman shot back. “You guys are at the top."

“Suck it up,” moderator Whoopi Goldberg added. “Obama was elected, and the first thing that was said to him from the other side was: ‘We’re going to make sure you’re a one-term president’ . . . Mitch McConnell said it. This is part of being president. Part of being president is having a pair that can take whatever comes toward you.”

“I promise you my father’s got a pair," Don Jr. replied, insisting that "no sitting president has taken the heat that Donald Trump has taken."

“He also called Mexicans rapists . . . He attacked the handicapped. We heard the Access [Hollywood] tape where he bragged about grabbing women by their genitalia,” co-host Joy Behar added. “That’s what Meghan is talking about. She’s talking about lowering the discourse to his level, which is horrible for this country. Even if people are working, we don’t want to have a country like that.”

The talk about civility appeared to fall on deaf ears as Don Jr. countered Behar’s claim by accusing her of having worn blackface and alleging that Goldberg had defended Roman Polanski amid statutory rape charges more than a decade earlier. The segment devolved as the co-hosts defended themselves before tossing to commercial break.