Is Mitch McConnell afraid this Kentucky sports radio host will run against him?

Republicans forced a popular Kentucky radio host off the air, and fans are rallying with #FreeMattJones 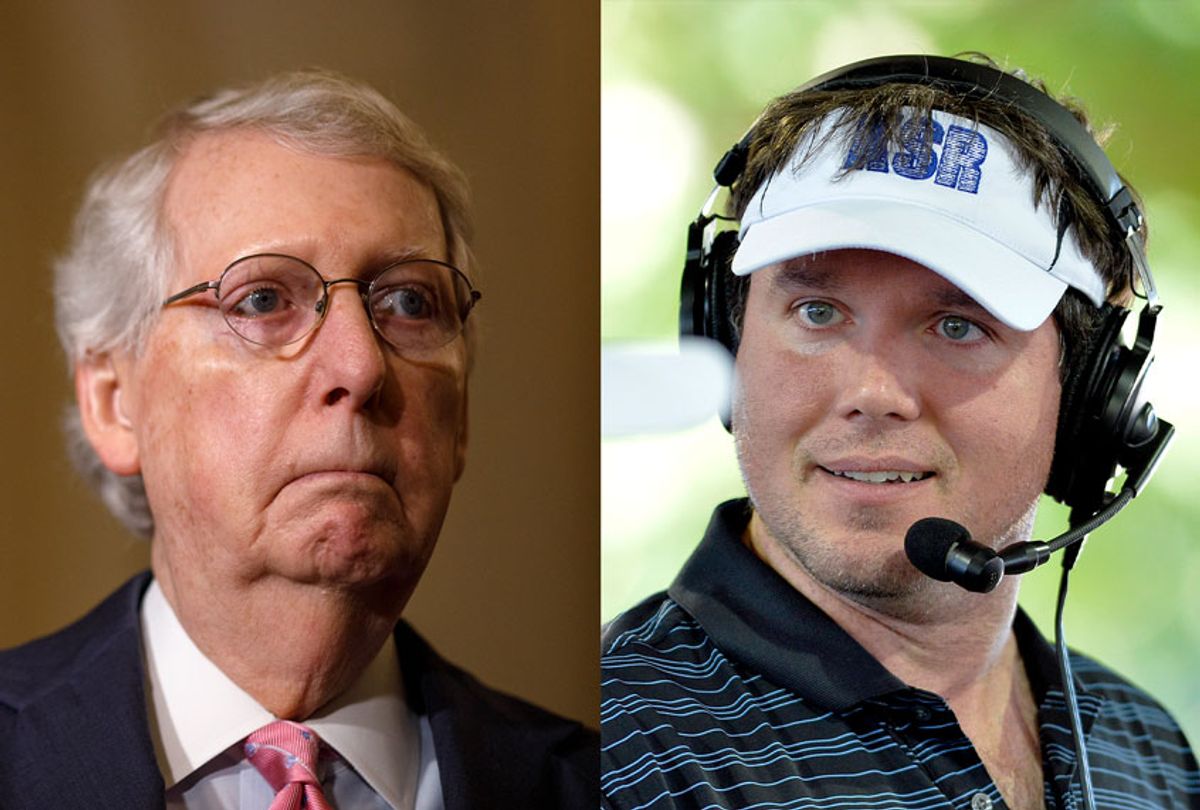 In the hours after Matt Jones, the prominent liberal sports radio host from Kentucky, announced he was forced to take a leave of absence from the show, thousands of people took to Twitter to express support for him with the hashtag #FreeMattJones.

Jones, the host of Kentucky Sports Radio, got the boot after the Republican Party of Kentucky filed a complaint with the Federal Election Commission accusing him of violating campaign finance laws.

The complaint, filed earlier this week by Republican Party of Kentucky Chairman J. McCauley Brown, claims that Jones, a Democrat who has been flirting with a Senate run against Majority Leader Mitch McConnell, R-Ky., has failed to disclose contributions to his campaign from his media gigs — specifically from iHeartRadio, the distributor of his radio show, and Simon & Schuster, which is set to publish a book by Jones that is critical of McConnell. The case argues that Jones is using the radio show to promote his candidacy and that funding and spending for his travel around the state for the book should be reported as campaign finances.

"Matt Jones must be held accountable immediately for misusing multiple platforms paid for by his corporate sponsors to unlawfully promote his U.S. Senate candidacy," Brown said in a statement. "His attempts to conceal these violations from both the FEC and the public only heighten their severity. RPK's complaint is an important first step in stopping Jones' flagrant failure to comply with federal regulations and we urge the FEC to deliver a swift and strong penalty."

In a phone interview Thursday, Jones called the allegations "nonsense" and "very disappointing" but said he wasn't surprised by the RPK's decision to file a complaint against him even before he declared his candidacy. Earlier this year, Jones filed paperwork with the FEC to form an exploratory committee and subsequently filed disbursement reports. The agency doesn't require exploratory committees to file reports until a candidate's bid becomes official.

"To me, this is odd and suggests they feel threatened, which is amazing because I haven't even decided if I'm going to run or not," he said. "I created an exploratory committee because I wanted to be completely transparent — and now they're using that transparency against me, even though I'm not a candidate at this point. I haven't raised money anytime recently. I had never used the radio show or the book to raise money. It's nonsense but it's just Mitch McConnell's bully mentality to be used against anyone who would dare consider public office.

"The book isn't even written yet and he's already scared of it," Jones added. "It's absurd to me."

Jones argued that by getting him off the air, McConnell's campaign has accomplished nothing other than infuriate the hundreds of thousands of Kentucky voters who tune in to his show daily. He said the support he has received from Kentuckians since the decision was made has been "unbelievable" and "showcases how people who don't have a connection to Kentucky, and I'd say Sen. McConnell is in this group, don't realize what it is that actually moves Kentuckians. . . . To take [KSR] away for petty political reasons was, of course, going to be met with negative response."

"75% of my listeners are conservative," he added. "This is not a group of liberals being upset. These are conservatives — mostly rural Kentuckians, the Republican and Trump base — that Mitch McConnell just made angry."

McConnell's campaign manager Kevin Golden told Salon, "Team Mitch has absolutely no concern about Matt's show. It appears that his business relationships are concerned with his ability to comply with federal law."

It's unclear what will happen next with the FEC complaint. Christian Hilland, deputy press officer at the FEC, told Salon that all enforcement cases remain confidential until they are resolved, but noted the agency is currently operating without the legally-required four member quorum and thus cannot take action on any enforcement matters. (Notably, not a single commissioner has been confirmed since McConnell took the reins as Senate majority leader in 2015. The FEC, which is supposed to have six members, has just three.)

The case is not the first time Kentucky politics has forced Jones off the air.

In August, after Jones announced he was writing a book — to be titled "Mitch, Please" — NBC affiliate WLEX gave Jones the boot from hosting its nightly sports and news recap program "Hey Kentucky!" At the time, the general manager of the station said that WLEX has an "obligation to fairness across its platforms."

The decision to pull Jones from the show came roughly a month after Amy McGrath, a Democrat and former Marine Corps fighter pilot who narrowly lost a House race in 2018, launched a Senate bid for McConnell's seat. Jones has claimed McGrath's campaign was behind his dismissal from WLEX. McGrath's campaign previously denied it was involved in the decision. The campaign did not respond to Salon's request for comment.

"I've now been hit on both sides. The Democrat, Amy McGrath, got me taken off the television show. And now, McConnell got me taken off the radio show," Jones said. "It just goes to show that the establishment really hates any potential outsider who wants to make change."

"[McConnell] sure made a tactical error in filing the complaint. He took away a radio show that was infinitely more popular than my television show a day after Kentucky beats the number one team in America in basketball in the first game of the season. I was on the radio until 2:30 a.m. taking phone calls from callers, celebrating," Jones said. "The next morning our show was listened to by the whole state. That's when he decides to do it. And Kentucky plays their biggest football game of the year this Saturday. He chooses the time when people care the most about UK sports to go take off the most popular show. It just shows he has no understanding of Kentucky."

Despite being asked to leave KSR for the time being, Jones said he does not blame iHeartRadio and understands their decision. He noted that he hopes to return to the show if he decides not to run for office.

"There is no reason to get mad at a sports radio show in Kentucky. Mitch McConnell can get on any TV network at any time. He has access to every form of media possible. And here is this radio show in Kentucky — started in a basement, built from the ground up to have affiliates in small towns across the state — and he doesn't like what they say so he tries to take it off the air," Jones said. "That's scary in America. It's a perfect example of how people in positions of power can quash anything that goes against what they want."

The radio host said he is considering running for a seat in the Senate, in which he would take on McGrath in the primary and potentially McConnell in the general election, because he thinks "there is no politician in the Republican or Democratic Party who truly cares about the citizens of the state — and they need a voice."

"The Democratic Party doesn't care about rural people from Kentucky. Mitch McConnell doesn't care about people from Kentucky anywhere. I do, and somebody needs to fight for them. That's why I've considered it," he continued. "McConnell has done nothing for the state that he represents, and it would be a mistake for me not to at least consider it because I think I may have the best change of potentially beating him."

Earlier this week, Attorney General Andy Beshear, a Democrat, came out on top in Kentucky's gubernatorial race against incumbent Republican Matt Bevin, leaving many to speculate about the political fates of other Kentucky Republicans next year, in a state where Trump won by 30 percentage points in 2016. Though Trump remains popular in the state, the election outcome suggested that Republicans cannot take red-state races for granted.

Allies of McConnell argued that Bevin's poor showing in Kentucky did not spell trouble for the senator, who is working to keep Senate Republicans strongly united as Trump faces an impeachment inquiry in the House of Representatives.

Early Tuesday morning, Trump tweeted, "Based on the Kentucky results, Mitch McConnell will win BIG in Kentucky next year!"

Jones also argued that the recent election probably doesn't have big implications for McConnell, who is as unpopular in his home state as Bevin. To defeat McConnell, Jones said, Democrats have to stop running "mainstream candidates who don't know anything about the state," adding McGrath, who was recruited to challenge McConnell by Senate Minority Leader Chuck Schumer, D-N.Y., has "no chance of winning because she can't connect with the state."

Though Jones said both parties are not doing what's necessary for the people of Kentucky, he ruled out running as an independent — if he runs, he'll run as a Democrat. He said he will make a decision on whether to jump into the Senate race "soon."