Press Watch: Dems could make the case on impeachment — journalists could still say they failed 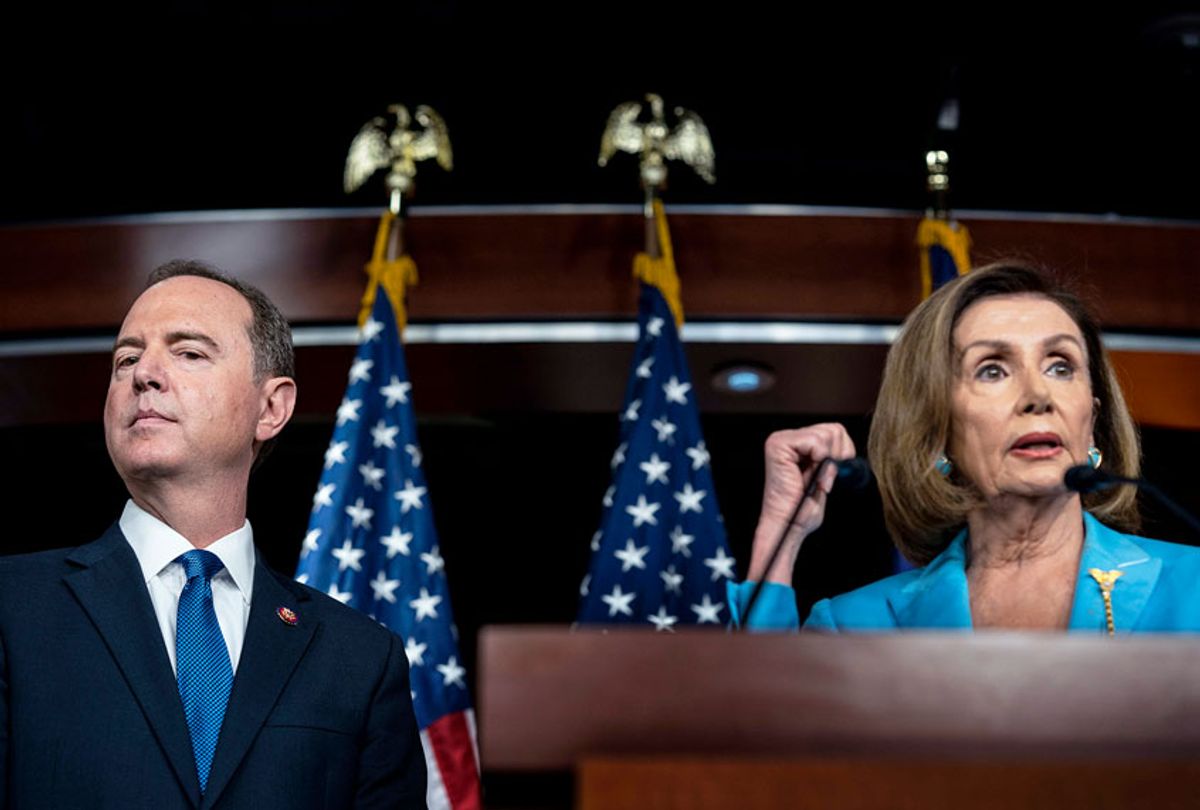 The public impeachment hearings that begin next week will give the American people their first chance to hear from and judge the credibility of key witnesses who will describe how President Trump used the power of his office to pressure the Ukrainian government to open criminal investigations that he hoped would help him politically.

A small percentage of Americans will be raptly watching every minute. But the vast majority will learn about the hearings through the media.

Fox News and other extremist right-wing sources will most assuredly deliver a warped and fantastical pro-Trump assessment.

But there is also a distinct danger that many members of the traditional political media will set the bar so high for theatrics, zingy soundbites and dramatic new revelations that even if the hearings succeed in laying out a ruinous case against the president, they will be judged a failure.

Indeed, to the extent that they look for cheap theatrics and soundbites, reporters will be more likely to find them coming from Republican House members unleashing conspiracy theories and snarling personal attacks than from the witnesses, who for the most part will be sober public servants.

If reporters only heed information that comes as news to those who have obsessively taken in every twist and turn of the investigation so far — including the hundreds of pages of transcripts of closed-door testimony already given by these witnesses — they will declare the hearings a missed opportunity.

These are not purely hypothetical concerns.

Members of the elite political media blew it spectacularly in just those ways in July, when they judged special counsel Robert Mueller’s testimony before Congress to be a dud — “The Blockbuster That Wasn’t” – because Mueller failed to emote even as he confirmed the devastating conclusions about Trump’s obstruction of justice and the ongoing threat of foreign interference in U.S. elections that he had previously laid out in a report that most Americans hadn’t read. (See, for instance, this deeply bitter Twitter thread from business journalist Heidi Moore @moorehn.)

And while the upcoming hearings will obviously be hugely damaging to Trump, some reporters just can’t prevent themselves from worrying out loud that the real danger is to Democrats.

For instance, James Oliphant and Chris Kahn wrote for Reuters that the public hearings represent “a step onto more politically perilous terrain for a party seeking to persuade Americans that their cause to remove Republican Trump, who they accuse of abusing his power, is just.” The Reuters reporters focus on the need for Democrats to avoid histrionics — “They must present themselves as sober and trustworthy investigators” — while at the same time remaining cognizant that “the media looks for ‘bombshell’ moments.”

The proper analogy for the hearings is not reality TV, it’s a teach-in.

And I would argue that a teach-in is the prefect antidote for the Trump era.

The three questions that Democratic leaders have announced they are setting out to answer are not sexy. They’re not even easy to read:

House Intelligence Committee chairman Adam Schiff has warned that there will not be exciting twists and turns: “I think you will see throughout the course of the testimony — not only their testimony but many others — the most important facts are largely not contested,” he said Wednesday.

The format is also less prone to grandstanding than usual: Instead of Democrats and Republicans switching off every five minutes, trained investigators will lead much of the questioning.

The role of the critic

The central issue, when you get right down to it, is that political reporters (especially those on TV) too often allow entertainment values to subsume news values.

I recently published a primer of sorts on that topic, which extensively features some very astute observations made by New York Times TV critic James Poniewozik (@poniewozik) in his new book, “Audience of One: Donald Trump, Television and the Fracturing of America.”

So I asked Poniewozik if he worried that reporters covering next week’s hearings would obsess over theatrics, at the expense of conveying their meaning.

I could simply quote the entirety of his email back, but that would be tacky, right? So I’ll paraphrase some of it.

Theatrics do matter, he wrote, so it’s not unreasonable for reporters to pay some attention to presentation. The problem is how much and why:

My issue with the way political journos focus on “optics” and “theater” is that they see it as a convenient way of not having to engage with the substance of an event. Our media culture values “takes” but especially at legacy media outlets, there is still anxiety about political reporters saying anything that could be called “taking sides.” So focusing only on, say, Brett Kavanaugh’s affect or Robert Mueller’s stumbling over words is a way to have a take while ignoring any substantive judgments (Is this claim credible? Is this information damning?) that might get you in trouble.

But that’s not what good TV criticism — or theater criticism, or book criticism, &c, &c — does. Good criticism focuses on both the surface AND the substance. Both what the thing is saying and how it says it. One doesn’t mean anything without the other. Good critics engage with the ideas in the material. Bad critics — or the kind of glib pseudo-criticism you often get from pundits after big TV events — uses the fig leaf of “criticism” to AVOID engaging with ideas. (Likewise, taking the angle, “Here’s how I predict an audience watching at home saw the testimony” can be a way of avoiding, “Here’s what was important about this testimony.”)

Poniewozik’s elegant solution is to have “actual arts critics” cover the theatrical nature of news events while having political reporters stick with analyzing the substance. I’d be fine with that. But I wouldn’t bet on it — and neither would he.