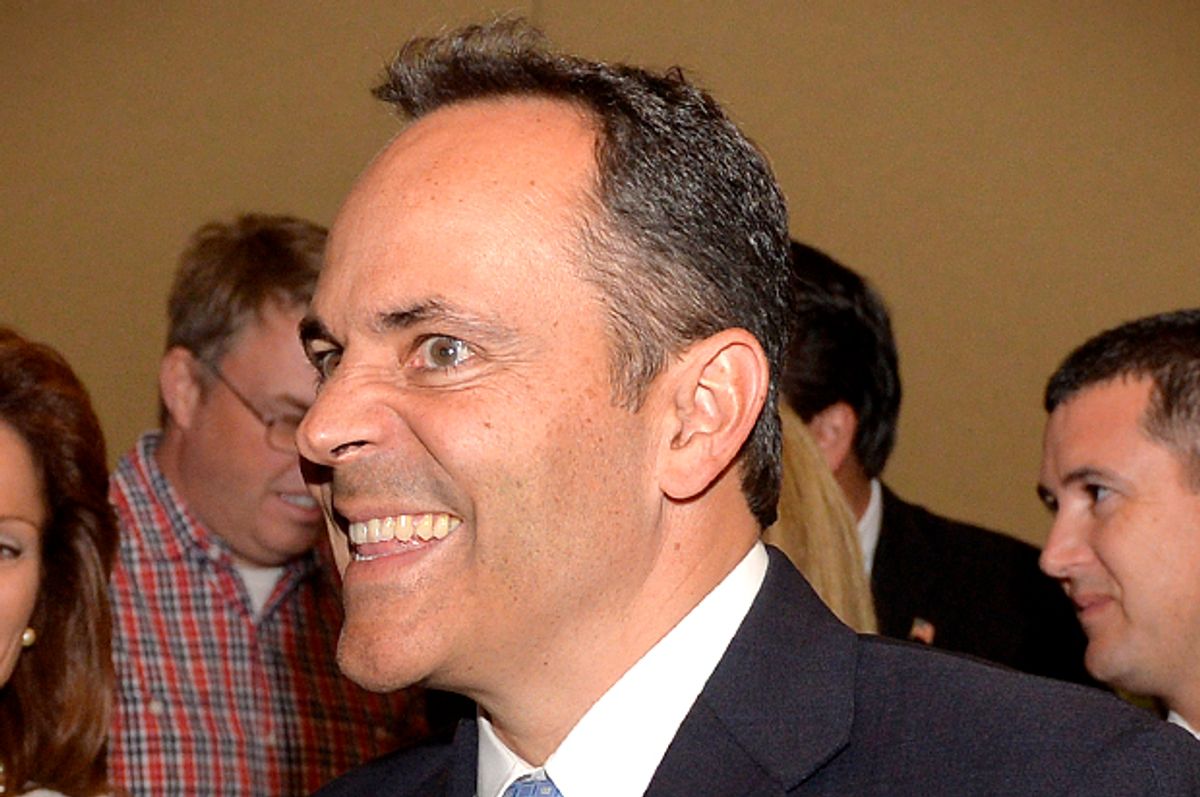 Republicans, led by President Trump, have been a united chorus of cries that any impeachment inquiry is meant to overturn the results of an election. But as they’ve suffered sweeping statewide and local electoral losses in the Trump era, they’ve grown increasingly unconstrained in their efforts to overturn unfavorable election results by attacking the democratic process.

Election integrity and transparency are two things that should engender bipartisan support. But it has been a long time since the GOP viewed democracy as anything like an ideal to be upheld rather than a system to be gamed in order to consolidate power. Their reaction to recent election losses, while hardly stunning, still manages to push the barriers of what a healthy democracy can reasonably accommodate.

In Kentucky, Republican incumbent Gov. Matt Bevin has refused to concede to Democrat Andy Beshear and has already requested a recanvass, to be conducted Nov. 14. If that process should reveal "sufficient" evidence of "irregularities," then the Republican-controlled state legislature has the legal authority to hear a case and decide the election. So at least hypothetically, the GOP can claim irregularities, get that claim rubber-stamped by a Republican judge, run the case through the Republican legislature, and then appoint the Republican governor.

Kentucky's Senate President Robert Stivers, a Republican, has already openly floated that trial balloon, arguing that if Kentuckians had simply voted differently Bevin would have won.

"There's less than one-half of 1 percent, as I understand, separating the governor and the attorney general," Stivers told reporters, backing Bevin’s decision not to concede to Beshear as “appropriate.” Stivers complained that most of the votes that went to Libertarian John Hicks, who received about 2% of the total vote, would have gone to Bevin and made him the clear winner.

In Pennsylvania, where Republicans took a history-making shellacking in the all-important Philadelphia suburbs, the Republican Party is now threatening to sue the state. The GOP claims that delays in voting in some areas caused long lines that forced people to leave the polls in frustration before casting ballots. Republicans blame the state’s Democratic governor for approving a switch to paper ballots over digital machines, a change meant to prevent hacking concerns.

A few thousand miles southwest, the chair of Arizona's Republican Party, Kelli Ward, apparently aghast at seeing Democrats flip both houses of the Virginia state legislature to take control of all three branches of government for the first time in 25 years, actually floated a state-level electoral college scheme.

“As a rural Arizona resident, it is frustrating that the state’s population centers, Phoenix and Tucson, could control politics in this conservative state,” Ward wrote on Twitter. It's a "conservative state," apparently, even if a majority of actual voters won't support conservative candidates.

In Wisconsin, where the GOP’s electoral reckoning took place over a year ago, the Republican-controlled state Senate just effectively fired a member of Democratic Gov. Tony Evers’ Cabinet, something that hasn’t happened in decades.

The Senate voted 19-14 against the confirmation of Agriculture Secretary Brad Pfaff, after slow-walking his nomination — along with nearly all other Evers appointees — for months. Pfaff’s major offense was daring to criticize the Senate majority leader for not supporting funding to reduce suicides in farm communities.

"He gets to go home tonight and say to his kids, oh by the way, for speaking my mind I have now lost my job. That’s what the state of Wisconsin Legislature, the Senate, has just told those kids at home. Get me a break," Evers complained after the vote. The governor said he now worries that his remaining unconfirmed secretaries, many of whom were nominated at the beginning of 2019, may feel the need to censor themselves for fear of Republican retaliation.

Four other nominated Cabinet secretaries are reportedly being threatened by Republican senators.

It should be assumed that a full-scale assault is underway and has been underway for decades. Apparently fearful of which way the pendulum is swinging, Republicans are responding to their recent losses by abandoning democratic norms. The movement for fair elections is at best 20 years too late.

Since the infamous 2000 Florida recount, the U.S. has had multiple close elections end in charges of voter suppression, disenfranchisement and ultimately, a Republican taking office. Republicans have closed polling sites and booted voters from the rolls. Our nation is in a period of democratic backsliding in response to a number of systemic inequities. But more than anything else, this is happening because the Republican Party has aligned itself with racists who fear the “Great Replacement” of white people.